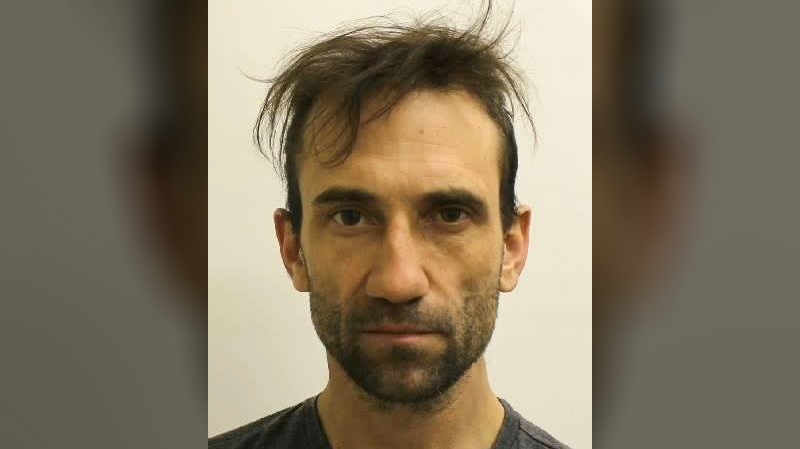 Police say Marc Joseph Pellerin escaped from custody in Truro on Friday afternoon as he was being transferred from New Brunswick to Halifax. (Truro Police Service)

HALIFAX -- A Nova Scotia man with a history of escaping custody pulled another Houdini last month by slipping his handcuffs and breaking a link in his ankle restraints before outrunning four deputies who were just steps away.

A Nova Scotia Justice Department review released Monday, says a failure to follow established protocol also contributed to Marc Joseph Pellerin's escape, which occurred as he was being moved from one van to another in the parking lot of the Truro Justice Centre on Dec. 4.

"I'm very disappointed that it happened. I think it is a concern and our big takeaway is that we have to learn some lessons from this," said Justice Minister Diana Whalen after the document's release Monday.

Pellerin was being transferred from New Brunswick to Halifax for a court appearance. He was able to evade authorities until his recapture by the RCMP three days later in Stewiacke, roughly 30 kilometres south of Truro.

The review found that Pellerin was able to free one of his hands from his handcuffs during transport due to a "unique ability to contort his hand", and was then able to break a link on the chain connecting his leg restraints, which remained secured to his ankles.

Whalen said a key element was that Pellerin was added to the transport list late in the day and a proper risk assessment was not done.

The report says the deputy sheriffs were unaware that Pellerin had previously escaped from Halifax Regional Police in 2015 and had previously attempted to escape from a Halifax area jail.

"The risk assessment would have alerted the drivers and the sheriffs that were there to be more careful," said Whalen.

The report says Pellerin was able to jump from the van during the transfer in Truro and then flee because sheriffs failed to maintain control by gripping his upper arm.

Before he ran two of the deputies were less than a metre away, while the other two were just over a metre away.

Whalen admitted that Pellerin's ability to outrun four deputies while weighted down with leg restraints that were still attached raises questions about physical conditioning. She said sheriffs undergo a fitness test upon entering the service but there aren't regular follow up tests.

"That's something for us to look at and I've asked that we compare to what RCMP do or the police or the military."

The report also found that checks were not performed to make sure the radios carried by the deputies and the closed-circuit video system inside the van were working properly.

As a result only one of the four deputy sheriffs had a working radio, while another was clipped to the console of the van and a third had a dead battery. The van's video system also wasn't working and had been reported broken a month earlier.

Fred Hildebrand, the province's director of sheriff services, said the four-wheel drive vehicle was used because of a snow storm the day of the prisoner transfer. He said the lack of video doesn't mean the deputies would have been blind inside the van.

"In that vehicle you can certainly look back and see what's going on," said Hildebrand. "Somebody should have looked to see whether his restraints were intact."

Hildebrand said the deputies involved could likely face some sort of reprimand, although no steps had been taken prior to the report's release.

Meanwhile, Whalen said the leg restraints have been sent to the manufacturer to determine whether there was a malfunction, while training and policy is being assessed and revised to prevent similar occurrences in the future.