TORONTO -- An Ontario hospital is turning Quebec's proposed restrictions on religious clothing in the public sector into a recruiting drive.

Lakeridge Health in Oshawa, Ont., is putting out an ad on social media and in Montreal's McGill student newspaper seeking doctors and nurses.

The poster depicts a woman wearing a hijab and a stethoscope with the slogan, "We don't care what's on your head, we care what's in it."

Lakeridge has about 230 vacant positions -- particularly in nursing -- and is hiring about 20 to 60 people a month.

One of Ontario's longest serving MPPs tabled a symbolic motion that calls on the legislature to oppose any bill to restrict or prohibit freedom of expression and religion in public places.

Monte Kwinter, who is Jewish, said Canada's most populous province must assure the world that it would never contemplate legislation like Quebec's charter.

Quebec's proposed "values charter" would prohibit hospital workers and other public sector workers from wearing religious clothing like hijabs, kippas and turbans in the workplace.

He said there was a mass movement of Quebec's Jewish community to Ontario when the PQ were in power 30 years ago because they were concerned about what was happening in Quebec.

There was social unrest at the time stemming from talk of separation and the introduction of Quebec's restrictive language laws.

Ontario Premier Kathleen Wynne has said the inclusive nature of Canadian society is worth preserving, and she would oppose anything that would attack that inclusion.

While polls indicate that most respondents in Quebec support the legislation, it's sparked a contentious debate elsewhere in Canada. 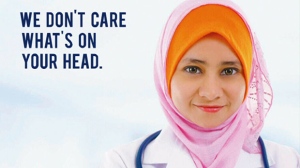