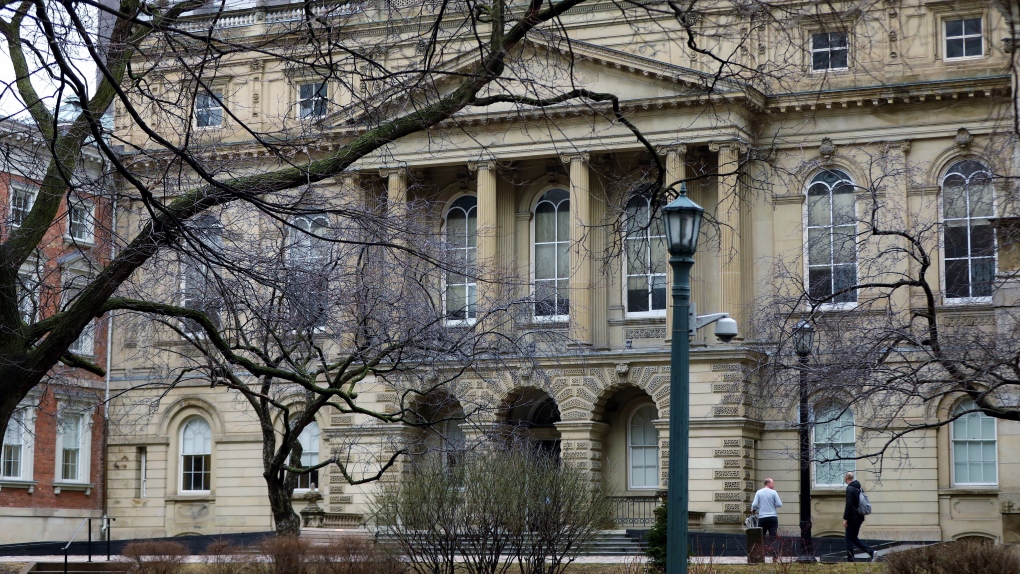 The Ontario Court of Appeal is seen in Toronto on Monday, April 8, 2019. THE CANADIAN PRESS/Colin Perkel

TORONTO -- The federal government has no choice but to tackle greenhouse gas emissions given the catastrophic impact unchecked global warming will have on Canada's Indigenous people, Ontario's top court heard on Wednesday.

As such, First Nations groups said, Ottawa's carbon-price law helps protect their constitutional rights to the hunting and fishing on which their very survival depends.

Amir Attaran, a lawyer for the northern Athabasca Chipewyan First Nation, told the Court of Appeal that scientists predict temperatures in the Far North could rise by as much as seven degrees in a single generation.

"A seven-degree change is monumental," Attaran said. "Those changes endanger their aboriginal and treaty rights."

The federal Greenhouse Gas Pollution Pricing Act, which levies a charge on gasoline, other fossil fuels and on industrial polluters, kicked in on April 1 in Ontario, Saskatchewan, Manitoba and New Brunswick -- provinces whose climate-change plans Ottawa says aren't up to national standards.

Attaran called the law a legitimate attempt to deal with an issue of national concern.

"You can have a local catastrophe that is a national emergency," Attaran said. "That deserves consideration."

The Assembly of First Nations, another of the 14 interveners in the Appeal Court hearing, agreed a national response to pollution is critical given the vulnerability of First Nations to climate change.

Canada, with about 0.5 per cent of the global population, produces two per cent of greenhouse gas emissions, court heard.

Randy Christensen, speaking for the David Suzuki Foundation, said Canada and the world will soon "pass the point of no return" in dealing with what he called a national and global emergency. The federal law was passed in response to the dire situation, and even Ontario doesn't allege there is no emergency, he said.

The act currently imposes a charge of four cents a litre on gasoline in Ontario, which Ottawa calls a regulatory charge designed to change behaviour. Ontario calls it an illegal tax that stomps on provincial jurisdiction. It wants the Court of Appeal to declare it unconstitutional.

Saskatchewan, which is awaiting its own Appeal Court ruling on a similar challenge, argues the government under Liberal Prime Minister Justin Trudeau is forcing its will on the four Conservative provinces for purely political reasons: It doesn't like their climate-change approach and is using a "big stick" to make them adopt unwelcome policies.

"This Big-Brother-Ottawa-knows-best is inimical to federalism," Saskatchewan lawyer Mitch McAdam said on Day 3 of the four-day hearing. "You need to slam the door on that Pandora's box forever."

There is no need to upend the Constitution to save the planet, he said.

In line with Ontario, Alberta's incoming premier Jason Kenny has promised to kill his province's homegrown carbon tax and fight the federal law in court.

Also Wednesday, Ontario's Progressive Conservative government put out a radio ad that claims the federal law will cost the average family up to $648 more a year by 2022. The ad ignores the fact that Ottawa is giving the money raised back to people in the provinces where it was collected.

The hearing is slated to wrap up with closing arguments on Thursday.