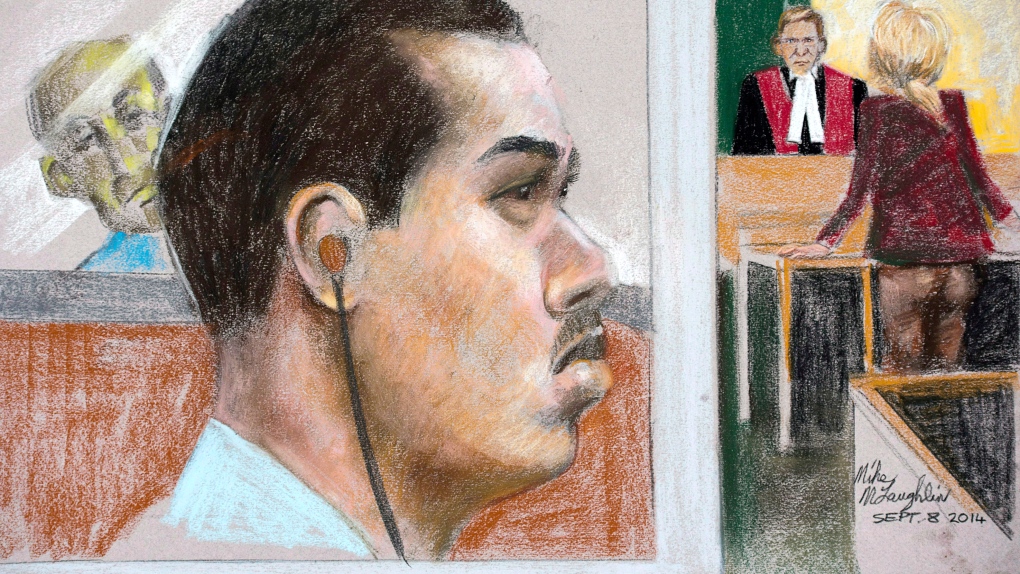 An artists' impression of Luka Magnotta during proceedings at a Montreal courthouse, Monday, Sept. 8, 2014. (Mike McLaughlin / THE CANADIAN PRESS)

MONTREAL -- A Crown psychiatrist says there were few signs Luka Rocco Magnotta was suffering from mental illness following Jun Lin's slaying but many more to suggest he could be faking or exaggerating his symptoms.

There are numerous inconsistencies between Magnotta's actions and his supposed illness, Dr. Gilles Chamberland testified at the accused's murder trial Monday.

Defence psychiatrists have said they believe Magnotta was psychotic, had been untreated for schizophrenia for at least two years and was unable to tell right from wrong the night Lin was killed in May 2012.

But Chamberland testified that, in his opinion, Magnotta's actions and version of events don't support that theory.

Magnotta's behaviour isn't compatible with someone suffering from paranoid delusion, he said.

Magnotta presented himself following the slaying as someone who was mentally ill and suffering from psychotic symptoms both before and after the killing.

He gave a different version of the death to each of the two defence psychiatrists who assessed him. He also couldn't remember many of the details.

Chamberland told the jury that people who are paranoid are often very alert, vigilant and have an excellent memory.

The surveillance video at his apartment that captures Magnotta in the days following Lin's slaying and dismemberment doesn't reveal any outward signs consistent with mental illness, Chamberland said.

Magnotta, 32, is charged with first-degree murder; criminally harassing Prime Minister Stephen Harper and other members of Parliament; mailing obscene and indecent material; committing an indignity to a body; and publishing obscene materials.

He has admitted to committing the acts but has pleaded not guilty by way of mental disorder.

The Crown has disputed the schizophrenia diagnosis and says Magnotta was faking his symptoms.

Chamberland said Magnotta told one psychiatrist he was fearful of government operatives outside his building and that Lin was one too. Despite the alleged fear, Magnotta is seen coming and going in the hours after Lin's death.

In another example, Chamberland noted Magnotta kept Lin's baseball cap despite his paranoia and after having disposed of most of his own possessions.

"It could also serve as a souvenir of a moment that marked their lives, which we find in certain people who commit these types of crimes and want to keep a memory," he said.

Chamberland said Magnotta tends to exhibit elements of borderline, histrionic and narcissistic personality disorders and those conditions are a more reasonable explanation than schizophrenia for his behaviour.

Other psychiatrists all found traits of a personality disorder, he noted.

The trial is in its 10th week and continues Tuesday.