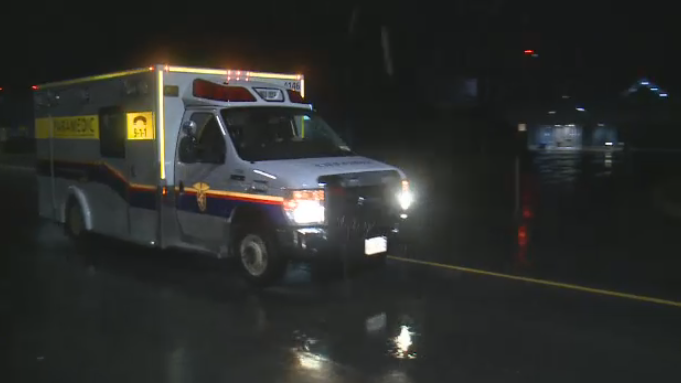 An ambulance leaves the Ottawa airport with Kitchener, Ont. resident Alex Witmer and his wife, Jennifer. Alex was diagnosed with a brain tumour during a trip to Thailand.

TORONTO -- An Ontario man diagnosed with a brain tumour during a trip to Thailand has finally arrived back on Canadian soil, where he is expected to undergo surgery soon.

Kitchener, Ont. resident Alex Witmer and his wife, Jennifer, landed in Ottawa Saturday evening. An ambulance was on site to transport the couple from the airport.

The couple, who quit their jobs before heading to Thailand for a six-week vacation, was about a month into their trip when Alex, 30, began suffering from a severe migraine.

They went to the hospital in Koh Samui and after doctors completed scans they were told that he had a tumour deep inside his brain that was cancerous.

Their insurance company, Allianz Global Assistance, initially rejected the $265,000 air ambulance flight home because Alex reported a headache during an emergency room visit in Moncton a month before their trip. On Tuesday, the insurance company reversed the decision.

Alex’s condition deteriorated rapidly in Thailand as he awaited answers from the insurance company, the couple said.

A drain was inserted into Alex’s head ahead of the flight to relieve some of the pressure, allowing him to return home.

Jennifer said the procedure was helpful.

"Alex is feeling much more himself now that he’s adjusting to the decreased pressure," Jennifer told CTV News Toronto from the hospital on Friday. "All he wants right now is to be home and see his family."

Now that Alex is back in Canada, he is expected to receive more medical tests and undergo surgery “as soon as possible,” Jennifer said.

A GoFundMe page has raised more than $78,000 in five days to help cover Alex’s care.