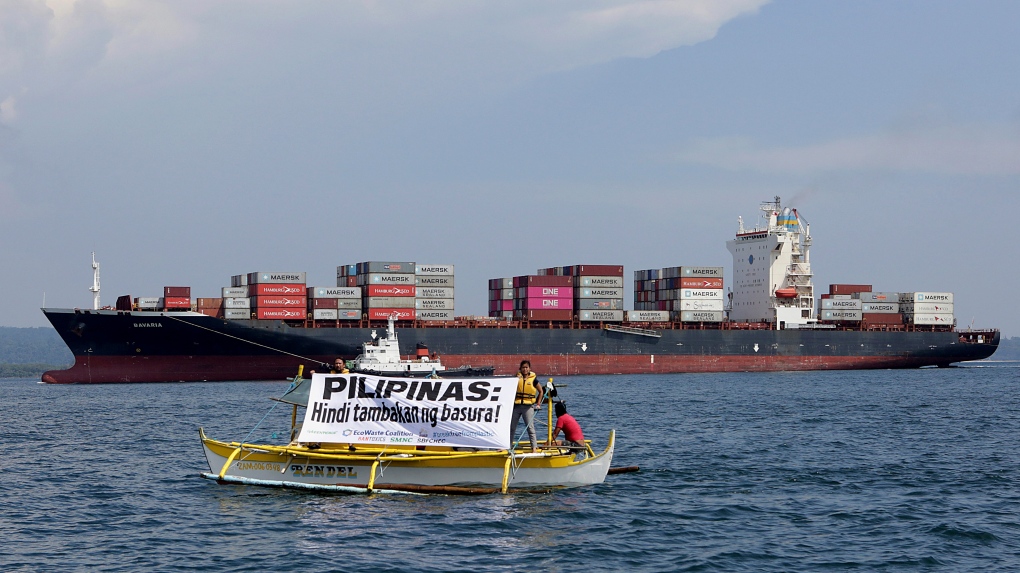 In this image released by Greenpeace, Greenpeace activists and other environmental organizations display a banner as the cargo ship MV Bavaria, the container vessel allegedly hired to ship back the 69 containers loaded with garbage from Canada, slowly enters the mouth of Subic Bay, May 30, 2019 in Subic, Zambales province west of Manila, Philippines. (Greenpeace Via AP)

OTTAWA -- There is no treasure in Canada's trash and we need to stop heaping it onto the rest of the world, environment advocates say.

The spotlight on the global shipping of garbage grew bright in recent weeks as the diplomatic fight over garbage between Canada and the Philippines gained international attention. That garbage is now on a ship headed back for Canada, but environment advocates hope the result will be more than just a rebuilding of our relationship with the Philippines.

They want Canada to stop allowing the export of waste and to cut the production and consumption of most plastic packaging.

Myra Hird, a Queen's University environmental-studies professor who runs a research group looking at the impact of Canada's waste and how waste is managed, said the only way Canada can prevent another embarrassment like the Philippines garbage shipments, is to simply ban the export of waste altogether.

"I'm not sure what the rationale for transporting our waste around the globe is because it's certainly not good for the environment," said Hird.

More than 85 per cent of plastic waste produced in Canada ends up in landfills, and about nine per cent is destined for recycling facilities. Hird says even recycling plastics comes with a significant environmental cost, with the distances they are shipped and the pollution produced in melting them down.

"Recycling has become sort of emblematic of being a good environmental citizen," she said. "The problem is it doesn't do what people think it does. It's not a solution to the generation of waste."

Canadians are among the biggest producers of waste in the world, churning out as much as two kilograms per person every day. It is one of the highest per-capita rates among developed countries. Almost half the plastic waste produced in Canada is from packaging, everything from water bottles and take-out containers to plastic wrap and clamshells for cheap electronics.

Jamie Kaminski, a board member at Zero Waste Canada, said Canada needs to make a massive shift away from single-use packaging to refillables.

"Everything we're doing has to be shifted to reusable packaging," he said.

He said it won't be a simple change, since our supply chains are so dominated by single-use plastic containers, but it's doable.

"We put a man on the moon," said Kaminski.

B.C. NDP MP Gord Johns said Canada needs to simply stop shipping waste, "full stop," and also ban single-use plastics in Canada so these products are not produced and used in the first place. Plastic waste is considered hazardous because of the pollutants it creates, particularly if it is burned.

Sarah King, head of the oceans and plastics program at Greenpeace Canada, said Canada's hand on plastics is going to be forced because more Asian nations are slamming the door shut on plastic-waste imports. China did so in 2018, which saw countries like Malaysia, Vietnam and Indonesia inundated with waste. Many of them are following China's lead and saying no to more legal imports, though the illicit trade remains a problem.

As a result, Canadian municipalities are finding fewer legitimate buyers for the waste and it's now ending up in Canadian landfills too.

"As we see more doors close it's going to be even more key for us to focus on actually stopping this problem at the source," said King. "And that's what we haven't seen enough discussion about from the federal government."

Greenpeace has compiled a list of 63 municipalities in Canada that have some form of ban or limitation on plastics, but King said leadership has to come from Ottawa and provincial governments to force a shift away from single-use disposable packaging to versions that can be reused.

Environment Minister Catherine McKenna is planning to unveil a national strategy to curb plastic use next month but earlier this year her office indicated a reluctance to enact any limits on exports of plastic waste.

Cracking down on plastic production is not without its critics. Conservative MP Marilyn Gladu said in question period Friday that the government attacked the oil industry and "now they are threatening a war on plastics."

"Well, half the jobs in my riding of Sarnia-Lambton depend on Canadian energy, pipelines and plastics," she said. "Why are the Liberals attacking the hard-working people of Sarnia-Lambton?"