Canada geese: What you may not know about the pesky national symbol 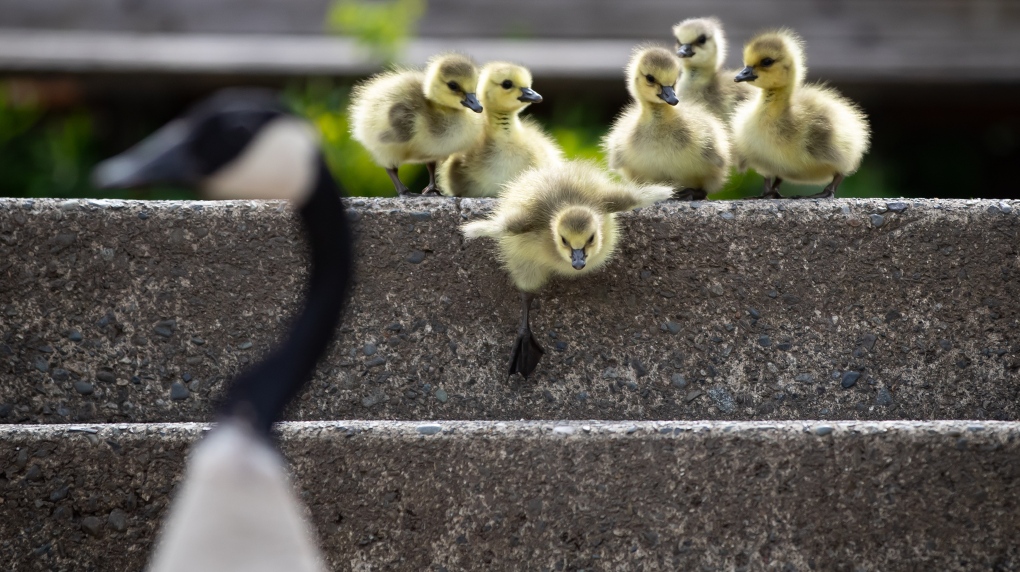 Canada geese goslings follow their parents down a set of stairs leading to the False Creek seawall in Vancouver, on Thursday, April 29, 2021. THE CANADIAN PRESS/Darryl Dyck

TORONTO -- Many Canadians are familiar with the honking and hissing that marks the beginning of the spring season, some might be more intimately familiar with the feeling of large wings batting about the sides of their head, but one thing is for certain: most Canadians have a Canada goose story.

Canada geese flying in their V formation are usually one of the first signs of the return of warm weather, but it also marks the return of the pesky waterfowl taking over our waterfronts, golf courses and parks. Here’s what you should know about the birds that have become a national symbol.

What most Canadians are referring to when they talk about enormous amounts of geese feces are giant Canada geese. Cackling geese, on the other hand, are more often what we see flying overhead in their famous V-shape.

While almost identical to look at, they are genetically different, and it’s the cackling geese that typically fly further north toward the Arctic for their nesting season. It’s the Canada geese, which stay in southern regions and in urban areas that Canadians sometimes dislike. Unsure of which you see, or hear, overhead? Canada geese have the loud honk, while cackling geese have a more high pitched cackle.

“Those that are staying south encounter human activities. Some people don't like them because they will leave a lot of droppings in the grass, and can be very aggressive because of the protection of their nest,” Jean-Francois Giroux, a professor at University of Quebec in Montreal, told CTVNews.ca in a phone interview on Tuesday.

GEESE ARE A HUMAN-MADE PROBLEM

But in a way, it’s something we’ve brought on ourselves.

“Geese are very opportunistic,” said Giroux. “They like to breed near humans because, like in Toronto or other places, there are much less predators than in the wild,”

Not to mention that some human-made structures make for perfect nesting spots.

“I've seen documentaries in Toronto, they are breeding in these large flower pots in front of restaurants and so on,” he added.

And our finely manicured lawns and golf courses are a high-quality meal for a goose.

“It's no fault of theirs, we've created the problem in providing these huge expanses of lawns and golf courses, airports and so on, and geese just love to feed on grasses,” David Bird, emeritus professor of wildlife biology at McGill University, told CTVNews.ca in a phone interview on Wednesday.

If you’ve ever ventured to the beach or park in the summer with snacks in hand, you might be familiar with geese begging for food, or getting aggressive when the food runs out. That’s because they’ve gotten used to the human connection and people feeding them.

“I just think that should be totally outlawed,” said Bird. “I would love there to be fines for people feeding geese and attracting them into public areas.”

Giroux said that feeding geese can make them more aggressive, since people are encroaching on their territory when trying to feed them.

Not only does feeding geese make them more of a pest, it’s not good for them to be eating the breads and crackers we typically take as beach snacks anyway.

They’re a bit more like humans than we might care to admit. That aggression they express when you walk too close to their nest? Think about how you might react if a stranger walked through your living room.

Family is also important for geese. When they partner up with a goose in their first year of life, they stick with that partner until one of them dies. And families tend to stay together.

“They do cluster in their families. The bigger the family unit, the higher status they have. And so, bigger families are more dominant, and they tend to overpower the small families or the single individual geese," Elizabeth Gow, ecologist at Birds Canada, and adjunct professor at the University of Guelph, told CTVNews.ca in a phone interview on Tuesday.

The aggression we experience from geese is usually a direct result of us getting too close to their family, whether they’re still in their eggs or there are small goslings around. Until the goslings can fly, the parents will remain firmly rooted on the ground.

Geese typically nest near a body of water, and that’s because they sleep on the water at night. It’s the safest place for them as coyotes and foxes can’t swim out to get them.

“They put their heads back and tuck it back into their wings and just have a nap. They probably all have lookout birds,” said Bird. ”That's one of the reasons why they flock together, is so they can keep an eye on each other.”

And if you live near a body of water where geese like to sleep, you’d be able to confirm that they’re not all sleeping at once.

“We'll have some ponds that have 7,000 to 10,000 geese on them, it's absolutely dark with birds, and it sounds like they never sleep, so there's always some birds that are awake,” said Baldwin.

ROLE IN THE ECOSYSTEM

Whether you think they are a pest or not, and no matter which way you shake it, geese do play an important role in Canada’s ecosystem.

“They are part of the food chain,” said Giroux. “They will consume other types of plants, they can fertilize these areas, but not very much. The eggs and the young can be a food for other birds of prey, of other animals.”

But they do more than just eat, poop and get eaten.

“Their bills are long and they're stout, they're kind of like our hands, and they are adapted to take seeds off of grass,” said Gow. “So, traditionally geese would be spreading seeds around different environments, and they actually helped with plant growth.”

They also clean up leftover waste in farm fields, including corn and grains. They even help pull up roots of aquatic plants.

“They’re really a foundation of the ecosystem, not just in southern Canada but throughout the country, going up all the way into the Arctic,” Frank Baldwin, waterfowl biologist for the Candian Wildlife Service, told CTVNews.ca in a Zoom interview.

Not only do they disperse seeds and clean up leftover farm waste, they also disperse things like plankton, eggs of amphibians, invertebrates and fish, he added.

While you might be sick of dodging geese feces, other ecosystems welcome it.

“Goose feces are really rich in nutrients that might be relatively absent in some ecosystems, especially in the Arctic and boreal areas where you get large concentrations of geese,” said Baldwin.

They do more than just serve as a coyote's dinner, or spread seeds around. They can also make a nutritious meal for people, and in areas where Canada geese are declared in abundance, the Canadian government allows for an additional hunting season for the waterfowl.

“There's a really specific set of parameters … which we use to declare overabundance. The population has to exhibit a rate of increase and a size that's injurious to either agricultural, environmental or similar interests, and it's really a situation where we'd like to use hunting to try and control them,” said Baldwin.

Hunting in Canada is a very regulated sport. Each province and territory has hunting regulations, and all hunters must go through a hunting education course before being licensed in their province. There are legal limits on hunting that prevent animals from being hunted into extinction.

“Hunting Canada geese is very regulated, so it is considered to be quite humane,” said Gow.

It takes time and energy to become a legal hunter in Canada, but in 2018, 720,000 geese were harvested in Canada per federal hunting permits, said Baldwin.

“So, if you think, just ballpark, what comes off of an average-sized goose, maybe a pound and a half of meat, it's probably an underestimate, but you're well over a million pounds of meat across Canada,” he added.

And the meat itself is pretty nutritious and versatile. It’s a dark meat, similar to duck.

It’s higher in iron than chicken, and has little fat because geese are a muscly bird for all their migrating, he added.

Canada has specific hunting seasons for waterfowl, and many rules and regulations dictating what sort of weapons can be used.

Ultimately, while their close proximity to humans in urban areas might be an annoyance, it isn’t all bad. It gives people a chance to experience some wildlife where they might not get to witness much of it.

“You can see birds with their freshly hatched goslings right in the nest,” he said.

And the annual arrival and departure of these migratory birds mark celebrations in some areas of Canada. In Manitoba, he said, they host migration dinners and evenings where people can go to the nature centre and watch the birds fly in.

This connection can make people reflect on the importance of conservation.

“Those are really understated aspects of having a large population, is you have this amazing contact then with people that creates a bit of an appreciation conservation,” said Baldwin.

Ultimately, it’s that flying V of migratory geese that strikes Canadians and gives us all some connection to wildlife, even for city-dwellers.

“This is kind of a symbol of wild fauna, it's important for many Canadians, and it's part of nature,” said Giroux.