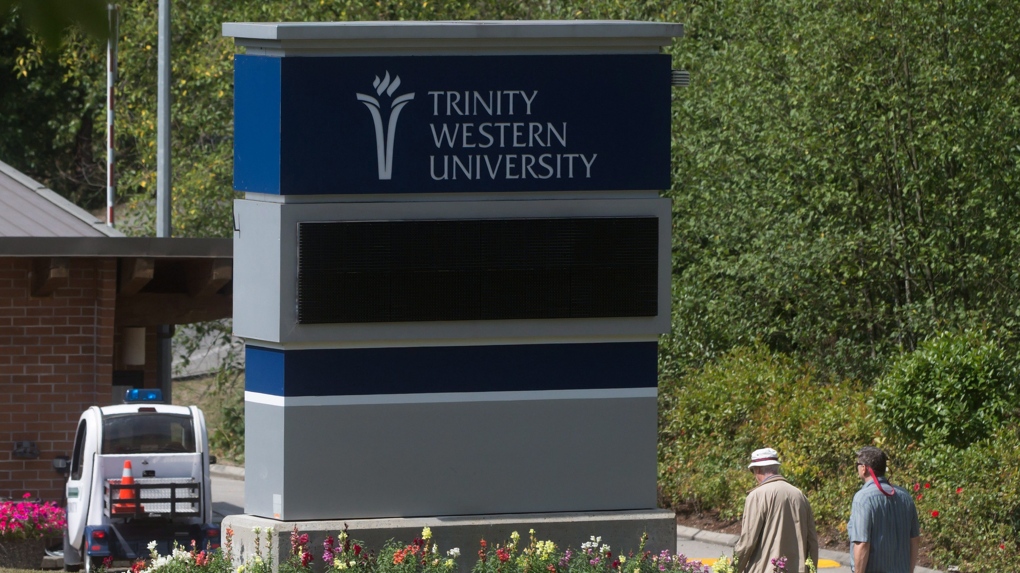 VANCOUVER -- An evangelical Christian university under fire across the country for forbidding sexual intimacy outside of heterosexual marriage has secured a decisive legal victory in its effort to open a law school in British Columbia.

In a 43-page decision issued Thursday, Hinkson rebuked the society for breaching its duty of procedural fairness and neglecting to fully consider the school's charter rights.

The society's board of directors, known as benchers, initially accredited the school in April 2014 before reversing the decision six months later after they "acted outside their authority" by deferring to a membership vote, Hinkson wrote.

The judge ruled the benchers allowed the non-binding vote to "wrongfully fetter" their discretion and "supplant" their judgment.

"The evidence is clear ... the benchers allowed the members to dictate the outcome of the matter," wrote Hinkson.

"I accept the assertion of the petitioners that they were entitled to, and find that they were deprived of, a meaningful opportunity to present their case fully and fairly."

Trinity Western has drawn controversy over a long-standing requirement that all students and staff sign a covenant pledging to abstain from sexual intimacy outside of marriage between one man and one woman.

"We are really excited," said Robertson. "The court has recognized that freedom of religion and freedom of conscience -- the freedom to believe as you wish -- is something that's important for all Canadians."

But University of British Columbia law professor Emma Cunliffe said the ruling focuses on the process that the society used to make its decision instead of the merits of whether approval should have been granted.

"The Law Society of British Columbia reached a good result by a bad process," Cunliffe said.

"The difficulty is that it does leave those who are concerned about Trinity Western's policies with no clear avenue by which to articulate their concerns about the charter rights of LGBTQ people, women and others who might be adversely affected by the covenant."

B.C. Law Society president Ken Walker said in a release that the ruling is important to the public and the legal profession but that the society needs to review the decision before deciding to appeal.

In Dec. 2014, the B.C. government revoked its original approval for the proposed law school based on uncertainty over the law society's willingness to grant accreditation.

"Trinity Western University has the option to resubmit its request to the Ministry of Advanced Education once the legal issues are resolved," said Minister Andrew Wilkinson in a statement.

The Association for Reformed Political Action, an intervener in the case, applauded the ruling.

"It affirms that the door to Canada's public square is still open for Christians, even as society is abandoning its Christian principles," Schutten said in a statement.

Kendre Milne of the women's legal advocacy group West Coast LEAF said she was disappointed the decision hinged on procedural grounds instead of engaging with the human-rights issues at stake in the case.

The proposed school is being challenged in other Canadian provinces by law societies that want to prevent accrediting the school's graduates because of the marriage policy.

In January of this year, the Nova Scotia law society's action was struck down, while Ontario Divisional Court upheld its society's decision in July. Both rulings are being appealed.

The Federation of Law Societies of Canada, along with Alberta and Saskatchewan's bar associations, have all approved accreditation, while Manitoba and Saskatchewan have put decisions on hold.

Trinity's law school was originally slated to open in the fall of 2016 but executive director Earl Phillips said earlier that classes would be delayed by at least two years.

Robertson said the law school would not open its doors before all barriers to its graduates had been removed.

The university is located in the Fraser Valley community of Langley and enrols about 4,000 students annually.

With files from Laura Kane and Tamysn Burgmann