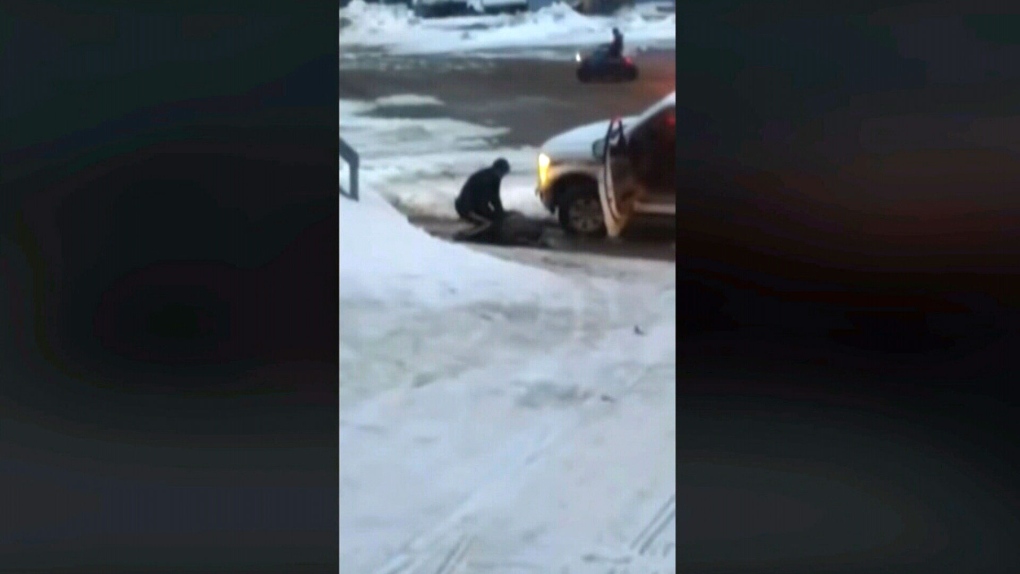 IQALUIT, NUNAVUT -- An investigation by the Ottawa Police Service has determined that the arrest of a Nunavut man who was knocked down by an RCMP truck door was lawful.

A video posted on social media in June from Kinngait showed what appeared to be a Mountie knocking down an intoxicated man using the door of a police pickup truck.

Ottawa police investigators said they interviewed 10 witnesses in the South Baffin community of about 1,400, including residents and RCMP officers. Investigators also looked at third-party video of the arrest, went to the scene and examined the police truck.

The Nunavut RCMP has an agreement with the Ottawa Police Service to review actions involving police.

Mounties said at the time that they were notified about 11:30 p.m. on June 1 about “an intoxicated male who was reported to be fighting with others.”

A video posted to Facebook by a Kinngait resident that night shows a man lying down on the side of the road. The man gets up, stumbling, before an RCMP truck flashes its lights and starts to pull up next to him. The video appears to show the officer driving the truck opening the driver's side door, knocking the man to the ground, while the truck is still moving. Four other officers arrive on the scene.

A news release Tuesday from the Ottawa Police Service said the investigation found that the officer “did not intentionally strike the community member with the vehicle door.”

“The vehicle came to a sliding stop on a snow- and ice-covered track, the driver's front tire went off the track, the vehicle dipped forward, and the opened driver's door swung forward and struck the community member.”

The release said investigators concluded that no criminal offence was committed “as the applied force was unintentional.”

“Investigators also deemed that that was no evidence of dangerous operation of a conveyance or criminal negligence and further concluded that the arrest was lawful.”

The man in the video, who was arrested for public intoxication, was not charged but was placed in an RCMP cell, where he was allegedly so severely beaten by his cellmate that he was flown to Iqaluit for medical treatment.

The RCMP officer was removed from the community after the video surfaced and placed on administrative leave. In an email, Nunavut RCMP said the officer is still on leave while an internal investigation is done.

The Civilian Review and Complaints Commission for the RCMP is also conducting an investigation, which isn't complete yet.

In a separate release, the Nunavut RCMP said it will not comment further on what happened.

“Police occupy a place of public trust and the public has an interest in how they go about their jobs. We're owed an explanation when something happens. What we got was a conclusion. There's no transparency and no accountability,” Cowan said.

“We've all seen that video and we know that the police explanation doesn't explain everything we see in that video.”

Cowan said even if people accept the truck door hitting the man was an accident, it is troubling to say the arrest was lawful.

“On what basis was it justified that five police officers be involved in the takedown of this man?”

Cowan said Ottawa police also don't explain why the RCMP acted so swiftly to arrest a man who was never charged.

“Why on earth, if it was public intoxication, would you drive so close and put someone at risk?”

The agreement between the Ottawa Police Service and the Nunavut government does not require the service to make its reports public.

Nunavut introduced legislation in the fall that would allow it to use civilian investigative groups instead of police forces.

On Monday, RCMP in Iqaluit started wearing body cameras as part of a national pilot project to promote police accountability.

Since Jan. 1, there have been six serious encounters involving police in the territory, including two deaths.