'All my fans make me sick': Online video shows Ghomeshi singing about fans 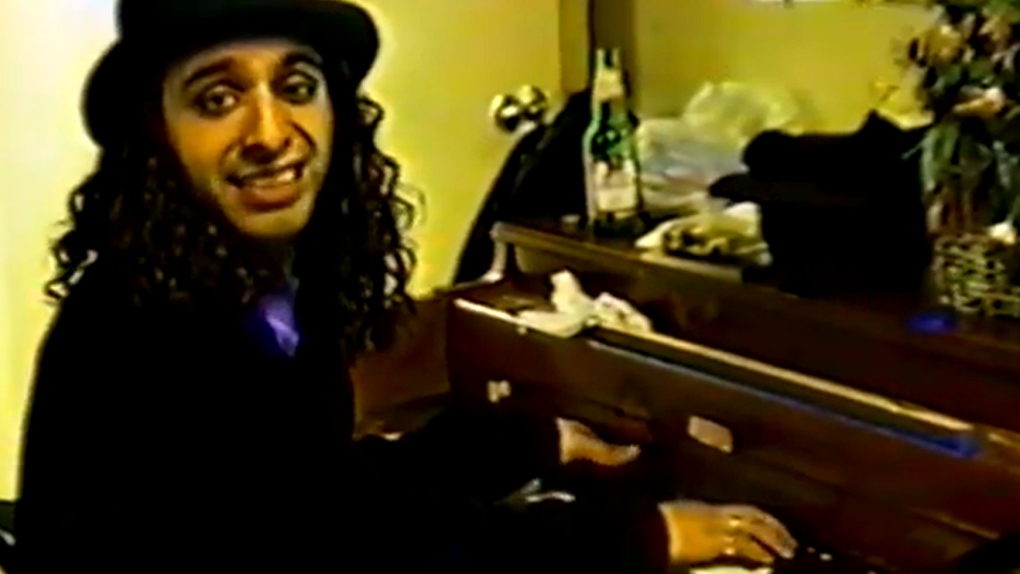 Image from a 1996 video posted on YouTube shows Jian Ghomeshi.

A video of Jian Ghomeshi singing a song after a 1996 concert, saying his fans make him "sick" and he'd like to beat them with a "big stick," has surfaced online.

In the video, which was posted over the weekend, a long-haired Ghomeshi is seen playing the piano as he sings and improvises the lyrics of a song after a 1996 Moxy Fruvous concert in Buffalo. In the video, Ghomeshi, who at the time was the lead singer of the satirical pop group, is often laughing and smiling.

"All my fans make me sick. All my fans are very thick. I'd love to beat them with a f**king big stick. This is my schtick," he sings, before he abandons the piano while laughing.

He then addresses the camera, stating that some of the fans in the Buffalo audience are "losers."

In the video, Ghomeshi then says that when he snubs fans, it makes him feel the same way he feels when “you accidentally step on a bug” and kill it, but don’t feel bad.

"I feel kind of that way when I snub some fans," he says. "I'm saying this with a smile, but I am serious."

Ghomeshi then returns to the video to start singing again, this time accompanied by another man.

During the video, people can be heard laughing in the background as Ghomeshi engages the camera.

While the video doesn’t make clear whether Ghomeshi is joking, the man who posted the video said in the description that while the song seemed “rather tongue in cheek, it was also a bit over the top.”

At the time, Yuhnke was working as a music director for the University of Buffalo's radio station and had arranged to get a video interview with the band. He said his friend tagged along with a camera and recorded the incident by accident.

He said that while the mood in the room at the time was light-hearted and he suspects Ghomeshi was joking, he still found the incident to be “a bit awkward.”

"I always felt a bit awkward about it," he told CTVNews.ca in a phone interview. "It seemed a bit heavy at the same time."

He added that while the understanding in the room was that the song was "sarcasm-laden," it was "hard to gauge entirely if he was being serious or not."

Yuhnke, who now works as a software engineer and resides in a Buffalo suburb, said he never ended up doing anything with the footage out of "respect" for Ghomeshi. But he decided to post it online after assault and sexual assault allegations were levelled against the former radio host.

Since the video was posted to YouTube on Saturday it has been viewed more than 56,000 times.

Meanwhile, Toronto police announced over the weekend that they are investigating allegations made against the former CBC radio host.

Insp. Joanna Beaven-Desjardins said three different women have come forward to speak with officers. Police are asking anyone who has any evidence related to the allegations -- including video, photos and social media chats -- to contact the Toronto Police Sex Crimes Unit.

The CBC said it fired Ghomeshi on Oct. 26, after it saw "for the first time, graphic evidence" that Ghomeshi had allegedly "caused physical injury to a woman."

Shortly after he was terminated, Ghomeshi posted a statement on Facebook saying that he has engaged in rough sex, but the acts were always consensual.

At least nine women have come forward to accuse him of abuse in media reports; many of the women remain anonymous while they tell their stories.

The allegations range from beating and choking to sexual harassment. None of the allegations against Ghomeshi have been proven in court.

The 47-year-old, who helped create the popular radio show "Q," has launched a $55-million lawsuit against the CBC, alleging breach of confidence, bad faith and defamation.