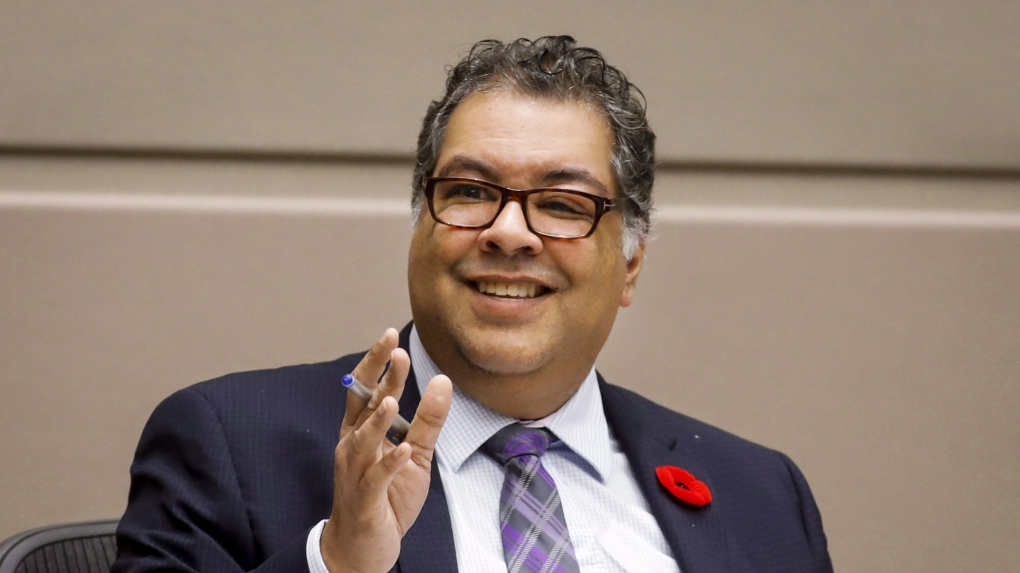 CALGARY -- Ideas that could give Alberta more independence from the federal government are getting a tepid reception from one of the province's big-city mayors and a chamber of commerce boss.

Premier Jason Kenney's United Conservative government has formed a panel to examine ways for Alberta to get what he calls a "fair deal" in Canada. They include establishing a provincial revenue agency, withdrawing from the Canada Pension Plan and replacing the RCMP with a provincial police force.

Any of those would have to be endorsed in a referendum.

"The way I work and the way we've operated the city is really to be as efficient as possible and to deliver services as efficiently as possible," Mayor Naheed Nenshi said Wednesday following a speech to the Calgary Chamber of Commerce ahead of his city council's upcoming budget talks.

"And when I look at the things that panel is looking at, I see increased costs."

He noted the creation of the panel comes after a tough provincial budget that ended inflation indexing on assured income payments to people with severe disabilities, increased the interest rate on student loans, scrapped a funding agreement with Edmonton and Calgary, and reduced support for some seniors.

"The benefits really had better be there ... We really have to make that justification I think."

Resentment and calls for separation have been roiling in Alberta since the Liberals were re-elected in last month's federal vote, but with a minority mandate. Kenney, who says he does not support full-on separatism, has lambasted the Liberals for policies he says have hurt the provincial oil and gas industry.

Sandip Lalli, CEO of the Calgary chamber, said the ideas the panel will weigh don't offer much to a city that faces a property tax crunch as businesses empty out of the downtown core.

"It's not adding greater certainty or clarity to what we're doing here in Alberta to be more competitive."

And she said she's not sure withdrawing from the CPP would be worthwhile.

"Is it better managed where it is and are the returns adequate where they are? Or is there a performance issue?" she asked.

In his speech, Nenshi sought to dispel what he called lies or myths about the city's finances -- that spending and property taxes are out of control, civil servants are overpaid and the UCP's inaugural budget last month did not hurt Calgary's bottom line.

He and Lalli expressed skepticism in the Kenney government's view that lowering corporate taxes to eight per cent from 12 per cent by 2022 would be enough to jump-start the economy. The UCP has done away with targeted tax incentives, brought in by the previous NDP government, to diversify revenue sources beyond oil and gas.

"It's not a point of pride that we are the lowest tax regime ... if it's not making us competitive to grow and reach more customers," Lalli said.

Nenshi said while companies may set up a branch office in Calgary, it's his experience that it's rare for them to move their entire headquarters -- so the tax drop is likely to make little difference.

The city's quality of life, availability of talent and affordable office space could still beckon new investment, he said.

"There's lots of tools there, but certainly we have fewer than we did six months ago."