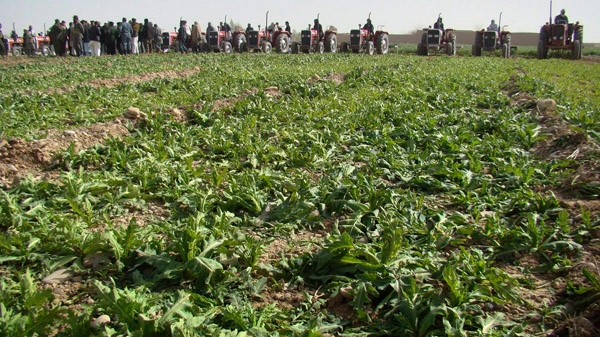 Tractors are seen next to an opium poppy field in Nad Ali district, Helmand province, south of Kabul, Afghanistan in this photo taken on Monday, Feb. 15, 2010. (AP / Abdul Khaleq)

CALGARY - Scientists at the University of Calgary announced Sunday they have unlocked one of the genetic secrets of the opium poppy -- a discovery that may open the door to cheaper and more readily available pain relief.

Biological sciences professor Peter Facchini said they have traced the unique genes that allow the opium poppy to make codeine and morphine.

"The enzymes encoded by these two genes have eluded plant biochemists for a half-century," said Facchini in an interview.

"In finding not only the enzymes but also the genes, we've made a major step forward. It's equivalent to finding a gene involved in cancer or other genetic disorders."

The 46-year-old Toronto-born scientist has been researching the opium poppy for close to two decades and, with the help of researcher Jillian Hagel, has been trying to specifically unlock the gene secrets for two years.

Hagel did much of the legwork, he said.

Using high-tech scanning equipment, she sorted through up to 23,000 different genes contained on one tiny slide.

More than a year ago, on Feb. 4, 2009, she ultimately located a gene called codeine /O/-dementhylase, which produces the plant enzyme that converts codeine into morphine.

"It was finding the needle in a haystack," said Facchini.

"It was one of her eureka moments. Science is like that. It's a lot of tedious work, then you have these seconds of sheer excitement because you know you've found something."

Since then, they have been busy checking and expanding on their work, which was published Sunday in the on-line edition of "Nature Chemical Biology."

Facchini has filed a patent on the technology. He says the applications could have an enormous impact on the business of painkillers in Canada.

Codeine is one of the most commonly used painkillers in the world. In Canada consumers spend more than $100 million a year on codeine-containing pharmaceutical products.

Canadians are among the world's top per capita consumers of the drug, but must have it imported from countries like France and Australia, said Facchini.

He said he's cautious on what the discovery means for consumers' bottom line.

"I'm always skeptical as to whether an industry finding a way of producing something cheaper is going to pass those savings on to the consumer."

He said the big change could be on the production side.

"Our discovery now makes it possible to use micro-organisms to produce opiate drugs and other important pharmaceuticals," he said.

One of the next steps for his team is using the codeine gene to create pharmaceuticals in yeast or bacteria.

"The applications might be more attractive in this additional work that we're doing," he said.

"An awful lot of our pharmaceuticals come from fermentation.

"You're probably going to shortly see yeast strains that have the ability to produce these compounds."

While codeine is currently extracted directly from the plant, most codeine is synthesized from the much more abundant morphine found in the opium poppy.

In humans, codeine is converted by an enzyme in the liver to morphine.