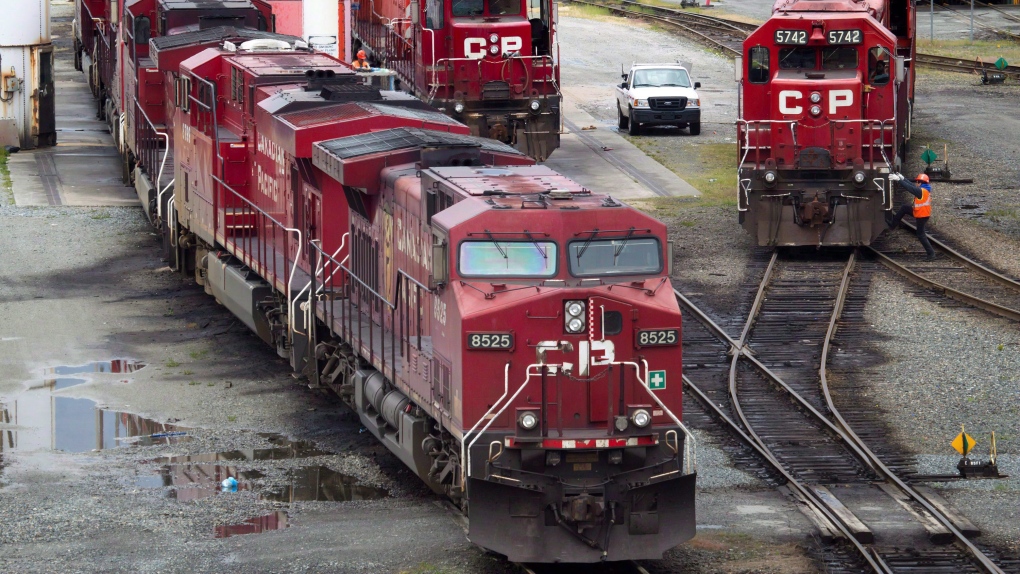 A Canadian Pacific Rail maintenance worker climbs onto a locomotive at the company's Port Coquitlam yard east of Vancouver, B.C., on Wednesday May 23, 2012. THE CANADIAN PRESS/Darryl Dyck

The head of Canadian Pacific referred to its rival's bid for U.S. railway Kansas City Southern "fantasyland" as a war of words between Canada's two largest railroads continued to heat up.

"It's not a real deal as far as I'm concerned. It's kind of fantasy land," he told analysts Wednesday in a conference call about its quarterly earnings results.

In a Thursday letter to the KCS board of directors, CN Rail CEO Jean-Jacques Ruest countered by accusing Canadian Pacific Railway of distracting investors with "inaccurate and unfounded assertions."

"CP's claims are not intended to benefit KCS shareholders, but to advance CP's own interests and to deprive KCS shareholders of the full value for their shares," he wrote.

Ruest said the Calgary-based rival has failed to acknowledge the "clear and substantial superiority" of CN's cash-and-share proposal for KCS shareholders. Its proposal is valued at US$325 per share that is US$50 per share higher than CP's which is valued at US$25 billion.

Creel said that while CN's offer was "eye-opening," it is unattainable because it can't win U.S. regulatory approval due to its negative impact on competition.

Creel said a CN-KCS merger would "destabilize" the rail network balance in North America that has prevented further consolidation of the six largest railroads for two decades, adding it would leave CP as a disadvantaged "odd-man-out" in a six-railroad North America.

CP has asked the U.S. Surface Transportation Board to rule that its combination with KCS qualifies under a waiver the regulator granted to KCS in 2001 from more stringent merger rules adopted to protect competition.

It said the STB should make it clear that CN's bid will not qualify for the same exemption. Opponents of CP's bid say the railway should also not receive the waiver.

"CN is confident that the Surface Transportation Board (STB) will not subject CN's proposal to any different standard or scrutiny in approving the voting trust than would be applicable to CP's proposal," Ruest wrote.

"Both voting trusts are equally likely to be approved. CP's deliberately misleading claims to the contrary are not correct."

Ruest added that following the closing of the voting trust, CN is confident that it will be able to address any "reasonable remediation concerns and ensure that rail customers and other stakeholders benefit from the proposed combination with KCS."

In response to an analyst's question, Creel said Wednesday that CP is not considering increasing its bid for KCS because it doesn't want to put its balance sheet at risk.

But Benoit Poirier of Desjardins Capital Markets said it would make sense for CP to do so, with an increase 11 per cent adjusted profits from the transaction, in line with CN.

"We maintain our view that CP will ultimately complete the transaction with KSU," he wrote in a report.

"Meanwhile, we agree with management that a CN-KSU combination would open the door for CP to consider a merger with another Class l railroad in the U.S. at some point.

Analyst Cameron Doerksen of National Bank Financial said CP has made a compelling argument that the CN-KSU combination is anticompetitive and that the STB may not approve the voting trust structure.

"Investors should look for shipper reaction to CN's proposal in the coming days as a potential gauge of the likelihood for STB to consider a CN-KSU combination," he wrote, adding that there's a good chance the CP deal wins under the current financial terms.

The U.S. regulator has received hundreds of letters of support for CP's bid made a month ago, but endorsements of CN's proposal have started to arrive.