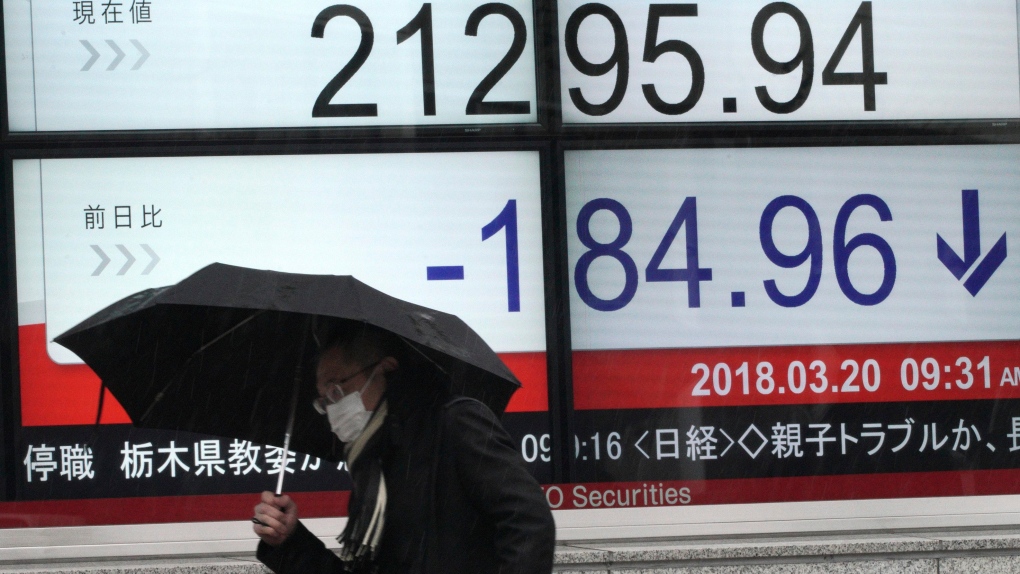 A man walks past an electronic stock board showing Japan's Nikkei 225 index at a securities firm in Tokyo Tuesday, March 20, 2018. (AP Photo/Eugene Hoshiko)

NEW YORK -- Stocks are drifting on Wall Street Thursday after a report showed the pace of layoffs across the country is slowing, though it remains incredibly high.

The S&P 500 was holding steady in midday trading after flipping between an earlier gain of 0.2% and a loss of 0.3%. It's cooling off following a four-day winning streak that had brought it back within 2% of its record high for the first time since February.

Treasury yields and gold were making more notable moves, as investors burrowed into safer ground. Stock markets elsewhere around the world were mixed.

The day's headline economic report showed that nearly 1.2 million workers applied for unemployment benefits last week. It would have been an astounding number before the coronavirus pandemic levelled the economy. But it's a slowdown from the prior week's slightly more than 1.4 million, and it was also not as bad as economists were expecting.

The easing in claims was the first after two weeks of increases, and economists called it an encouraging step. But the threat of more business closures due to the continuing pandemic means the path remains treacherous.

Investors have been pushing stocks higher despite such worries, in part on expectations that Washington will soon agree on more aid for the economy. Negotiators from Congress and the White House are continuing to try to strike a deal that would offer assistance to those out-of-work Americans after $600 weekly in jobless benefits just expired, along with other measures.

Investors say it's crucial that the aid comes and quickly. The economy has shown signs of improvement since the spring, but it's still hobbling, and worries are high that it may backtrack amid a resurgence in coronavirus counts.

A souring tone from both sides during Wednesday's talks indicates that a long slog remains. The White House's chief of staff threatened that President Donald Trump is looking at using his executive authority to make moves on his own.

Slightly more stocks were falling in the S&P 500 than rising, with the health care sector the heaviest weight on the index. Becton Dickinson sank 9.3% after it gave a forecast for earnings this fiscal year that fell short of analysts' expectations.

Western Digital, which makes hard disks and other storage for electronics, slumped 16.6% for the largest loss in the S&P 500 after it gave a profit forecast for the current quarter that wasn't as strong as Wall Street's.

More gains for Apple helped to balance the market. The iPhone maker reported blowout profits recently as it continues to grow through the pandemic, and it may become the country's first company to top $2 trillion in total value. After rising 1.3%, it's at nearly $1.9 trillion.

Sealed Air, the company behind Bubble Wrap and Cryovac packaging, jumped 9.1% for the biggest gain in the S&P 500 after it reported stronger earnings for the latest quarter than analysts forecast. It also gave a better-than-expected forecast for earnings this year.

The yield on the 10-year Treasury fell to 0.50% from 0.54% late Wednesday. It's remained very low amid worries about the economy and as the Federal Reserve has pinned short-term rates at record lows.

Some analysts have been concerned about the wide disconnect between the bond market, which is still showing so much caution, and the stock market, which has rallied back toward record heights. Even though the stock market is not the economy -- it's increasingly dominated by a handful of Big Tech companies that can profit even during a pandemic, and profit is what drives stock prices in the long run -- critics say the degree of the gap between them is concerning.