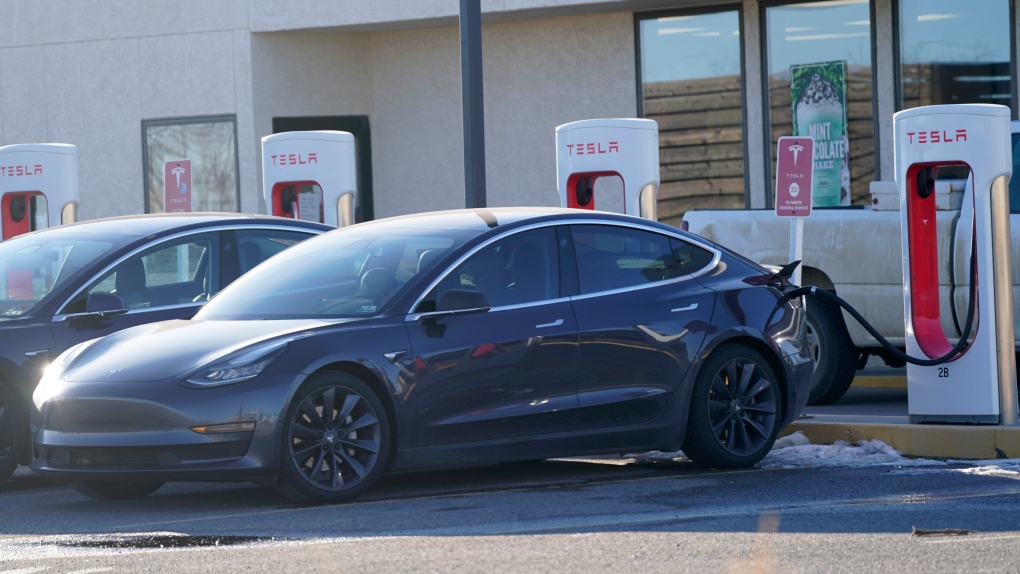 Motorists charge their vehicles at a Tesla supercharging location next to a fast-food restaurant off Interstate 70 Wednesday, Dec. 30, 2020, in Limon, Colo. (AP Photo/David Zalubowski)

DETROIT -- Tesla Inc. is balking at recalling about 159,000 vehicles with potentially defective touch screens, so U.S. safety regulators are moving to force the company to take action.

The National Highway Traffic Safety Administration on Wednesday sent a letter to Tesla saying it has tentatively determined that the screens are defective and pose a safety risk because they can cause backup cameras to go dark and defrosters to malfunction.

The agency wouldn't comment beyond the letter, which is a rare step toward a public hearing and eventual legal action. Experts say the letter means that Tesla has resisted doing a recall that NHTSA feels is necessary.

"It's obvious to me that Tesla told NHTSA to go pound sand, so what they're about to get, they've earned it," said Frank Borris, a former head of the agency's Office of Defects Investigation who now runs a safety consulting business.

Messages were left Wednesday seeking comment from Tesla, which is based in Palo Alto, California.

Last June, the agency opened an investigation into complaints that the giant touch screens would go dark in certain 2012 through 2018 Model S cars and 2016 through 2018 Model X Tesla vehicles. It upgraded the probe to an engineering analysis in November.

The letter says the agency has determined that the screens are defective because their computer processors have a finite number of program-and-erase cycles. NHTSA says the screens would fail in five to six years, which isn't sufficient for safety-critical features.

"The lack of a functioning windshield defogging and defrosting system may decrease the driver's visibility in inclement weather, increasing the risk of a crash," the letter said.

In data submitted by Tesla, the agency found more than 12,000 customer complaints, field reports, warranty claims and other claims related to the screens, the letter said.

NHTSA also determined that the failure rate for the screens is higher than the rate for vehicles involved in prior recalls for similar problems.

Tesla tried to fix the problem with several over-the-air software updates, but NHTSA said it tentatively believes the fixes are insufficient.

"I think it's planned obsolescence, which requires physical replacement of a part which Tesla tried to gloss over by sending a software update," said Jason Levine, executive director of the non-profit Center for Auto Safety.

The screen failures also can cause the loss of audible chimes and alerts that are part of Tesla's "Autopilot" driver-assist system.

The letter says that if Tesla formally decides not to do a recall, it has to provide NHTSA with an explanation. The agency can schedule a public meeting on matter and could turn it over to the Justice Department for legal action, Borris said.

Borris, who reviewed the letter, called it very thorough and said NHTSA has a strong case should Tesla decide to challenge the agency in court.