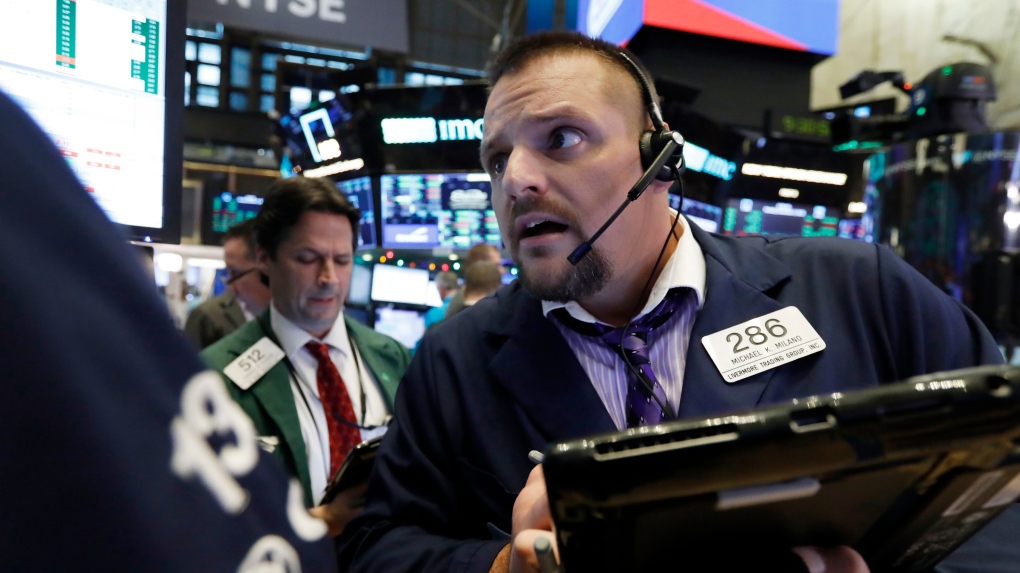 U.S. stocks fell sharply Friday, erasing an early gain, as the market closed in on its third weekly decline in four weeks.

The latest wave of selling sent the Dow Jones Industrial Average down more than 500 points. The blue chip average is now down more than 1,000 points this week.

Losses in technology and health care stocks accounted for much of the market's slide. Retailers and other consumer-focused companies, banks and industrial stocks also took heavy losses.

Utilities, which investors favour when they're fearful, eked out a slight gain. Crude oil prices rose on news that OPEC members agreed to cut production next year.

The S&P 500 and Dow are now in the red for the year. The Nasdaq was holding on to a modest gain.

"We're in a market where investors just want to sell any upside that they see," said Lindsey Bell, investment strategist at CFRA. "The volatility we've seen the last couple of weeks has been pretty extreme in both directions."

The benchmark S&P 500 was on track to cap a turbulent week of trading with its third weekly drop in four weeks. That would represent a big swing from just last week, when the index had its best weekly gain in nearly seven years.

Volatility has gripped the market since early October, reflecting investors' worries that the Federal Reserve might overshoot with its campaign of rate increases and put the brakes on the U.S. economy.

Traders also fear that a prolonged trade dispute between the U.S. and China could slow the global economy and crimp corporate profits. Uncertainty over both those issues helped drive the market's sell-off this week.

"The Fed has taken the punch bowl away in getting back to rates where they are today," said Doug Cote, chief market strategist for Voya Investment Management. "We're also going to get back to more normal volatility."

The pickup in oil prices sent some energy stocks higher. EOG Resources gained 2.7 per cent to $104.87.

A sell-off in technology stocks weighed on the market. Hewlett Packard Enterprise slumped 7.7 per cent to $14.78.

Health care sector stocks, the biggest gainer in the S&P 500 this year, took some of the heaviest losses. Medical device company Cooper lost 10.8 per cent to $247.10

Tobacco company Altria Group, which makes Marlboro cigarettes, announced a $2.4 billion investment in Cronos Group, a Canadian medical and recreational marijuana company. Altria' shares got a boost from the announcement, but the gain faded by late afternoon. The stock fell 0.2 per cent to $54.28.

The Labor Department said U.S. employers added 155,000 jobs in November, a slowdown from recent months but enough to suggest that the economy is expanding at a solid pace despite sharp gyrations in the stock market. The unemployment rate remained at 3.7 per cent, nearly a five-decade low, for the third straight month. Average hourly pay rose 3.1% from a year ago, matching the previous month's figure, which was the best since 2009. The jobs figure was less than many economists forecast, but few saw the report as a sign of a broader slowdown.

Bond prices rose, sending yields slightly lower. The yield on the 10-year Treasury fell to 2.86 per cent from 2.87 per cent late Thursday.

The decline in bond yields, which affect interest rates on mortgages and other consumer loans, weighed on banks, which make more money when rates are rising. Morgan Stanley slid 3.2 per cent to $41.26.