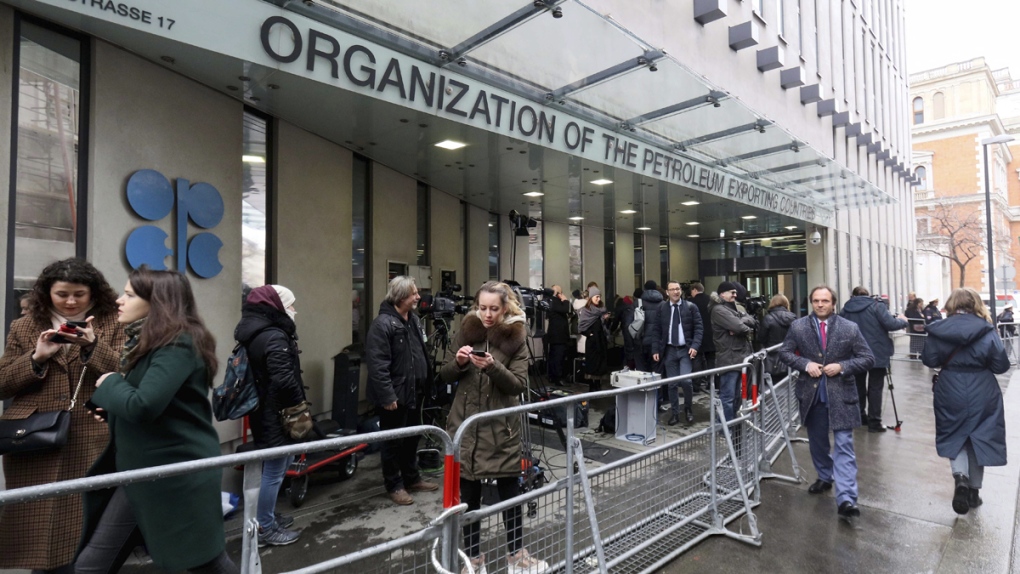 People stand in front of the headquarters of the Organization of the Petroleum Exporting Countries, OPEC, in Vienna, Austria, on March 6, 2020. (Ronald Zak / AP)

VIENNA -- OPEC and key ally Russia failed to agree Friday on a cut to oil production that would have contained the plunge in the price of crude caused by the new coronavirus outbreak's massive disruption to world business.

The price of oil fell sharply in international markets as a result, with the international benchmark down 8%, down by a third since the start of the year.

While cheaper oil will translate into more affordable energy for consumers and businesses, it hurts producing countries and companies, Thousands of workers have already laid off in the U.S. oil patch.

The unraveling of the talks in Vienna also underscores the limited power of the cartel to influence world energy markets, unlike its heyday in the 1970s. The United States recently became the world's biggest oil producer and keeps on pumping at full capacity.

The 14 OPEC countries had wanted to cut output by 1.5 million barrels a day, or about 1.5% of world production. OPEC countries like Saudi Arabia and Iran say they need non-member allies like Russia to take 500,000 barrels of that cut on themselves.

Russia, however, proved reluctant and OPEC Secretary General Mohammed Barkindo of Nigeria said Friday that the meeting had been adjourned.

"At the end of the day, there was the general painful decision of the joint conference to adjourn the meeting," Barkindo said. He said informal talks would continue because the situation was urgent.

"The numbers are clear: the demand destruction is real," he said.

Barkindo said "one or two" non-OPEC countries at the talks Friday had been reluctant to agree to the proposed cuts.

Russia and other non-OPEC countries have been working with the cartel in recent years and agreed on earlier cuts. However, Russia can tolerate low oil prices better than Saudi Arabia can and appears reluctant to slash output of its main revenue-making export.

Saudi Arabia needs $83.60 per barrel to balance its state budget, according to the International Monetary Fund. Russia needs only $42.40 for its own kind of crude oil.

Analysts say OPEC may struggle to keep oil prices from falling further, particularly as the full impact of the virus outbreak on the global economy has yet to be understood.

"There is still too much uncertainty regarding the amount of demand destruction," analysts at research firm Petromatrix said in a note to investors.

The spread of the coronavirus has sharply reduced air travel and thus the demand for fuel, while industry in China, the world's second largest economy, has been severely disrupted through shutdowns and travel restrictions. German airline Lufthansa said Friday it and its subsidiaries will reduce their capacity over the coming weeks to as little as 50% of the level before the coronavirus crisis started.

Some economists think the global economy may shrink in the first quarter for the first time since the financial crisis, sapping demand for energy.

The international benchmark for crude oil fell about 8% to $46 a barrel on Friday. It had been trading over $50 in recent days, and is down from $69 as recently as early January, before the outbreak.

With oil under $50 a barrel, U.S. producers, including oil giants such as Exxon, are scaling back drilling as their profits get hit. The oil patch has already been shedding thousands of jobs and suffering through a surge of bankruptcies, and lower prices will exacerbate those problems.

Barkindo said OPEC was determined to avoid a repeat of the big market slump that began in 2014, when the cartel held off production cuts in order to not lose market share to a resurgent U.S. oil industry. That led to a fall in the price of oil from over $100 a barrel to below $40 by 2015.

Even if OPEC and its allies agree on a production cut in the coming days or weeks, analysts say prices are unlikely to rise much. That's because the global economy is slowing rapidly. But also because the the U.S., which is not part of OPEC and unlike Russia does not co-operate in its output decisions, has ramped up in recent years, flooding the market and keeping prices down.