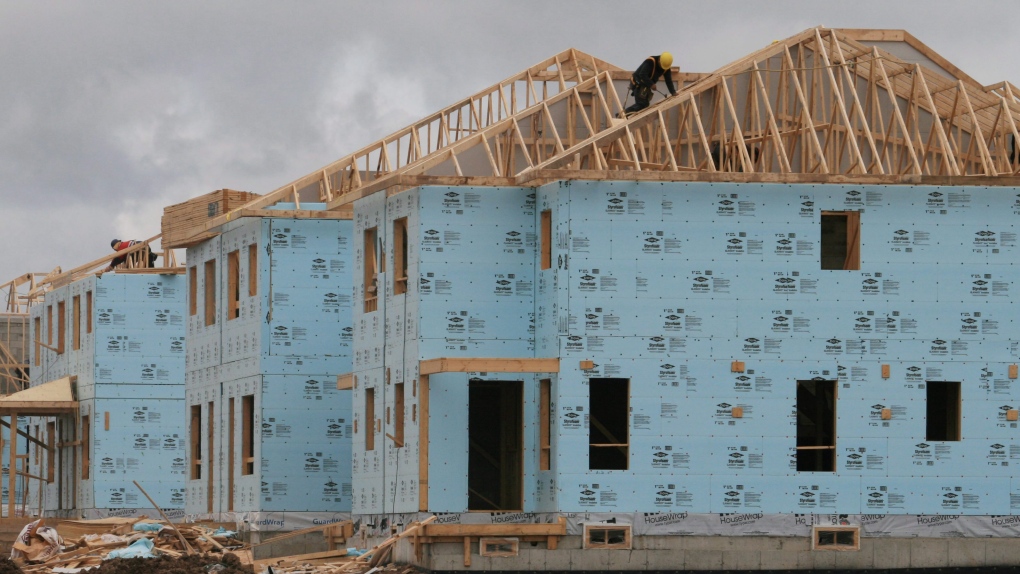 A construction worker works on a house in a new housing development in this file photo. (Richard Buchan / THE CANADIAN PRESS)

OTTAWA -- The national housing strategy will need new tools to move more quickly from ideas to finished projects during the COVID-19 pandemic, says the head of the federal housing agency.

The Canada Housing and Mortgage Corp. is a key overseer of the decade-long national housing strategy, which includes tens of billions in federal and provincial funding and financing.

It has been criticized for the slow turnaround time on some of its national housing strategy programs, including by smaller housing providers who have complained about the reams of paperwork needed to access them.

Some of that is unavoidable, said CMHC president Evan Siddall, as lending federal money through the programs requires diligence.

The federal government requires the agency to assess a project on factors like affordability, impact on greenhouse gas emissions, and accessibility, he said, and there is also a requirement to consult with provinces and territories.

Siddall said the agency has cut turnaround times by one-third, and suggested that new tools could drive down that time further as the country looks to grow the supply of affordable housing.

"We in government, what we do is we take these grand problems and we constrain them and in constraining them we actually slow things down, so we've got to find ways to speed them up," Siddall said in a recent interview with The Canadian Press.

More help from the private sector is also needed, he said.

"We don't have enough money as governments to deal with all this," Siddall said.

And there is another element that is harder to define.

One example: The agency is looking at apps to help connect people who do not have adequate housing, with people who have space available.

There could also be some new ideas coming from the top this week, as the Liberals are expected to include affordable housing in the throne speech when Parliament returns Wednesday.

Among the possibilities is a rapid-housing program that would allow cities and housing providers to purchase distressed assets like hotels and motels where an owner is forced to sell for pandemic-related reasons.

The CMHC has been looking at how that program could work, but Siddall would say only that it is the government's decision to make.

Meanwhile, the COVID-19 pandemic has made housing affordability, which the federal agency had already made a priority, an even bigger issue.

CMHC estimates about $1 billion worth of mortgage payments were deferred each month during the pandemic, and fewer people will get ahead on their payments this year than in 2019.

The federal agency is striving to ensure everyone in Canada has a home they can afford and that meets their needs by 2030.

"It's all about making sure people understand that housing affordability should be what we all care about. It's good for our country. It's good for an economy," Siddall said.

He brushed off criticism that CMHC has a bias against home ownership, but he said there needs to be a limit to how far the agency will go to help people get into the market.

"People who want to ease credit standards and push debt higher in order to buy houses are only lining their own pockets because they're not helping the people they're purporting to help," he said.

This report by The Canadian Press was first published Sept. 20, 2020.