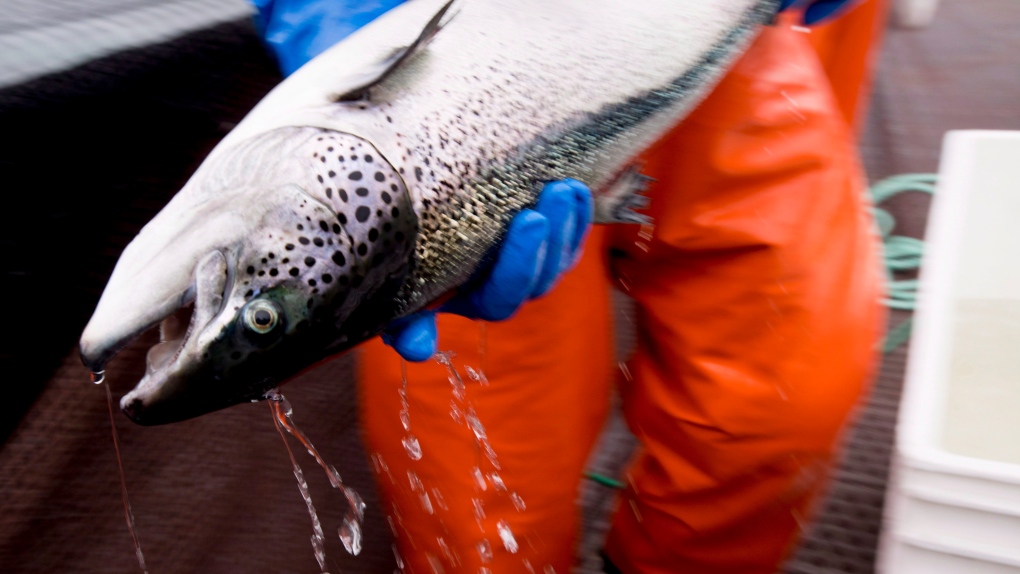 An Atlantic salmon is seen during a Department of Fisheries and Oceans fish health audit at the Okisollo fish farm near Campbell River, B.C. Wednesday, Oct. 31, 2018. THE CANADIAN PRESS /Jonathan Hayward

HALIFAX -- A subsidiary of Japan's giant Mitsubishi Corporation has unveiled an ambitious proposal to build salmon farms in Nova Scotia.

The provincial government has granted Cermaq Canada four options to lease sites in the Chedabucto Bay region along the eastern shore, and in the St. Mary's region south of Digby.

A Cermaq website says the company hopes to obtain about 20 salmon farm licences, with two hatcheries and a processing plant.

It says more than 300 jobs could be created, and suggests the farms would contribute $500 million to the local economy.

David Kiemele, managing director of Cermaq Canada, says the company will need the support of the Mi'kmaq to proceed.

"We are coming to listen, to learn and to ask questions," he said in a statement. "As excited as we are, we know that we need to have community, stakeholder and Mi'kmaq support to proceed, and we look forward to those discussions."

Keith Colwell, the provincial minister of fisheries and aquaculture, said Wednesday the company hopes to net 20,000 tonnes of salmon a year.

He said Cermaq's spending on the project would be substantial: "This investment is, I'm guessing, it's a guesstimate, around $400- to $500-million."

The company expects the project would create up to 1,200 indirect jobs, he said.

"They're very oriented toward communities, to people, the environment, all those things we'd be looking for in a company."

"We are coming to Nova Scotia with open minds, hearts and ears; looking for guidance, local knowledge and history. We admit that we don't know what we don't know as the saying goes," she said in a statement.

"We want to learn about what communities value, what is important to each unique region, and develop an idea of how Cermaq could potentially fit into that picture. We also want to share some of the good things we have to offer."

Cermaq says it has about 4,500 employees, with farms off Vancouver Island as well as in northern Norway and Chile.

Colwell said Nova Scotia has the strongest fish farm regulations in the world, and that aquaculture firms are drawn to the province because of its "pristine" waters.

"There's a huge market in the world for protein. And as we can't catch any more wild fish, and its going to be to the point that we're going to have a lot more aquaculture in the world," he said.