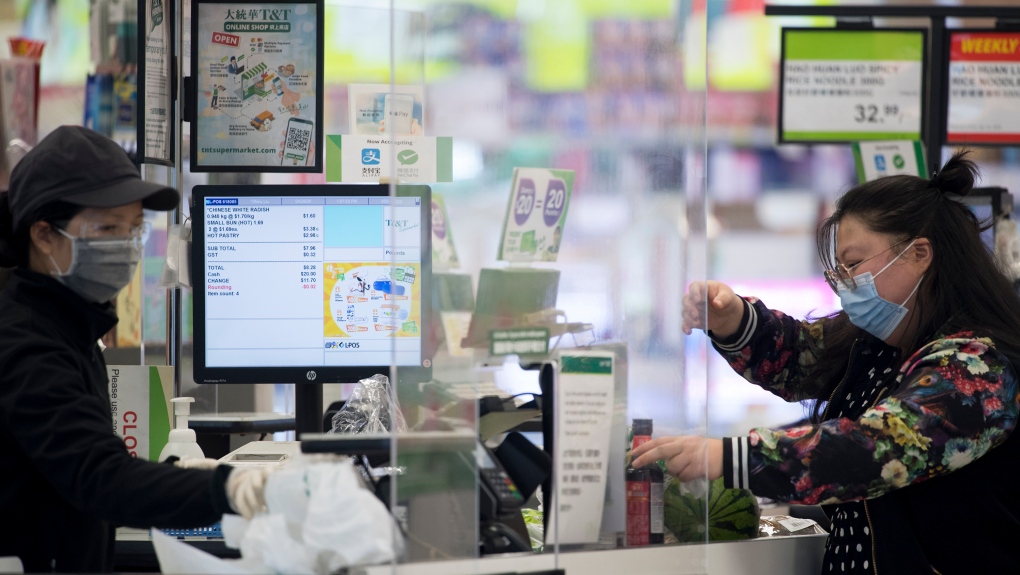 A grocery store worker wears a protective face mask and gloves as a customer stands on the other side of the plexiglass divider in downtown Vancouver Wednesday, April 29, 2020. THE CANADIAN PRESS/Jonathan Hayward

TORONTO -- Loblaw Companies Ltd., Metro Inc. and Empire Co. Ltd. made their decision to end “pandemic pay” independently of each other, even as the decision was based in part on being aware of what some of their competitors were planning, the chief executives for the companies told the members of Parliament on Friday.

Executives for Canada’s three main grocery chains defended their decision to halt their temporary $2-an-hour wage increase last month, telling a House of Commons committee that there was no “collusion” and that the decision was based on employee workload, the economy re-opening, other retailers opening again, a return to more “normal” business conditions, and lower business volumes.

Lawmakers grilled the executives, questioning the “courtesy” calls and emails that were made and sent between them. This included an email Loblaw president Sarah Davis sent on June 11 to Metro, Empire, and others including Walmart, letting them know the company was planning to end its temporary pay hikes two days later. Metro decided to end theirs on the same day.

Davis had sent a similar email earlier when Loblaw, which owns No Frills, T&T and Valu-Mart as well, decided to initiate a wage increase for its workers.

Eric LaFleche, chief executive at Metro, which operates 950 food stores including Food Basic and Super C, said he did not send emails to any colleagues or competitors regarding the decision to end the temporary wage hike, but he had previously spoken to Davis and Empire CEO Michael Medline on the phone, in compliance with the Competition Act, to ask about their intentions with respect to the temporary bonuses. Both said at the time they were undecided. Medline added that a lawyer was present during his call with LaFleche and that he had declined to discuss the issue further.

“I don’t accept your premise that this was co-ordination, collusion or anything untowards. Everything was above board, within legal boundaries, I can say that wholeheartedly. I have no issue with what we did and what information we got and how we got it,” said LaFleche, who said the calls were to help inform his decisions for the company and its employees, and not any kind of tacit agreement on staff pay.

LaFleche’s comments echoed Medline’s, who said in his opening statement to the committee that he wanted to be “absolutely clear” they did not co-ordinate their decisions. Medline told committee members that the company’s decision to stop the pay premium came before he received Davis’s email, though he did hear Loblaw was considering it. Empire operates Sobeys and Safeway among other banners.

The executives told lawmakers that they also consulted with corporate counsel to ensure that no laws were being violated.

In a series of tense exchanges during the two-hour session, committee members questioned the executives’ decision to halt the pay premium, particularly as dozens of retail and warehouse workers continued to be sick with COVID-19, and a new report that another two grocery store workers tested positive in southern Ontario.

Earlier this week, union leaders representing thousands of grocery employees, told the same committee that the pandemic was not over, and therefore the temporary premiums should also continue.

During questioning, Medline indicated that going forward, if a region were to go into lockdown again, they would offer “hero pay” again, and that he would look into retroactive compensation as well.

In Friday’s meeting, executives -- criticized for their own salary compensations and dividend payouts to shareholders -- said decisions like the installation of plexi-glass barriers in stores were made without consideration to costs and that tens of millions of dollars had been invested to ensure the safety of their store workers during the pandemic.