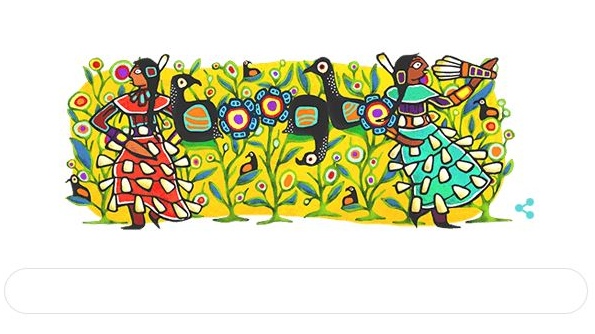 The illustration depicts two women dancing in jingle dresses, which the search engine describes as filling the air with sounds like raindrops on a tin roof as metal ornaments jingle with dancers' intricate footwork.

Pawis-Steckley says he hopes it carries the message that Anishinaabe culture is beautiful and Indigenous women are strong.

He was excited when Google approached him in April with the idea of creating a so-called Google Doodle about the dance, which is popular at competitive powwows in Canada and the United States.

Pawis-Steckley splits his time between Vancouver and Wasauksing First Nation in Ontario and says he's not sure how Google found his work, but suspects designers might have noticed a series of different powwow dance illustrations he created last year.

He says he's received a flurry of messages and nearly doubled his Instagram followers since the doodle went live at midnight on Saturday.