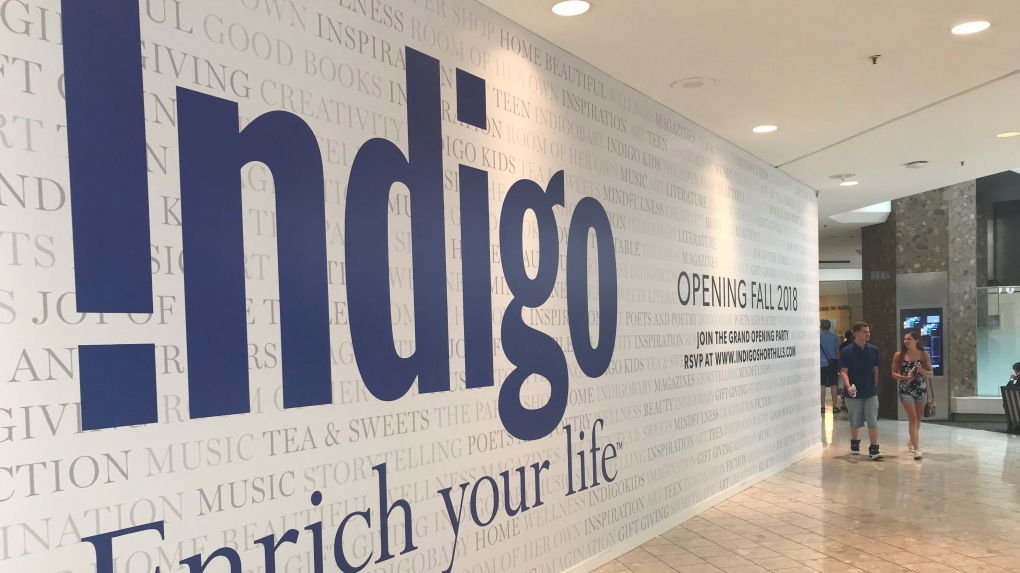 A sign showing where Indigo plans to open a new store this fall is seen at the Mall at Short Hills in Short Hills, N.J., on July 22, 2018. (THE CANADIAN PRESS/Craig Wong)

"I think our own view is that customers will continue well, well into the months ahead to make shopping an activity they do when they have something specific to buy," Heather Reisman said during a conference call with analysts. The company released its first-quarter financial results after markets closed Thursday.

Foot traffic is "still way down" for the book retailer, which shuttered all its stores to help stop the spread of the coronavirus and only reopened nearly all 182 of its locations by the end of its most recent quarter.

Since reopening, retail store sales have tracked at about 72 per cent of sales at the same time last year, said chief financial officer Craig Loudon.

However conversion and average transaction size are both "way up," noted Reisman.

"So, that's saying that you've got a deliberate customer and we think that that's going to remain, frankly, until there's a vaccine."

In Canada, people watch the news and are afraid of the virus, she said.

"So, all in all, we predict that the retail consumer will remain a cautious consumer," she said.

The company is working to make the shopping experience easy and safe and is planning for the important holiday shopping season although it remains to be seen how consumers behave during a usually busy period.

The company accelerated efforts during the first quarter to help serve customers safely during the holiday season, including "a robust click-and-collect capability and Instacart service," said Reisman. These efforts should be implemented in the current quarter.

The company's e-commerce revenue grew threefold, jumping up 214 per cent for the quarter compared with last year. That demand "has moderated, but remained strong" as stores reopened, said Loudon.

Indigo's shares, which have plunged from a high of $8.06 last August, surged 19 per cent or 20 cents at $1.25 in afternoon trading on the Toronto Stock Exchange.