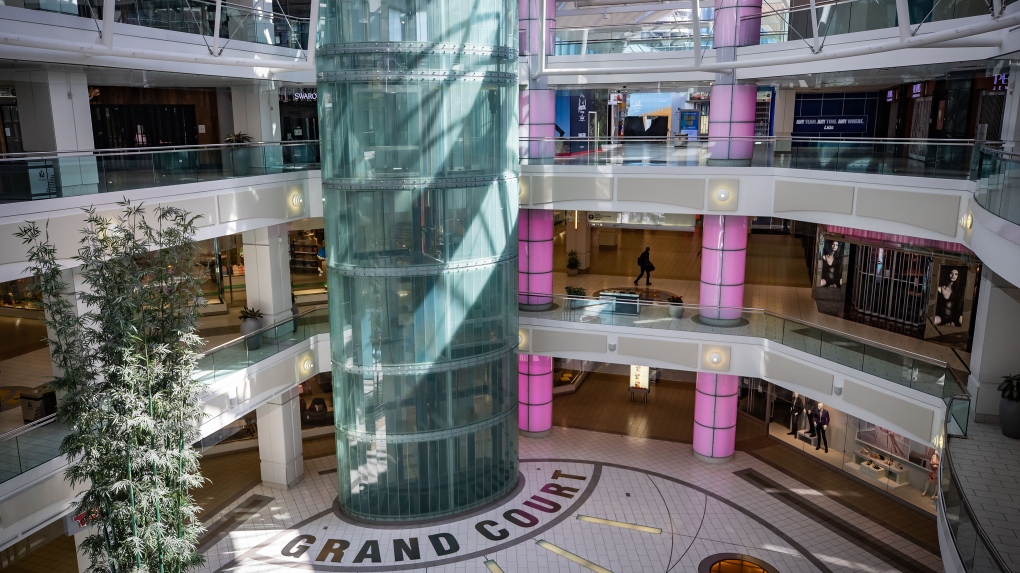 A person is silhouetted while walking through a deserted Metropolis at Metrotown shopping mall, where only a few stores remain open due to COVID-19, in Burnaby, B.C., on Sunday, April 12, 2020. Swimco, which announced it was closing its stores, had a location at the Metropolis. THE CANADIAN PRESS/Darryl Dyck

TORONTO -- Swimwear retailer Swimco is closing its door after 45 years, the family-owned, Calgary-based company announced on its website recently, marking the latest Canadian company to fall victim in what has been an extremely difficult year for retailers.

“It’s time we say, sea you later. After 45 years in business, Swimco must close its doors,” Swimco’s website said.

The closure, which was first reported by Retail-Insider.com, was effective Oct. 10, with all stores shuttering their doors. Its online store will remain open, but all sales are final and no returns or gift cards will be accepted.

Swimco Aquatics Supplies Ltd. and Swimco Partnership filed a notice of intention (NOI) in June in a restructuring effort, but in a notice on its website, the company was “unable to make a viable proposal within any court granted extensions and is thereupon deemed to have made an assignment into bankruptcy effective October 10, 2020.”

Deloitte Restructuring Inc. was appointed as trustee to handle the bankruptcy.

The company operated 19 stores in total, eight in British Columbia, seven in Alberta, two in Manitoba, and one each in Saskatchewan and Ontario. Prior to the pandemic-related closures in March, Swimco had 25 locations in Ontario and Western Canada, according to a court filing.

The company had been operating “in the ordinary course” prior to the March closures, according to an affidavit filed in June by chief executive Lori Bacon. During the closures, the only source of revenue was from its online sales, but it was insufficient to pay its leases or long-term debt. Despite reopening its stores in May, sales never recovered pre-pandemic levels, the filing statement said.

According to its website, the inspiration for the store took seed in 1968 when Bacon joined her school swim team but could not find a swimsuit that fit. Her mother Corinne launched a mail-order business in 1970 from her basement in response to her daughter’s dilemma. It made its corporate debut as Swimco five years later. The first bricks and mortar store opened in 1982 and expanded from there over the following two decades.

According to a court filing from June, the company owed more than $4.7 million to creditors at the time, including RBC and shopping centre landlords.

Even before the pandemic hit, the North American retail industry had already been in a years-long upheaval as companies struggled for survival in a dramatically changing digital environment and highly competitive retail landscape.

COVID-19 was a death-blow to many stores, accelerating and exacerbating existing challenges, with many stores forced to close in March as part of the pandemic containment measures. More than two dozen retailers have since announced permanent store closures -- including Things Engraved, Carlton Cards, Pier 1, David’s Tea, and Mendocino -- with countless more filing for creditor protection.