Bill Clinton in favour of Keystone; wife to decide its fate 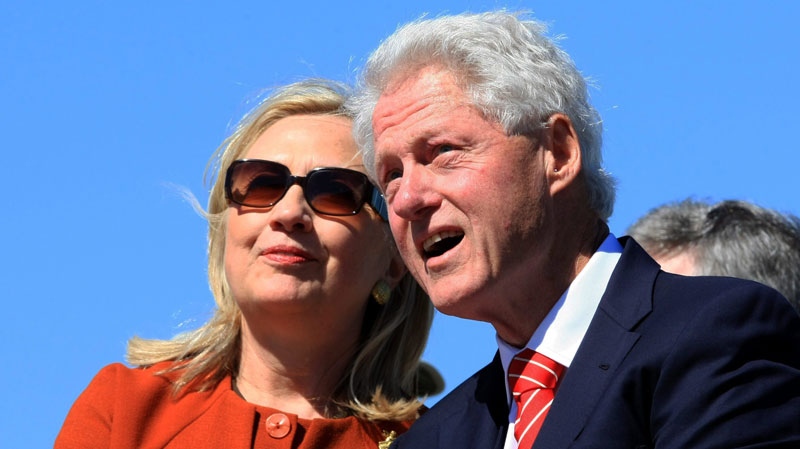 WASHINGTON - Former U.S. president Bill Clinton has thrown his support behind TransCanada's Keystone XL pipeline, the controversial project whose ultimate fate is in the hands of his wife.

Clinton, the keynote speaker at the Department of Energy's conference for clean-technology startup companies, wondered aloud on Wednesday why TransCanada didn't originally propose to build the pipeline around the environmentally sensitive Ogallala aquifer in Nebraska.

"One of the most amazing things to me about this Keystone pipeline deal is that they ever filed that route in the first place, since they could have gone around the Nebraska Sand Hills and avoided most of the dangers, no matter how imagined, to the Ogallala with a different route," he said at the event in Maryland.

"The extra cost of (rerouting the pipeline) is infinitesimal compared to the revenue that will be generated over a long period of time," he added.

"So, I think we should embrace it and develop a stakeholder-driven system of high standards for doing the work."

Secretary of State Hillary Clinton, testifying later in the day to the House of Representatives' Foreign Affairs Committee hearing, was asked about her husband's remarks.

"He's a very smart man," she said to laughter.

"But he, unfortunately, is not bound by the laws and regulations any longer of the United States to make decisions that follow a certain procedure. And that's what we have to do."

Bill Clinton's comments will almost certainly cause a stir given his wife has already been accused of a pro-pipeline bias by the sea of American environmentalists who oppose Keystone XL. The State Department is deciding the fate of the $7.6 billion pipeline since it crosses an international border.

"Obviously we disagree with his support of the pipeline," said Susan Casey Lefkowitz of the Natural Resources Defense Council. "It's never good to have the spouse of the secretary of state commenting on something where she may be the decision-maker."

Lefkowitz pointed out, however, that Clinton also made reference to America's "continued addiction" to oil in his remarks, saying it stifles innovation and keeps the U.S. tethered to the past.

"And that's exactly why we're so opposed to this project and dirty oil in particular," she said.

In November, the Obama administration deferred making a decision on the pipeline until after this year's presidential election, citing concerns about the risks that Keystone XL's proposed route could pose to the Sand Hills region of Nebraska.

Pipeline proponents cried foul, saying it was a cynical political move aimed at pacifying the environmentalists among President Barack Obama's base in advance of the election.

In January, facing a mid-February deadline imposed by congressional Republicans, the Obama administration rejected TransCanada's permit outright, saying it didn't have enough time to thoroughly review a new route before giving it the green light.

But Obama also assured Prime Minister Stephen Harper that the decision was not based on the pipeline's merits, but was merely necessitated by Republican pressure tactics.

Hillary Clinton said Wednesday that TransCanada will submit a new application for a route that would carry Alberta oilsands bitumen from the Canadian border to Steel City, Nebraska.

"At the same time," she said, "they're moving forward with parts of the pipeline like from Oklahoma to Texas, that don't cross the border and don't need State Department evaluation or decision."

The Calgary-based company has also said it's reapplying soon for a presidential permit that incorporates the alternate route around the Nebraska aquifer.

Republicans have not eased up on their attempts to force approval of the pipeline. Earlier this month, the Republican-controlled House of Representatives passed legislation that would strong-arm the Obama administration into green-lighting Keystone XL as soon as possible.

They believe the pipeline will create thousands of jobs and help end U.S. dependency on oil from often hostile OPEC regimes.

The pipeline was a topic of discussion at a lunch meeting Wednesday at the White House between Obama and John Boehner, Republican speaker of the House of Representatives.

"I did press the president on the Keystone pipeline," Boehner told a news conference.

"The president said: 'Well, you're gonna get part.' I just wish we were getting the part that actually delivers the oil out of Canada."

"Calls to approve Keystone XL right away, again, are insulting to the American people because there is no permit to approve," he said.

The pipeline has become a rallying cry for Republican presidential candidates as well. After narrowly winning the Michigan primary on Tuesday, Mitt Romney vowed to keep fighting for Keystone XL.

"I'll get us that oil from Canada that we deserve," he said to cheers in Columbus, OH.

The Obama administration, meantime, signalled a shift in attitude toward Keystone XL earlier this week when the president praised TransCanada's decision to proceed with constructing the pipeline from Cushing, Oklahoma to Port Arthur, Texas.

Hillary Clinton denied the administration was shifting gears in her testimony on Wednesday.

"So why the flip-flop on the Keystone XL pipeline?" Florida congressman Connie Mack asked Clinton.

"I don't think there was any flip-flop, Congressman," she replied.

"I think that this was always a matter that had to be evaluated in accordance with legal and regulatory standards. Certainly energy security considerations were a key factor, but not the only factor. There was a lot of concern on the part of one state through which the pipeline travelled."