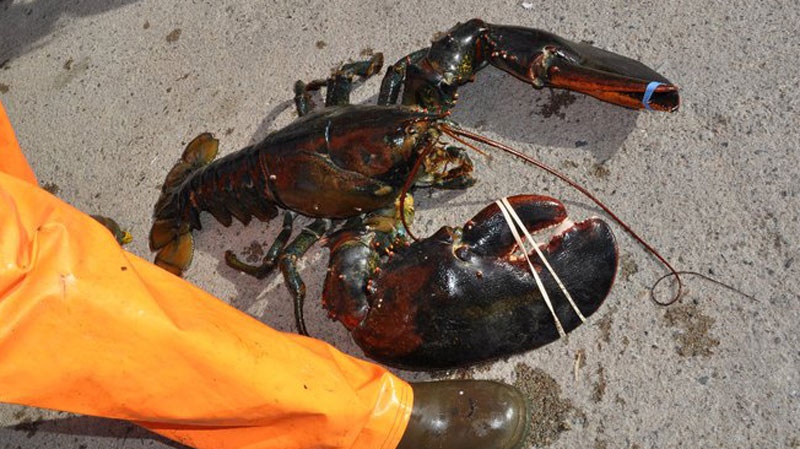 MyNews contributor Kerri Hatt shares this photo of a massive 22.3 lb lobster her dad and brother caught while fishing on the Bay of Fundy in N.B. on Tuesday, June 7, 2011.

A New Brunswick fisherman is selling a behemoth 10-kilogram (22.3 pound) lobster that he and his son hauled up Monday from the Bay of Fundy.

Troy Mitchell, 47, said the lobster, which he named "Tiny," is the largest he's ever caught in his 30-plus year career.

"Every time you haul up a trap it's a mystery what may be in it," he said Tuesday in a telephone interview with CTV.ca.

Mitchell has put the lobster up for sale online in hopes someone might want to save Tiny, either to donate to the Huntsman Marine Science Centre in St. Andrews, N.B. to display or to set him free.

He says his preference is to donate the proceeds to the local Cancer Society charity, instead of selling the lobster to the market within the next few days.

Mitchell says it's most likely a lobster of this size would end up being canned.

Experts from the Huntsman's centre told Mitchell the male lobster is likely about 40-years-old.

Mitchell said Tiny, not including his claws or tail, measured about 22 centimetres (8.75 inches).

Mitchell and his son, Ian, hauled the giant crustacean on board their vessel, named Bumpie's Boat after Troy Mitchell's father. They fish out of Back Bay, N.B.

Mitchell, who said his family has been fishing for generations, won't say exactly where he laid his traps, but he's certainly on a good run. He said he caught an 8.6 kilogram (19 pounds) lobster only a few weeks back.

"They are not really common, they are really rare," he said.

According to the Guinness Book of Records, the largest lobster ever found was a 20-kilogram (44 pounds) beast, caught off the coast of Nova Scotia in 1977.

An average caught lobster is in the 1.5 pounds to two pounds range.

Three years ago in New Brunswick, a 10-kilogram lobster named Dee-Dee was saved from a boiling pot by a $1,000 donation, even though a fish shop owner was offered $5,000 by a group that wanted to eat it.