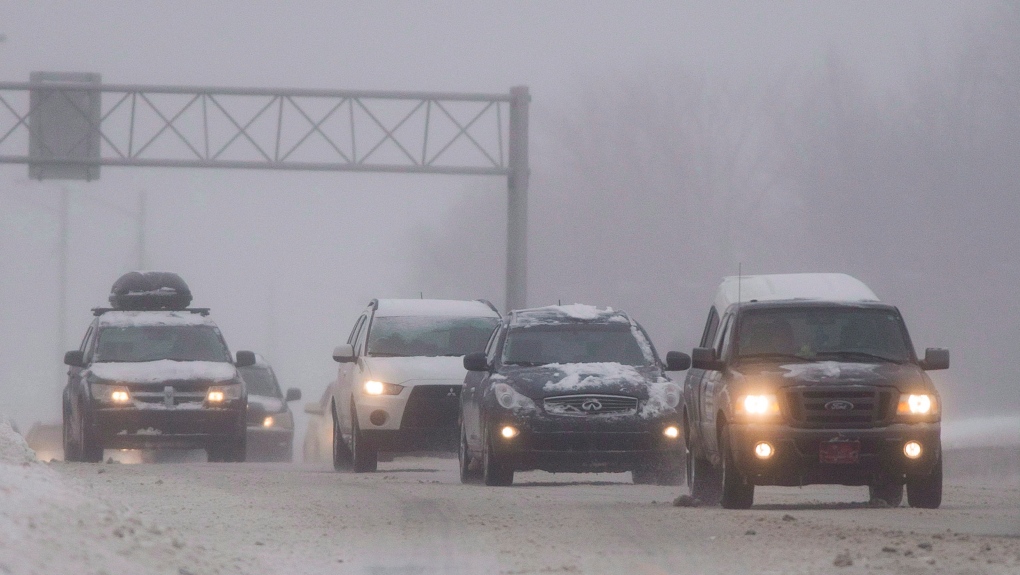 Motorists make their way along highway 40 in Montreal on December 22, 2013 as a winter storm warning has been issued for the region. THE CANADIAN PRESS/Graham Hughes

MONTREAL -- Quebec will reportedly bring forward the mandatory date by which winter tires must be put on all vehicles in the province and also increase fines for those who don't follow the rules.

It remains the only Canadian jurisdiction that requires drivers to have winter tires by law -- between Dec. 15 and March 15. The nine-year-old legislation comes with the threat of a fine from $200 to $300.

In B.C., drivers are required to have winter tires installed on their vehicles if travelling on designated highways around the province, mainly in the Interior and near high mountain passes.

Despite some occasional calls in other parts of the country, there doesn't appear to be an appetite for Quebec-style rules in other provinces.

Advocates agree that winter tires should be used in the vast majority of the country -- the Maritimes and the Prairies along with large swaths of Ontario for example -- but suggest an incentive-based approach would help increase the number of users.

"The call often comes for (provincial) legislation nationwide, but we think that may be a step too far," said Lewis Smith, national projects manager at the Canada Safety Council. "Some places in Canada just don't need them."

Winter tires are recommended in areas where temperatures drop below 7 C, which excludes some parts of the country.

Smith said awareness campaigns that educate drivers about the differences between all-season tires and winter tires in frigid conditions are far better than forcing the issue.

He cited a Rubber Association of Canada survey that suggested only half of Canadian motorists outside Quebec use winter tires.

George Iny, executive director of the Automobile Protection Association, says his organization is in favour of widespread winter tire use, but believes incentives would work better.

In Ontario, for example, insurers have been required recently to provide a discount for those who use winter tires, while Manitoba's insurance board offers low-interest financing for such tires.

"If we can see that it is able to move the needle, that's the kind of incentive-based compliance we'd hope to see," said Iny.

"I would like to believe that if people are doing something that's incentive-based, maybe they would have less of a mindset to try to avoid it."

Iny said there have been unexpected consequences to the Quebec law, which the government is considering changing to make winter tires mandatory between Nov. 15 and March 15.

Because there is a hard deadline to put them on, but no firm deadline to remove them, many Quebec drivers keep winter tires on throughout the summer, which creates another set of performance issues in warmer months.

Iny said Quebec's apparent plan to bring forward the date would only cause headaches for retailers, who already deal with a crush come the fall.

Before the law was passed in late 2008, an estimated 80 per cent of cars were equipped with winter tires, so legislation only had an impact on the last fifth of motorists, Iny said.

"Part of the reason why it was accepted in Quebec is that many people were already there," he said.

"But I can see why a government would be reluctant and that's why, again, we'd prefer something incentive-based. We would like it if the private insurance provinces (the Maritime provinces for example) would offer an incentive."

A 2012 report by the Traffic Injury Research Foundation found there had been a 36 per cent reduction in the number of people killed or seriously injured in winter collisions in Quebec since the law was passed.

The suggestions for moving up the deadline in Quebec came during public meetings, with certain parts of the province experiencing harsh winter conditions earlier than the heavily populated southwestern part of the province.

"For CAA-Quebec, it's not so much the date as the temperature," said spokeswoman Annie Gauthier. "The magic number -- the moment where one should install winter tires is when the temperature drops below 7 C."

According to reports, the Couillard government is expected to table legislation next week, before the holiday break.