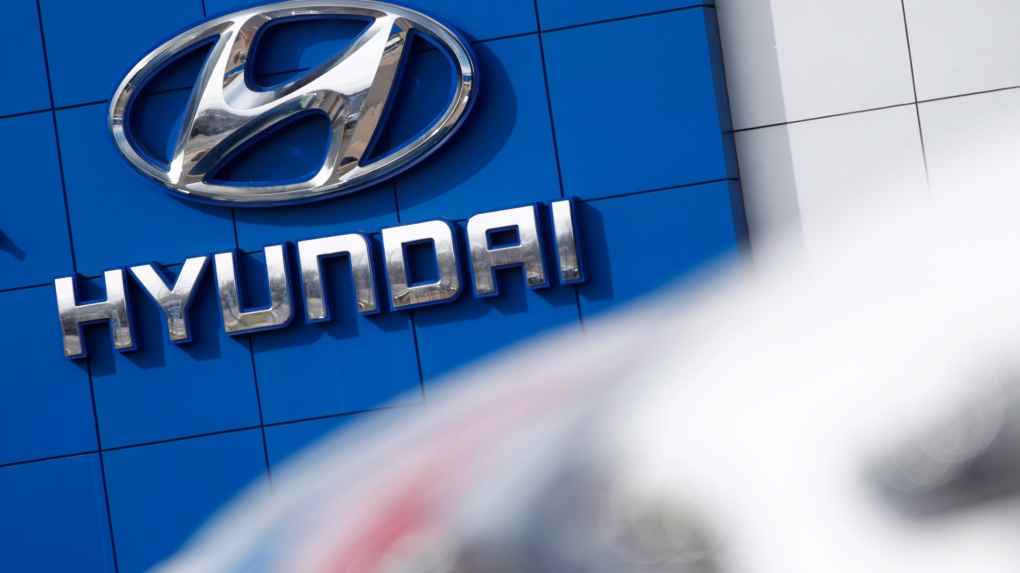 FILE- In this April 15, 2018, file photo the company logo hangs on the side of a showroom in the south Denver suburb of Littleton, Colo. (AP Photo/David Zalubowski, File)

Hyundai and Kia must pay US$137 million in fines and safety improvements because they moved too slowly to recall over 1 million vehicles with engines that can fail.

The National Highway Traffic Safety Administration announced the penalties on Friday. They resolve a three-year government probe into the companies' behaviour involving recalls of multiple models dating to the 2011 model year.

"It's critical that manufacturers appropriately recognize the urgency of their safety recall responsibilities and provide timely and candid information to the agency about all safety issues," NHTSA Deputy Administrator James Owens said in a statement.

Hyundai will pay $54 million and invest $40 million to improve safety operations under an agreement reached with the agency. The company must build a field test and inspection laboratory in the U.S. and put new computer systems in place to analyze data to identify safety issues. Another $46 million in penalties will be deferred as long as the Korean automaker meets safety conditions, NHTSA said in a prepared statement.

Kia, which is affiliated with Hyundai, must pay $27 million and invest $16 million on safety performance measures. Another $27 million payment will be deferred as long as Kia behaves.

Kia will set up a U.S. safety office headed by a chief safety officer. Both companies will have to hire an independent third-party auditor to review their safety practices, and they committed to organizational improvements to identify and investigate potential U.S. safety issues.

"We value a collaborative and co-operative relationship with the U.S. Department of Transportation and NHTSA, and will continue to work closely with the agency to proactively identify and address potential safety issues," Brian Latouf, Hyundai's chief safety officer, said in a prepared statement.

A message was left Friday seeking comment from Kia.

The U.S. safety agency opened its probe in 2017 after Hyundai recalled about 470,000 vehicles in September of 2015 because debris from manufacturing could restrict oil flow to connecting rod bearings. That could make the bearings wear out and fail, potentially causing the four-cylinder engines to stall or catch fire. The repair was an expensive engine block replacement.

NHTSA said in investigation documents that Hyundai limited the recall to engines made before April of 2012, saying it solved the manufacturing problem after that. In addition, Kia didn't recall its cars and SUVs with the same 2.4-litre and 2-litre "Theta II" engines, contending they were made on a different assembly line at a plant in Alabama.

But 18 months after the 2015 recall, both automakers announced recalls of 1.2 million more vehicles for the same problem, including models the automakers originally said weren't affected, NHTSA said when it opened the investigation.

Engine failure and fire problems with Hyundais and Kias have plagued the companies for more than five years, affecting the owners of more than 8 million vehicles.

In June of 2018, NHTSA opened two more investigations of the automakers that have yet to be resolved. The agency said it had owner complaints of more than 3,100 fires, 103 injuries and one death. It granted a petition seeking the probes filed by the non-profit Center for Auto Safety, a consumer advocacy group.

Jason Levine, executive director of the centre, said they petitioned NHTSA seeking an investigation because no one seemed to be listening to complaints from Hyundai and Kia owners.

"Only time will tell if this sort of deferred penalty and mandated investments in safety operations will actually deter similar behaviour in the future by these or other manufacturers," Levine said.

The new investigations, one for Hyundai and the other for Kia, covered non-crash fires in almost 3 million vehicles across the model lineups of the affiliated Korean automakers.

In documents, NHTSA reported that it had received complaints of engine compartment fires, as well as fires involving other components including tail light housings, wiring harnesses, and light bulbs.

Later the affiliated Korean automakers acknowledged that the engine block replacements may not have been properly done in all cases by dealers. Kia said a pipe carrying high-pressure fuel may have been damaged, misaligned or improperly tightened during the repairs, allowing gas to leak and hit hot engine parts, causing more fires.

More recalls followed. Hyundai and Kia have recalled more than 4.7 million vehicles, and they did a "product improvement campaign" covering another 3.7 million to install software that will alert drivers of possible engine failures.

Data collected by the Center for Auto Safety show 31 U.S. fire and engine-related recalls from Hyundai and Kia since 2015. The recalls involve more than 20 models from the 2006 through 2021 model years totalling over 8.4 million vehicles.

In some cases, such as nearly 200,000 vehicles recalled in September for braking system electrical shorts, the automakers urged owners to park them outside because fires could start after the vehicles were turned off. There also were recalls for brake fluid leaks, fuel pump cracks, damaged catalytic converters and problems with fuel igniting prematurely in the cylinders, all of which could set engines ablaze.