Edmunds: How the 2021 Tesla Model S and Porsche Taycan compare 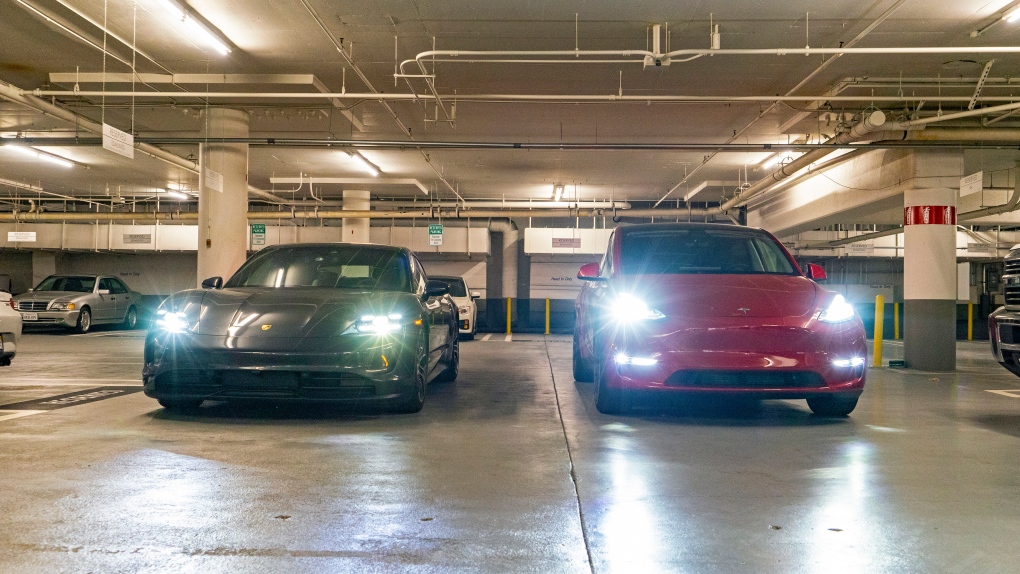 This photo provided by Edmunds shows a 2020 Porsche Taycan and 2020 Tesla Model Y Performance at the beginning of a daylong range and consumption test. (Rex Tokeshi-Torres/Edmunds via AP)

The Tesla Model S debuted nearly a decade ago and instantly portended the future of electric vehicles. Here was a sleek-looking EV with intriguing new technology features and unmatched performance and range. Tesla's continual updates along the way have kept the rest of the automotive industry in catch-up mode. Only recently has a model come out to rival the Model S: the Porsche Taycan.

The Taycan isn't as revolutionary, but it offers similar capabilities plus the aura of Porsche's sports car-building ethos. Is it good enough to unseat the Model S? Edmunds' experts tested both to find out.

The Model S Long Range -- the least expensive trim -- offers an EPA-estimated 412 miles of range. While Edmunds has found in its own range testing that Tesla's EPA numbers are typically a little too optimistic, this is still among the longest distances you'll get from an EV. Access to Tesla's proprietary network of nationwide Supercharger fast-charging stations is another boon.

On paper, things aren't so sunny for the Porsche Taycan. As of publication time, the longest EPA-estimated range is 227 miles for a midlevel Taycan 4S with the Performance Battery Plus. While that's below the Model S, a Taycan 4S overachieved in Edmunds' testing, driving 323 miles before running out of juice. The upshot? In real-world driving you won't notice as much of a range difference between these two cars as the specs suggest.

Porsche doesn't have its own charging network, but it's working with third-party companies to greatly increase the number of charging stations nationwide.

A base 2021 Tesla Model S Long Range starts at around $80,000; the new Plaid variant, which has yet to come out, will be around $120,000. The Model S comes well equipped with standard features such as an adaptive air suspension, heated front and second-row seats, and a 22-speaker audio system. Tesla also includes driver aids such as adaptive cruise control, blind-spot monitoring and forward collision mitigation as standard.

The Taycan is more expensive. A base 2021 Taycan starts at around $81,000, but features such as heated seats and adaptive cruise control are optional extras. The top-level Turbo S starts at more than $185,000 and still doesn't match a base Tesla's features. Build quality in the Taycan is of a higher standard, and you can do a lot more to customize a Taycan with special colours and interior materials. But it's not enough to sway this category in Porsche's favour.

The Model S' interior is clean and simple, with a nearly buttonless design that puts most major controls -- including those for the climate control and audio system -- in the massive centre-mounted touchscreen. Further back there's a hatchback liftgate that reveals a sizable cargo area. There's a decent amount of room for rear passengers too.

Like the Model S, many of the Taycan's features are controlled through a touchscreen. But Porsche fortifies them with traditional stalks, knobs and buttons for features such as the cruise control, windshield wipers and lighting. It's a more familiar and easier-to-use experience. Rear passenger and cargo space are more limited compared to the Model S, but overall the Taycan is a nicer vehicle to spend time in.

Tesla's driver aids are some of the best in the business. Activating some of these features isn't very straightforward, but they work well in practice. There are other neat features such as the ability to play video games on the touchscreen, which is fun to do while you're parked and charging the car. You can also sync your Spotify account directly to the car, though Tesla only offers Bluetooth smartphone connection.

You won't find any whimsical video games or fart-like noise generators in a Taycan -- that would be so un-Porsche-like -- but you do get a more sensible collection of tech. The Taycan's driver aids function smoothly and easily. You also get Apple CarPlay, which is a smartphone connection that lets you control apps on your phone through Porsche's touchscreen. It's not available on the Model S.

Maximum acceleration is lightning quick with both of these luxury sedans. The Taycan, though, does a better job of giving you a feel of the road when going around turns. In general, it's more nimble and athletic. It also has slight advantages for cruising. It's a little quieter, with less wind and road noise on the highway, and its ride is smoother.

These two luxury EVs are very closely matched. The Tesla Model S offers more range and features for less money, while the Porsche Taycan counters with more refinement and driver engagement. From Edmunds' standpoint, the Taycan squeaks out a slight win here.