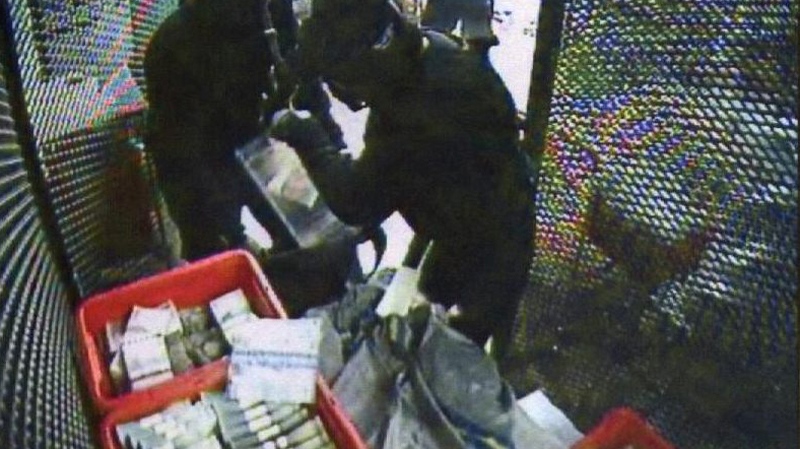 Prosecutor Leif Gorts said five men were charged with aggravated robbery and five with complicity, in one of the largest police investigations in Swedish history.

Police say three masked gunmen last September dropped onto the roof of a Stockholm cash depot from a helicopter, broke into the building through a roof window, and set off explosions inside before hoisting themselves and their haul back up on rope lines.

They say they have recovered some of the cash but that most remains missing and that at least two unidentified suspects remain at large.

If found guilty, the men face prison terms of up to 10 years. Nine of the suspects are Swedes and one is Syrian. All the men, aged between 23 and 38, have denied the charges.

Gorts said Swedish police were tipped off already in August by police in Serbia that robbers planned a heist with a helicopter and expected to steal 10 million euro ($13 million). He said the robbers had tried, but failed to recruit a helicopter pilot in Serbia, before finding another pilot in Sweden.

Gorts said police started an investigation to prevent the robbery and probed two of those that have now been charged, but didn't manage to find out where or when the heist would take place.

Another prosecutor, Bjorn Frithiof, said the massive investigation into the robbery included wiretapping, DNA analysis, and IT forensics.

Frithiof said he believes he has strong evidence against the men and chances are high they will be convicted.

However, the lawyer of the suspected helicopter pilot, Leif Silbersky told local news agency TT the evidence is not as strong as the prosecutor claims.

"The way I see it, the prosecutor has opted for quantity instead of quality," Silbersky said.

The five men charged with robbery include the suspected helicopter pilot, one man suspected of breaking into the depot, and three men suspected of using fake explosives to stop police from getting to the scene.

The other five are suspected of planning the attack in different ways, providing explosives, and faking an alibi for the pilot by staging a minor car accident involving his vehicle at the time of the robbery.

The trial starts on Aug. 2.