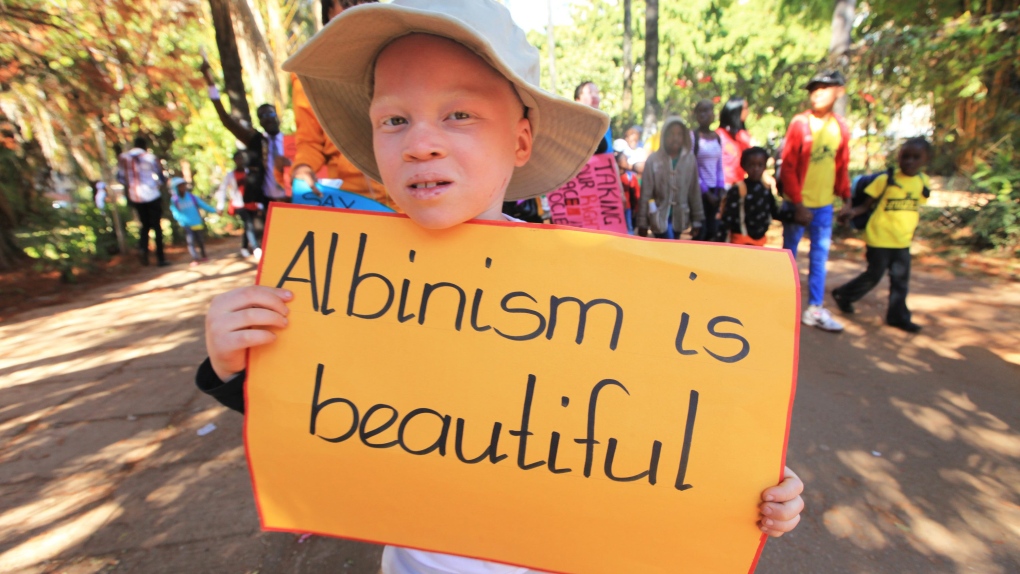 An Albino child marches on the streets of Harare during belated World Albinism Awareness Day in the capital Harare, Saturday, June, 18, 2016. Rejected, ostracized and laughed at, albinos and their parents in Zimbabwe describe life in a country with little tolerance for them as hell on earth. (Tsvangirayi Mukwazhi/THE ASSOCIATED PRESS)

HARARE, Zimbabwe -- Loveness Mainato was admitted into a hospital with severe depression after giving birth to a second child with albinism. Her husband deserted her, and some of her relatives accused her of being cursed.

Rejected, ostracized and laughed at, albinos and their parents in Zimbabwe describe life in a country with little tolerance for them as hell on earth.

It is a regional concern. In neighbouring Malawi, 18 albino people have been killed since 2014 because they are targeted for their body parts, according to a report this month by Amnesty International. Similar murders also have been reported in Tanzania.

No such killings have been recorded in Zimbabwe so far. But albinos and their parents say life is just as tough because of deeply rooted myths and prejudices.

Some believe sleeping with albinos can cure HIV, while others see albinism as a curse, said Anderson Chimusoro, a World Health Organization disease prevention and control officer in the capital, Harare.

And deteriorating economic conditions in Zimbabwe mean many albino people struggle to get skin lotions and other medicines, said Nesbert Mudzviti, an occupational therapist born with albinism.

WHO estimates that 39,000 people out of the southern African country's 13 million people are born with albinism.

"Many of us die a little inside each time we step into the public," said Gwen Marange, an albino who said she divorced her husband because he made fun of her condition.

She said men whistle and verbally abuse her when she walks in the streets.

Mainato is not an albino, but two of her four children are. After the second was born, her husband married their maid and walked out on her, saying he couldn't risk another albino child, she said.

"My landlord would tell me to hide my children each time there were visitors," said Mainato, who formed the Albino Charity Organization in 2009 after overcoming her depression.

Both she and Marange spoke in Harare at an event organized by the United Nations on June 15 to mark International Albinism Awareness Day.