Xhosa rituals to be featured in Mandela's funeral 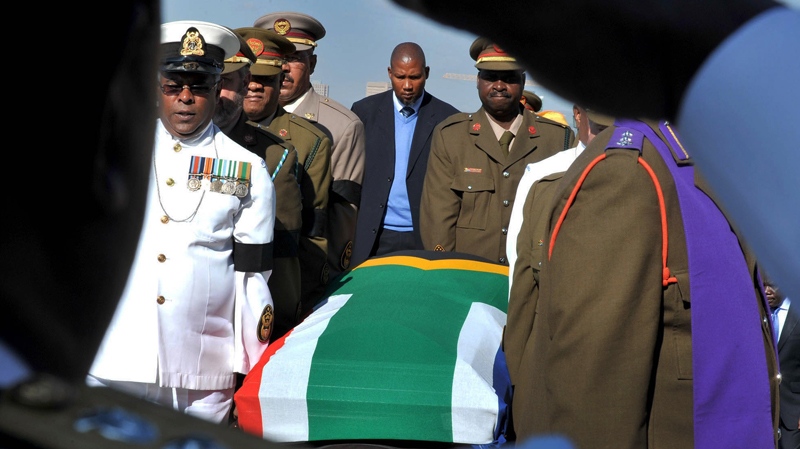 In this photo taken Wednesday, Dec. 11, 2013, Nelson Mandela's grandson Mandla Mandela, back center, walks behind the flag covered casket of former South African President Nelson Mandela during the lying in state at the Union Buildings in Pretoria, South Africa. In keeping with Xhosa burial traditions, it requires that a family elder stay with the deceased and explain to his spirit what is happening. (AP / Elmond Jiyane, GCIS)

JOHANNESBURG, South Africa -- An ox will be slaughtered, the deceased will be wrapped in a leopard skin and a family elder will keep talking to the body's spirit: The state funeral for South Africa's anti-apartheid icon Nelson Mandela on Sunday will also include those rituals from the tradition of the Xhosa people, to whom Mandela's Thembu clan belongs.

The funeral in Mandela's southeastern childhood village of Qunu will be an eclectic mix of traditional rituals, Christian elements and those of a state funeral.

Here's a brief look at the Xhosa people and the main elements of their burial traditions:

The majority of the country's 7 million Xhosa people live in the country's southeast, in the Eastern Cape province. Their language, Xhosa, is famous for its three click sounds. The Xhosa recognize the presence of ancestral spirits and call upon them for guidance. Veneration for the world of the ancestors, or Umkhapho in Xhosa, plays an important role in their culture. The ceremonial slaughtering of animals is one of the ways the ancestors are called upon for help, according to a website of South Africa's Tourism Department.

Talking to the body

Following a tradition called Thetha, Xhosa culture requires a family elder to stay with Mandela's body and explain to his spirit what is happening. "When the body lies there, the spirit is still alive," said Rev. Wesley Mabuza, chairman of South Africa's Commission for the Promotion and Protection of the right of Cultural, Religious and Linguistic Communities.

"The body must be informed of whatever is happening before the funeral," said Nokuzola Mndende, director of the Icamagu Institute for traditional religions. The body must rest for one night in his family house before the burial. "On Sunday he must then be told 'Madiba, we are now burying you'," she added, using his clan name in an expression of affection and respect.

Wrapped in a leopard skin

The deceased must be wrapped in a special garment. For people of a high rank like Mandela, who is the son of a traditional clan chief, the body or the casket is usually wrapped in a leopard's skin, according to Mndende. "But because Madiba is also a former statesman, maybe there will also be the South African flag," she said. Mabuza added: "It's a ritual showing deep respect for the deceased."

Xhosa tradition requires the slaughtering of an animal early on the day of the burial. After the ritual throat slitting, the animal will be eaten by the mourners, usually outside the family house. For people of a high rank like Mandela an ox will be killed, Mndende said.

"That ox is slaughtered, cooked and eaten all in one day," she said. In some regions no salt will be used to season the meat, but in the area of Mandela's clan that's up to the family's discretion, she added.

End of the mourning

A year after the burial another ox will be slaughtered and eaten by the family to mark the end of the mourning period, in a tradition called Ukuzila. "There must be a time when the mourning is broken," Mndende said.

About another year later a joyous ceremony is celebrated to bring back the deceased into the family so that the person will henceforth be looking over the family and its children as a well-meaning ancestor, a ritual called Ukubuyisa, according to Mndende.