Would you buy 'ugly' vegetables? That's how a grocery chain fights waste 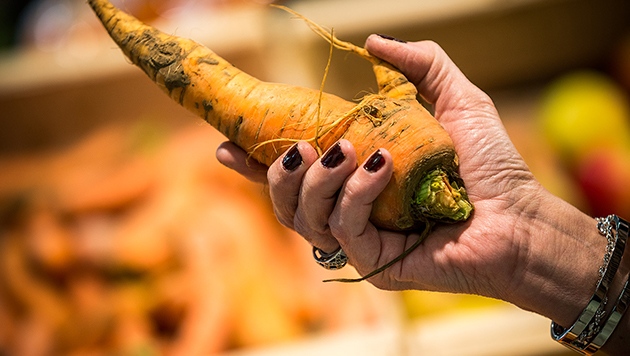 French supermarket giant Intermarche launched an anti-waste initiative to get consumers to buy misshapen fruits and vegetables that would typically be thrown away. (Photo courtesy Intermarche)

A French supermarket chain that launched an anti-waste campaign is getting some international attention for marketing and selling “ugly” fruits and vegetables that are typically destined for the trash, not the dinner plate.

Grocery giant Intermarche recently launched the cheeky “Inglorious Fruits and Vegetables” campaign to “celebrate the beauty” of malformed or misshapen produce, including the “Grotesque Apple,” the “Disfigured Eggplant” and the “Unfortunate Clementine.”

The result is a slick initiative with a serious message aimed at reducing food waste. An estimated 300 million tons of produce a year are thrown out, despite food guidelines that suggest individuals should be consuming at least five fruits and veggies daily.

Sometimes the visually unappealing produce is tossed by the growers themselves, despite being just as edible and healthy-to-eat as their smooth and shiny produce brethren.

To combat food waste, Intermarche bought from their growers the products that are typically disposed of, cleared entire aisles in store to make room for them, and marketed the less-than-desirable product with special signage and labels.

As the ultimate incentive, Intermarche also sells the imperfect fruits and veggies at a 30 per cent discount. Packaged dishes made from the produce, including orange juice and carrot soup, are distributed in-store.

Intermarche says that during the first two days of the campaign, each of their stores sold on average 1.2 tons of the malformed fruits and veggies. In addition, stores saw a 24-per-cent overall traffic increase at their stores.

French foodies appear to be receptive, and the awareness campaign is reaching far beyond France’s borders via social media. The YouTube video, created by marketing company Marcel, has gone viral, with millions of views since it was posted in mid-June.

I'd be quite happy to buy a 'disfigured eggplant' or a 'ridiculous potato' (Intermarche's new brands). Bienvenue aux fruits moches

I can't believe my new hero is a French supermarket chain….@intermarche pic.twitter.com/XecItzcF08

Les Fruits & Legumes Moches - what Intermarche in France did to combat food waste - this should be everywhere: http://t.co/CDbDxTle9c