World's oldest man, who said secret was smiling, dies at 112 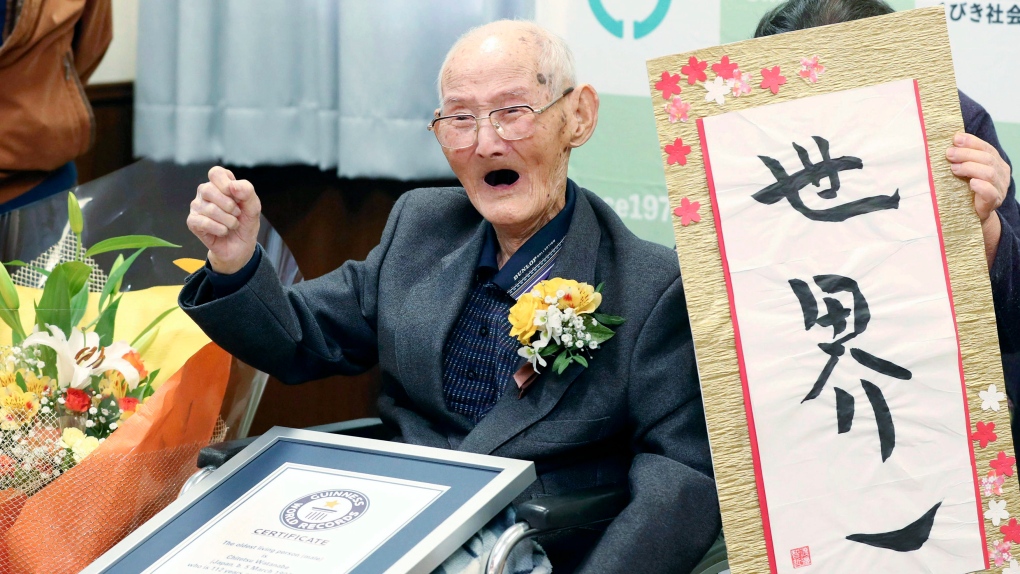 Chitetsu Watanabe, 112, poses next to the calligraphy he wrote after being awarded as the world's oldest living male by Guinness World Records, in Joetsu, Niigata prefecture, northern Japan Wednesday, Feb. 12, 2020. (Kyodo News via AP)

TOKYO -- A Japanese man who received his certificate as the world's oldest man with a raised fist and big smiles earlier this month has died at 112.

Guinness World Records had given the certificate to Chitetsu Watanabe on Feb. 12. The organization and the funeral home handling his services confirmed Tuesday he had died Sunday. No cause was given.

He had not been able to eat recently and developed a fever and difficulty breathing a couple of days before his death, Japan's nationally circulated newspaper Mainichi reported, citing family sources.

Watanabe's family did not immediately answer calls to their home.

Watanabe was born in 1907 and worked in Taiwan for 18 years. After returning to Niigata, northern Japan, he worked for the prefectural government until retirement.

He grew fruit and vegetables on the family farm and loved cream puffs and bonsai, the Japanese traditional art of raising small sculpted trees.

He used to say the secret to longevity was to keep smiling.

Guinness in Japan offered its condolences to his family.