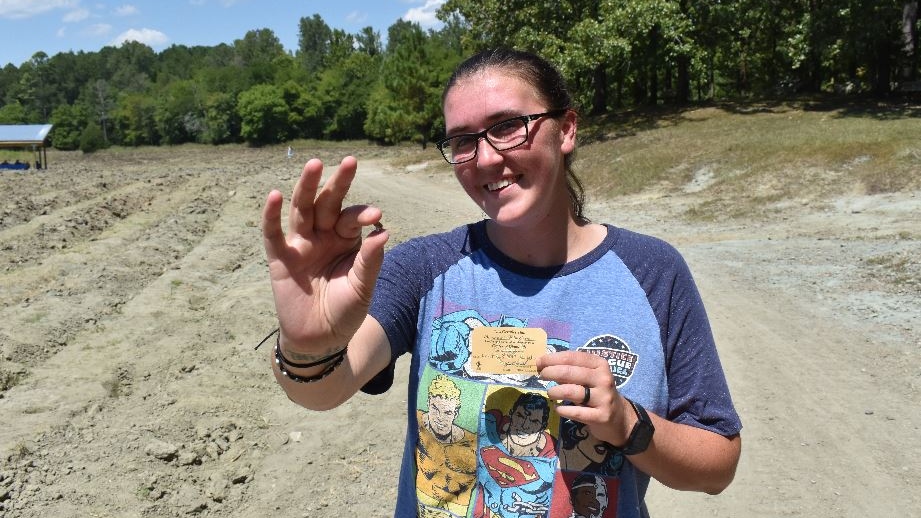 A woman visiting a park in Arkansas was able to find a diamond in the rough, literally.

Last Friday, Miranda Hollingshead of Bogata, Texas, had intended to pick up a transmission for her car, but her siblings were in town and wanted to do something fun.

The 27 year old had never been to Arkansas’s Crater of Diamonds State Park, so they decided to cross state lines to go diamond searching for the first time.

It only took Hollingshead about an hour to make the diamond discovery at the base of a hill in the park’s 37.5-acre diamond search area.

“I was sitting in the shade, watching a YouTube video on how to find diamonds,” Hollingshead said on Arkansas State Parks website.

“I looked over at my kid for a second, and when I looked down, I saw it mixed in with other rocks. I shook my hand across it to make sure what it was, picked it up, and yelled across the field to my mom, ‘I think I got one!’”

After showing her family, Hollingshead carried her find to the Diamond Discovery Center, where park staff registered it as a 3.72-carat yellow diamond.

Hollingshead said if she doesn’t sell the diamond, she’ll probably have it mounted in a ring.

It is the largest diamond registered at the Crater of Diamonds since March 2017, when a teenager found a 7.44-carat brown gem.

It is the largest yellow diamond since a visitor from Oklahoma City found a 3.85-carat jewel there in October 2013.

“Every diamond found at the park is beautiful in its own way, and this one is certainly no exception,” said park interpreter Waymon Cox.

“It’s about the size of a pencil eraser, with a light yellow color and a sparkling, metallic lustre. Ms. Hollingshead said her gem’s unique shape reminded her of a rounded molar, with a small indentation in one end.”

Cox pointed out that rainfall likely played a role in Hollingshead find.

“Much of the ground where Ms. Hollingshead found her diamond is made of unweathered volcanic rock,” he explained.

“When it rains, flowing runoff often leaves loose gravel, and sometimes diamonds, on the surface in these areas. Diamonds have a brilliant, adamantine luster that makes them easy to spot and Ms. Hollingshead happened to be sitting in just the right place to see the diamond sparkle in the sun.”

About one in 10 diamonds are found on the top of the ground by observant visitors.

Many visitors choose to name the diamonds they find and Hollingshead and her son named her gem the Caro Avenger.

“He chose the name Caro, and I am a fan of superheroes, so it seemed like a good fit,” she said.

So far, 319 diamonds have been registered at Crater of Diamonds State Park in 2019, weighing a total of 63.49 carats.

The largest diamond ever discovered in the United States was unearthed there in 1924 during an early mining operation.

Named the Uncle Sam, this white diamond with a pink cast weighed 40.23 carats

A park spokeswoman said it does not appraise the value of diamonds and leaves that to the finder.

Over 75,000 diamonds have been unearthed at Crater of Diamonds State Park since the site was discovered in 1906 by John Huddleston, a farmer who owned the land long before it became a state park in 1972.