With war nearby, U.S. shows support for Poland on army holiday

With war nearby, U.S. shows support for Poland on army holiday 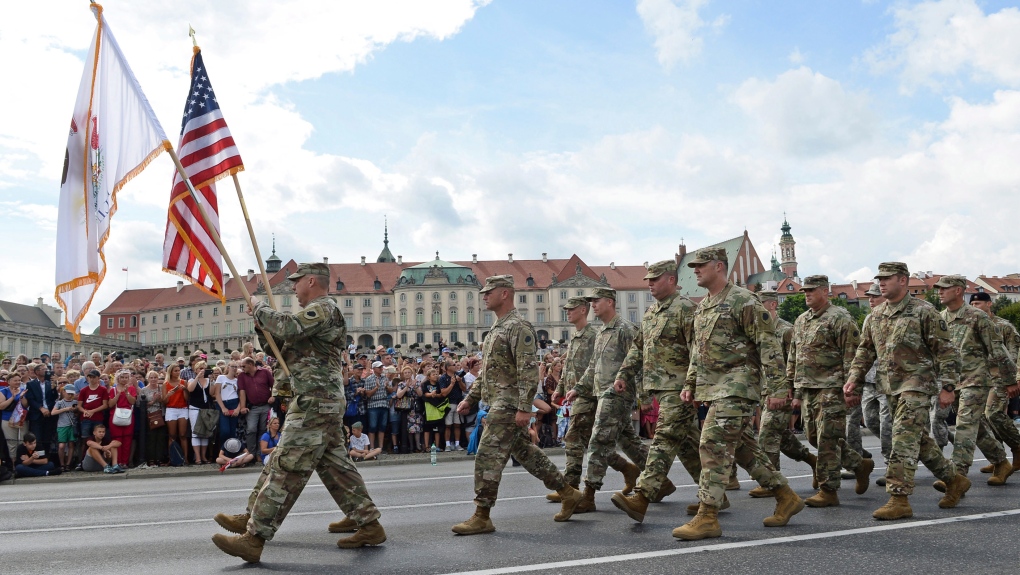 In this Wednesday, Aug. 15, 2018 file photo, a group of US Army soldiers take part in an annual military parade celebrating Polish Army Day in Warsaw, Poland. The Polish government, which is closely aligned with President Donald Trump, has joined forces with the U.S. to co-host an international conference on the Middle East on Wednesday Feb. 12, 2019 and Thursday Feb. 13 in Warsaw. (AP Photo/Alik Keplicz, File)
WARSAW, Poland -

The Polish president and other officials marked their nation's Armed Forces Day holiday Monday alongside the U.S. army commander in Europe and regular American troops, a symbolic underlining of NATO support for members on the eastern front as Russia wages war nearby in Ukraine.

Gen. Darryl Williams, the new commanding general of United States Army Europe and Africa, attended the ceremony in front of the Tomb of the Unknown Solider in downtown Warsaw. Nearby American, as well as British troops, stood alongside displays of military equipment.

The national holiday commemorates Poland's victory in 1920 over Soviet Russia in a key battle credited with stopping the Bolshevik army's westward advance.

"Years pass, but one thing is constant -- when Russia tries to rebuild its empire, it is always an evil empire. It always commits war crimes," Polish Defense Minister Mariusz Blaszczak told reporters ahead of the ceremony, adding that it didn't matter whether Russia was under imperial rule, or being led by communists or today's President Vladimir Putin.

President Andrzej Duda promoted new generals during the ceremony, while the military was holding picnics across Poland seeking to recruit volunteers into the armed forces amid a new sense of threat fueled by Russia's invasion of Ukraine.

American troops have taken part before in the Aug. 15 celebration before but it is the first one since President Joe Biden announced at a NATO summit in late June that Washington was establishing its first permanent U.S. military presence in Poland -- something Polish governments of all stripes have long sought.

The newly named Camp Kosciuszko in Poznan, western Poland, is a shared Polish-U.S. base that becomes the permanent headquarters in Poland for the US Army's V Corps, and the easternmost U.S. Army base in Europe. Many of the American troops there, however, still serve on a rotational basis.

Some of the troops from the base were displaying an Abrams M1A1 main battle tank and other equipment during the commemorations, which included Polish troops from the different branches of the armed forces parading down a street lined with fluttering white-and-red national Polish flags.

The base is named after Gen. Tadeusz Kosciuszko, a hero of the American Revolution who strengthened the fortifications of West Point, and who later returned to Poland to fight imperial Russian forces.

Maj. Kevin Andersen, a U.S. Army public affairs officer, said that troops are having trouble saying the name Kosciuszko (roughly pronounced koh-SHOOSH'-koh) and have been calling it "Camp K" instead. But he said the army has created a video helping the soldiers to learn to say it as a gesture of respect to Poland as it welcomes the Americans.