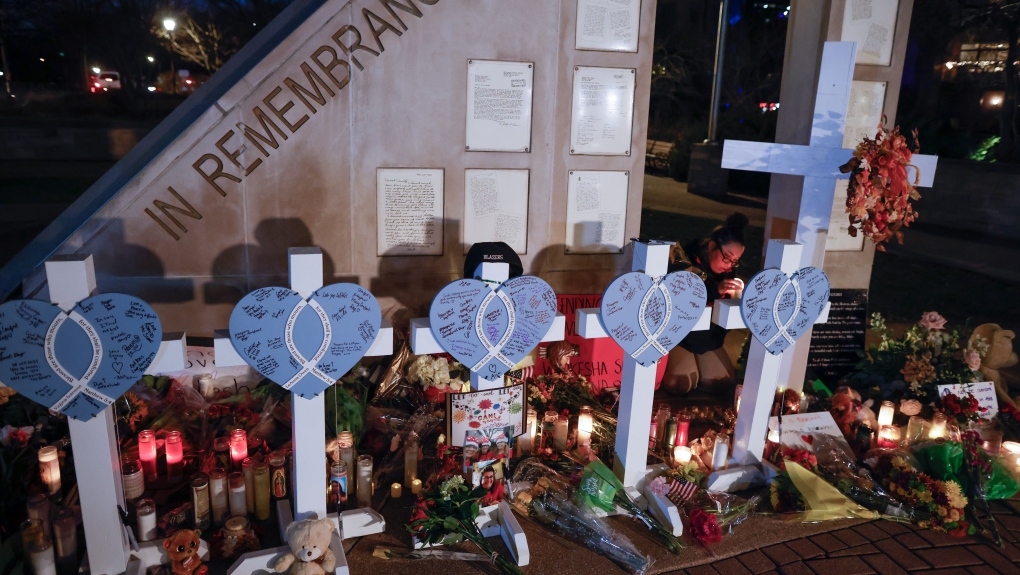 FILE - Amy Mack lights candles at a memorial at Veterans Park for the victims of a deadly Christmas parade crash in Waukesha, Wis., on Nov. 23, 2021. The Wisconsin Assembly is scheduled to vote on a proposal amending the state constitution to make it harder for criminal defendants to get out on bail. Backers of the change up for a vote Tuesday, Feb. 15. 2022, are hoping to capitalize on anger over the killing of six people by a driver who authorities say plowed into a Christmas parade near Milwaukee. (AP Photo/Jeffrey Phelps, File)
MADISON, Wis. -

The judge who oversaw the trial of a man convicted of killing six people when he drove his SUV through a Christmas parade last year says national exposure and encouragement she got for her handling of the case is not why she is running for a pivotal Wisconsin Supreme Court seat.

But Dan Kelly, one of her challengers and a fellow conservative, said Thursday that the case is the only reason Waukesha County Circuit Judge Jennifer Dorow got in the race.

"I'm struggling to think of any other reason that she would believe she would be a qualified candidate for the Supreme Court," Kelly said.

This marks the first time since Wisconsin Supreme Court races became highly partisan that more than one conservative is running. Dorow and Kelly are the two conservative candidates.

The winner will determine whether conservatives maintain their majority on the Supreme Court or liberals take control headed into the 2024 presidential election. The deeply partisan court has had the final say on upholding several Republican priorities for the past decade-plus, including heavily gerrymandered legislative maps and a law effectively ending collective bargaining rights for public workers.

Dorow was flooded with fan mail and gifts for how she dealt with the oftentimes unruly defendant, Darrell Brooks, who represented himself during the livestreamed trial. The jury convicted Brooks and Dorow sentenced him to life in prison without a chance for release.

Dorow, in an interview with The Associated Press on Thursday, said she had to weigh many factors when deciding whether to run, including whether she could mount a winnable campaign.

"No doubt the exposure helps with that," she said in reference to the Brooks trial. "But I am not running for Supreme Court because of the Brooks case. I'm running because I believe I'm the best candidate to do the job."

Still, she said the Brooks case gave voters "a unique opportunity to see me in action, and I think that is a snapshot in time of what I'm capable of doing and what I will do going forward."

But Kelly, who has been in the race since September, said normally candidates for the court have a "track record of a scholastic and a serious approach to the law" that can be examined.

Dorow, in an email to AP sent in response to Kelly's comments, said, "I'll gladly compare my background and credentials to any of the candidates, including Dan, who was never a trial judge and never a prosecutor."

Democrats went even farther in criticizing Dorow, with state party executive director Devin Remiker accusing Dorow of trying to "capitalize on a tragedy."

"We hope that throughout the campaign, she refrains from commenting any further about the Brooks trial so she does not put the outcome in jeopardy," he said.

Dorow launched her run for Supreme Court on Wednesday, exactly two weeks after sentencing Brooks and nearly three months after Kelly got in. This is her first statewide race.

Both Dorow, 52, and Kelly, 58, were appointed to the bench by former Republican Gov. Scott Walker. He appointed Dorow as a Waukesha County circuit judge in 2011 and Kelly to the state Supreme Court in 2016. Dorow won election unopposed twice in the GOP stronghold of Waukesha County, a Milwaukee suburb, while Kelly lost in the 2020 election in his run for a full 10-year term on the bench.

Dorow said her 11 years of judicial experience is a critical asset she would bring to the court, in addition to her past private practice experience as a criminal defense attorney and prosecutor. Kelly had not served as a judge before Walker appointed him to the Supreme Court. Both of the liberal candidates are judges.

Kelly argued that conservatives know what they're getting with him given his years spent on the Supreme Court, but they don't with Dorow.

"I don't think they're in a mood to gamble with who would the next Supreme Court justice is going to be," Kelly said.

Two people are dead and several other were injured after a Laval city bus crashed into a daycare Wednesday morning, according to first responders. The driver of the bus, a 51-year-old man, has been arrested and charged with homicide and dangerous driving, police say.