Wildfires rage on untamed in Greece, Portugal and Corsica 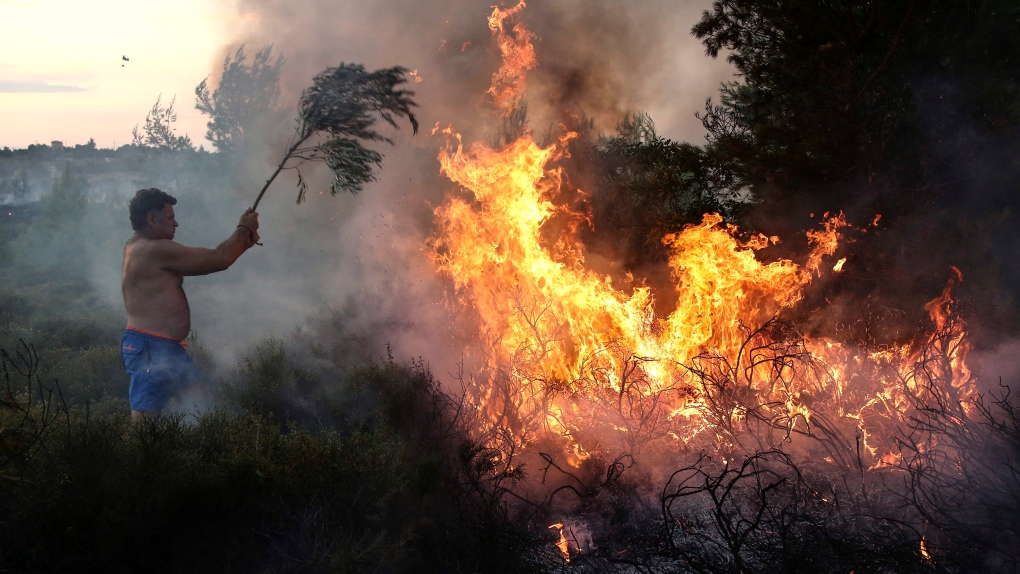 A resident tries to extinguish a forest fire at Kalamos village, north of Athens, on Sunday, Aug. 13, 2017. A total of 53 wildfires broke out in Greece Saturday and more have done so Sunday, including on the beach resort of Kalamos near Athens. (AP Photo/Yorgos Karahalis)

ATHENS, Greece -- Hot and dry weather stoked another round of wildfires burning across southern Europe on Sunday as firefighters in Greece, Portugal and the French island of Corsica struggled to corral the flames.

Greek authorities voiced suspicions that at least some of the several dozen fires that broke out on both the mainland and the island of Zakynthos over the weekend were started deliberately.

Over 4,000 firefighters were battling more than 250 wildfires in Portugal, which requested assistance from other European Union nations.

On Corsica, fires that have raged since Thursday forced the evacuation of 1,000 people, authorities said.

The latest blaze in Greece started Sunday afternoon in a pine forest and had damaged as many as 20 houses by night in a town north of the capital. Kalamos, a town some 44 kilometres (27 miles) north of Athens, is a favourite vacation spot for Athenians.

Authorities said they have shut down a large portion of the local road network as the blaze expanded in several directions, including toward Athens. They also evacuated two children's campgrounds.

While the weather isn't helping, nature was responsible for igniting a minority of the blazes, Gaspar said.

"We know that more than 90 per cent of the fires have a human cause, whether intentional of from negligence. Both are crimes," she said.

Authorities believe a series of fires raging on several fronts on the western Greek island of Zakynthos were started deliberately.

The country's fire service said there were "well-founded suspicions of foul play" after five fires broke out late Saturday and early Sunday, followed by another three later on Sunday morning.

Greek Justice Minister Stavros Kontonis, who is also the local member of parliament, said of the multiple blazes while visiting the island: "This is planned."

The fire service said 10 of the 12 fires burning on Zakynthos were still unchecked, with high winds making it difficult to control the flames.

A total of 53 wildfires broke out in Greece on Saturday and several more did on Sunday, including on the island of Kefalonia, next to Zakynthos.

Authorities said the multiple blazes had stretched firefighting capabilities to the limit. Firefighting planes and helicopters cannot fly at night, adding another degree of difficulty. In Zakynthos, authorities were monitoring the progress of the flames with a small camera-equipped drone, which provides information to firefighters on the ground, the fire service said.

Portugal has been especially hard hit by wildfires, including one that killed 64 people in June, during a summer marked by high temperatures and a lack of rain.

Wildfires in Portugal this year have accounted for more than one-third of the burned forest in the entire 28-country European Union.

The EU's Emergency Management Service said the amount of forestland blackened in Portugal as of Aug. 5 was about five times larger than the average recorded in the country between 2008 and 2016.

French Interior Minister Gerard Collomb said there have been no casualties from the fires thanks to the efforts by 1,200 firefighters and the air teams that carried out 300 water drops in 24 hours.

While the mainland fires were tamed over the weekend, the Corsica blazes were ongoing and still required "major means," Collomb said.

Firefighters continued to fight wildfires in the Corsican towns of Manso and the hilly Pietracorbara.