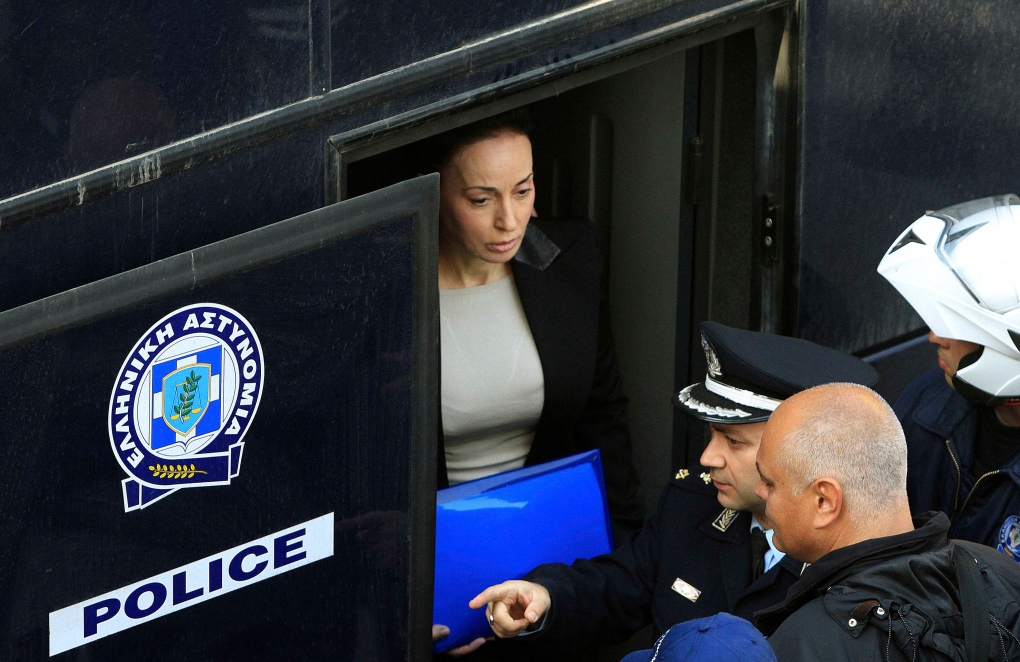 In this April 22, 2013 file photo, Vicky Stamati, wife of former Defense Minister Akis Tsochatzopoulos, arrives at a court for the start of long anticipated corruption trial into allegations of kickbacks in defense contracts in Athens, Greece.

ATHENS -- The wife of an imprisoned former Greek defence minister escaped from a psychiatric hospital where she was serving her sentence on the same corruption charges as her husband, police said Thursday.

Police said they were searching for the woman in Athens. Her escape came a day after another of her multiple appeals to be released from prison was rejected, one of her lawyers, Alexis Cougias, told local media.

Justice Minister Nikos Paraskevopoulos said a disciplinary investigation had been launched into her prison guards.

Stamati was initially imprisoned in 2012 and was convicted in 2013 along with her husband, step-daughter and more than a dozen others in a military procurement corruption case against Tsochatzopoulos.

Stamati was deemed to have known about bribes her husband accepted. She was sentenced to 12 years for money laundering and accepting illegal funds. An appeals trial has not yet been completed.

In poor health, she underwent a double mastectomy shortly after the trial while imprisoned. She was transferred to the psychiatric hospital in December 2013 after suffering a breakdown, attempting suicide and being found to be suffering from severe depression.

Stamati has appealed five times to judicial authorities to be released from prison, citing health grounds and the grounds that her young child is now being brought up by her elderly mother. All appeals have so far been rejected.

The trial against Tsochatzopoulos was Greece's biggest corruption trial in decades. The ex-minister, once one of the most powerful men in the then dominant socialist PASOK party, served as defence minister from 1996-2001. He was initially sentenced to the maximum 20 years in prison. His appeals trial is ongoing.