SASKATOON -- For many Black and racialized viewers, Oprah Winfrey's interview with Prince Harry and Meghan was a high-profile example of how systemic racism plays out in the workplace and how it can lead to feelings of isolation.

That issue was top of mind for viewers throughout the interview, which included several bombshell revelations, such as a claim that one member of the Royal Family was concerned about how dark their son's skin might be; and how he wouldn’t be given security or royal titles.

Several tweeted about similar experiences with an institution that they believed was meant to protect them, but they said ultimately abandoned them.

This was laid bare when the Duchess of Sussex said that her one regret throughout their split from the Royal Family was “believing them when I said I would be protected. I regret believing that, because had I really seen that wasn't happening, I would have been able to do more.”

“The reality is that Meghan’s experience is all of us. And when I mean all of us, I mean Black and mixed-race Black women, women of colour,” Amanda Bartley, a human behavioural researcher, told CTVNews.ca in a phone interview. She said that many racialized groups around the world felt a shared trauma with Meghan.

The stories that Meghan Markle is sharing with Oprah right now about going to HR and her mental health being in jeopardy echo similar stories Black women have about the workplace...whether they’ve told you about it or not. #HarryandMeghanonOprah

This is how systems work. Meghan distinguishes that the individuals were kind, but the business upheld the problems.

It’s also a reminder that kind individuals not challenging the harmful system are complicit. And just as responsible.#OprahMeghanHarry #imwithMeghan

See, Meghan JUST said members of the Royal Family would protect others (i.e. people like Kate), but not her.

Her reason? She believed/was told she would be protected too.

One of Meghan's more troubling revelations was that she, at one point, considered suicide as a way to essentially stop being a burden to the family.

“It should never have to come to us sharing our trauma with the world in order to have it validated,” said Bartley, who also advises for the Centre for Addiction and Mental Health.

“We really need to ring the alarm on the reality that racial trauma takes years off our lives. And that [our] institutions including our health care, specifically our mental health, are not ready to actively care for and protect us,” she said, adding that Afro and Caribbean Canadians and Indigenous communities, for example, have been demanding to be taken seriously for decades.

“Yesterday, the world was riveted for two hours listening, finally listening, to Meghan,” Tanya Hayles, who runs the non-profit Black Moms Connection, which provides mentorship and resources to Black women, told CTVNews.ca in a phone interview.

Hayles said the former “Suits” actor showed how she and many biracial and racialized women are forced to reckon with how others judge them based on their skin tone.

“I don’t get to separate my two identities,” she said, referring to her being both Black and a woman. “And that informs how I’m treated, how I’m received, and informs stereotypes and prejudices that people have.”

'EVERY BLACK WOMAN' HAS BEEN CALLED A VILLAIN

At one point, Meghan said she was disappointed the Royal Family didn’t correct what she called inaccurate reports that Meghan had made Kate, Duchess of Cambridge cry, when it was the other way around. Hayles said this anecdote resonated with Black women who are far too often seen as aggressors simply by asserting themselves or stating a difference of opinion.

“Every Black woman has a story of being turned into the villain because, from birth, we are not protected,” she said. Many online noted it likely wasn’t an accident that in the lead-up to the interview, Royal aides were accusing Meghan of allegedly bullying her staff.

And who will investigate Buckingham Palace for bullying Meghan Markle? https://t.co/er4uuSD7up

Others felt this was related to painting Meghan with the stereotype of the “angry Black woman.”

“Not all women are respected and celebrated equally,” Hayles said. She added that on top of microaggressions, inequality also plays out in companies where women in leadership consciously or unconsciously don't promote or mentor women of colour.

And this can lead to Black workers taking unpaid leave from work or leaving the company altogether in order to have their potential recognized and nurtured, she said.

“I may take a pay cut just to get out of there, and go to a new place where I have to start at the beginning,” Hayles said, referring to the “financial cost” of systemic racism. 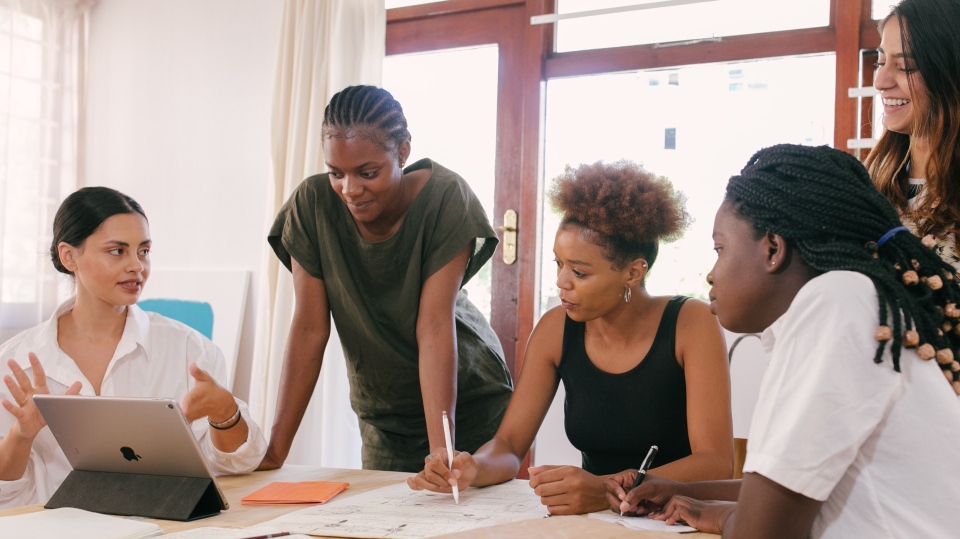 Hayles asserted that, in Meghan’s case, critics inside and outside of Buckingham Palace still refuse to acknowledge that race can play a role. Not every issue facing Black or racialized women is race-related, Halsey said. But when it is, “the gaslighting is so real.”

Among some Black viewers, there was a sigh of relief when race was given centre stage in the interview itself.

“We waited a long time to hear her say race and racism. She was doing a lot to not name that,” said Kike Ojo-Thompson, the principal consultant for The Kojo Institute, which strives to make workplaces less oppressive and anti-racist towards marginalized people.

Meghan has spent her life balancing her biracial identity, and Ojo-Thompson said it’s not uncommon for light-skinned mixed-race or white-passing people to more easily navigate systems that can discriminate against darker, more visibly racialized people.

“Meghan had a particular experience due to her phenotypical features and had a set of experiences in her pre-monarchy life that did not expose her to the more brutal harshness of every-day racism,” she told CTVNews.ca in a phone interview. 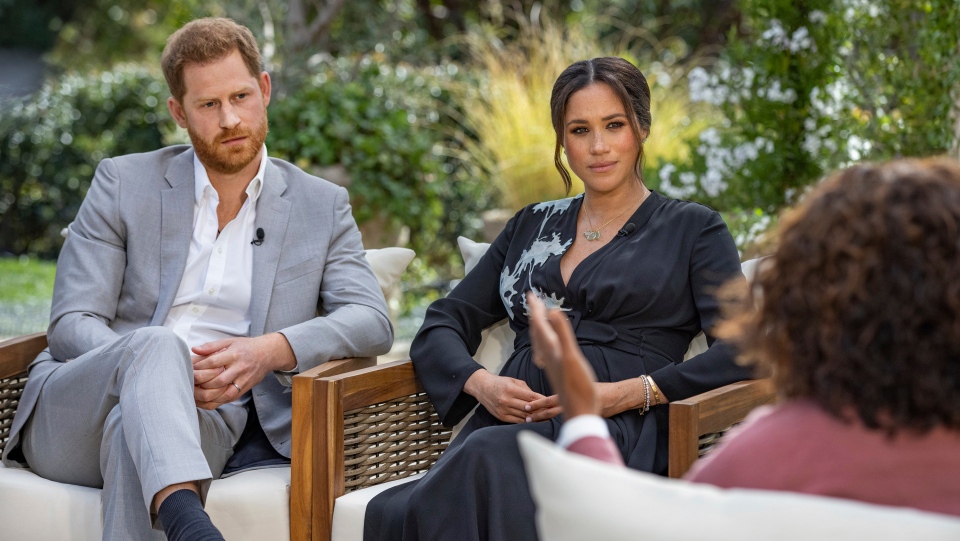 But, she said, a lot of Black and racialized women related to Meghan’s description of a rigged system. “As Black people, we know that the game board changes all the time. And part of the keep-up is [asking], ‘well, what game are playing today? What are the rules?’”

She said exclusionary systems in the workplace can play out in lack of transparency in processes, or policies suddenly being changed or made to exclude racialized people.

“It’s things like whether you can bring someone to a disciplinary meeting, for example,” she said. “Or it’s also how the unwritten rules are applied or not applied to Black people.”

Ojo-Thompson echoed long-standing criticism that organizations’ human resources departments aren’t necessarily meant to protect employees but the institution. And this can disproportionately affect racialized workers, especially if they’re criticizing racism in the workplace.

“[Meghan] went to HR, she asked for help, and lo and beyond, they said no,” she said, adding that “they’re supposed to do this… the systems are not neutral and were never intended to function neutrally. And so if it were neutral, she would’ve been protected.”

'WHITE PEOPLE NEED TO INVEST IN MAKING THIS CHANGE'

Despite the systemic racism she faced, Bartley said Meghan refrained from outright critiquing the monarchy as a flawed system as a whole, instead choosing to criticizing specific unnamed people within in it.

“Our focus on incremental change when we need systemic overhaul seems to be the biggest discrepancy for me,” she said.

Both her and Ojo-Thompson said most workplaces or long-standing systems in Canada and globally aren’t built in a way that helps racialized people process racism.

Ojo-Thompson said there’s no formal department to go to say: ‘well, I left because of racial devastation.’” She said gaslighting can be insidious because through policies, an institution can say “we’re doing this to you and telling you can’t get help. So we’re harming you and going to tell you that you can’t save yourself.”

“Black people and racialized people really need to up their standards,” she said, referring their judging of white allyship, regardless of whether it’s a partner or white people in power.

But Ojo-Thompson acknowledges the cost to even the meagre display of solidarity with racialized people. She said Prince Harry being forced to abandon his titles shows “the risk right now of disrupting white supremacy.”

She said it’s long past time to move past performances. “I can’t call myself an ally to the LGBTQ2S+ community just by putting up ‘Happy Pride Day!’ in June.”

Why does Harry and Meghan's son Archie not have a royal title?

Hillary Clinton on Meghan and Harry's interview: Women 'should not be forced into a mold that is no longer relevant'

Bombshells from royal interview: The most dramatic disclosures from Prince Harry and Meghan