Who will the Democrats pit against Trump in 2020? 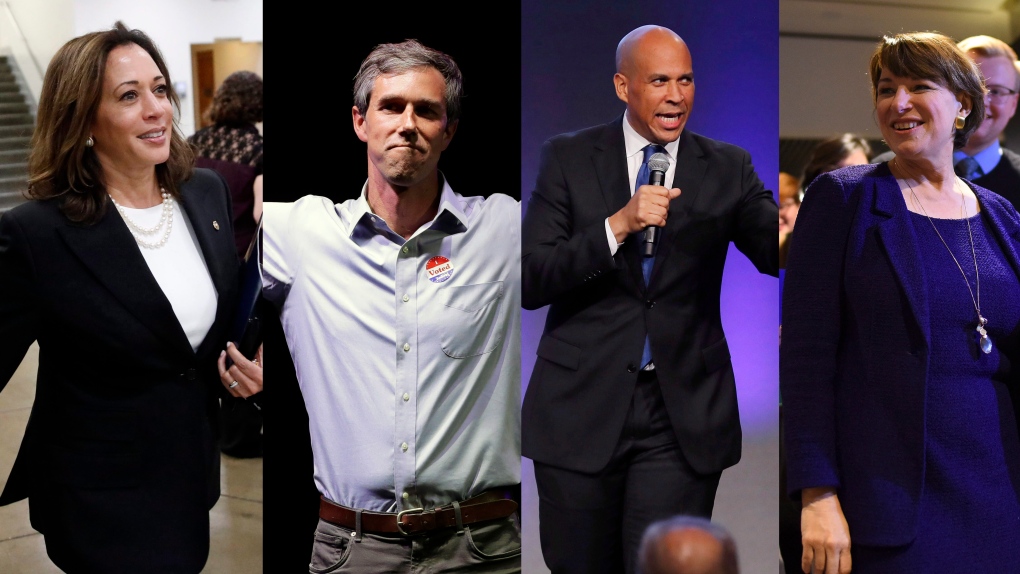 DES MOINES, Iowa -- Democrats beginning to think about the type of person they'd like to see take on U.S. President Donald Trump face an early conundrum: whether a pragmatist has a better chance to take the White House than someone with a more inspirational personal story.

This heart-versus-head balancing act is coming into focus as potential White House hopefuls begin making trips to Iowa, home to the first presidential caucus in 2020, ahead of formally announcing their candidacies.

Sen. Amy Klobuchar of Minnesota will be in the state on Saturday, representing the case for pragmatism. Far from flashy, Klobuchar won a commanding re-election victory this year in a Midwestern state, potentially boosting the argument that she could win in a region that helped send Trump to the White House. Other prospects in this camp include Sens. Sherrod Brown of Ohio and Bob Casey of Pennsylvania, each of whom cruised to re-election in states that Trump carried in 2016.

But this isn't an easy argument to make to activists in early voting states who are not just hungry to beat Trump, but also long for inspiration reminiscent of Barack Obama's early campaign, when thousands in Iowa were drawn to his distinctive oratory and biography. That could help prospects such as Sens. Kamala Harris of California and Cory Booker of New Jersey along with Beto O'Rourke, whose narrow loss in the 2018 Senate race in Republican-heavy Texas has fueled speculation about his national prospects.

"The electability argument is less emotional," said John Norris, a veteran Iowa Democratic operative who led John Kerry's successful 2004 caucus campaign. "And this will be an emotional election, I think."

Still, the pragmatics point to the math a Democrat will need to get to 270 electoral votes.

A Democrat could conceivably return to the White House by holding Minnesota and winning back any of a number of combinations of Ohio, Pennsylvania, Michigan or Wisconsin, typically Democratic presidential states Trump narrowly carried. Klobuchar, Brown and Casey could be well suited for this role.

Klobuchar won a third term this month, getting 60 per cent of the vote and carrying vast stretches of rural western and northern Minnesota that Trump won two years ago.

Brown won a third term by six percentage points in Ohio, where Trump won by 8, on a day Republicans also held the state's governorship, all of its U.S. House seats and majorities in the legislature.

And yet the road to the White House is paved with failed candidates who made their dominance of a particular state a central selling point.

In 2003, Democratic Sen. Bob Graham campaigned as one of the most successful candidates in Florida, where the contested 2000 election was decided. But Graham dropped out of the race before the Iowa caucuses, crowded out by Kerry, North Carolina Sen. John Edwards and Vermont Gov. Howard Dean, who campaigned individually as inspirational figures on national security, economic populism and opposition to the war in Iraq.

In 2008, the historic potential surrounding Obama and Hillary Clinton pushed out other Democrats early such as Indiana Sen. Evan Bayh, who saw their home state success as a strategic advantage.

Republicans have faced the same challenge. Former Minnesota Gov. Tim Pawlenty bet heavily on being a Republican in Democrat-leaning Minnesota as a chief argument in his bid for the 2012 nomination, but was nudged out by a combination of emerging stars Michele Bachmann and Rick Perry.

Likewise, Gov. Scott Walker approached the 2016 campaign having won, and beat back a recall effort, in swing state Wisconsin, only to be quickly eclipsed in the race to be the alternative to Trump.

But Klobuchar's play could be as much about style as it is electoral strategy. In the era of Trump, where boisterous, public insults are the rule, Klobuchar pushed her persona of competence. In effect, the self-effacing Klobuchar known for her neighbourlydemeanour and penchant for bowling alleys could be the stylistic anti-Trump.

"She seems very down to earth and common, like we can relate to her," said Bryce Smith, Democratic chairman in Dallas County, Iowa, where Klobuchar is scheduled to visit Saturday. "I think she falls closer to the inspirational side than many think."

Brown could pose a challenge to Klobuchar for that mantle. More devoutly liberal than Klobuchar on issues such as health care, Brown carries the torch of an ardently pro-labour populist, which could resonate in those pro-Trump pockets.

So could Montana's Democratic Gov. Steve Bullock, who, as he weighs a 2020 campaign, is touting not just being re-elected in a state Trump carried by 20 percentage points, but testing a message of unity as he works with a Republican legislature.

"Judging whether a candidate can win the general election will be part of the calculus voters consider," said former Obama and Clinton adviser Jennifer Palmieri. "But it's a mistake to think that a candidate can't be both inspiring and electable."