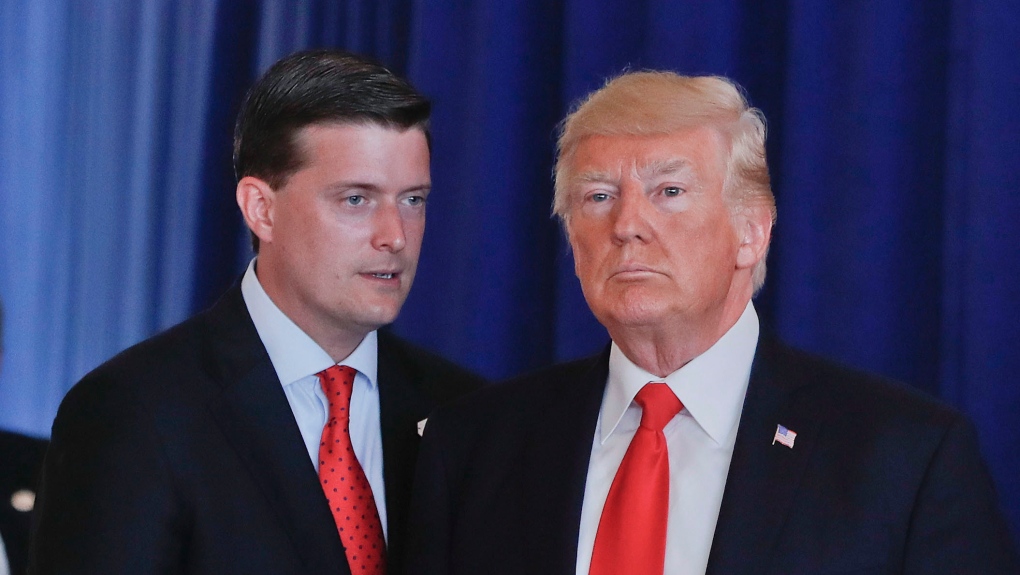 WASHINGTON -- The White House has instructed two former aides to President Donald Trump not to appear at a House Judiciary Committee hearing Tuesday, saying Rick Dearborn and Rob Porter are "absolutely immune" from testifying at what the panel is calling its first impeachment hearing.

In a letter sent to the panel and obtained by The Associated Press, White House counsel Pat Cipollone wrote that the Justice Department has advised -- and Trump has directed -- Dearborn and Porter to defy subpoenas because of "constitutional immunity." Lawyers for both men said they would follow Trump's orders.

Former Trump campaign manager Corey Lewandowski, who never worked for the White House, is expected to attend the hearing as its sole witness on Tuesday. In a separate letter, Cipollone said Lewandowski should not reveal private conversations with Trump beyond what is already public in special counsel Robert Mueller's report.

House Judiciary Committee Chairman Jerrold Nadler invited the three men to testify at the hearing as part of the panel's probe into Mueller's report and what Nadler is calling an "aggressive series of hearings" this fall to determine whether Trump should be impeached. But the committee has so far been hobbled by the White House's blockade of witness testimony and document requests, and House Speaker Nancy Pelosi has said she wants to wait to see what happens in court before making a decision on impeachment.

Cipollone wrote that Dearborn and Porter were advised not to attend "because of the constitutional immunity that protects senior advisers to the president from compelled congressional testimony, and in order to protect the prerogatives of the Office of President."

Democrats are challenging such claims of "absolute immunity" in a lawsuit against former White House counsel Don McGahn, who defied a subpoena earlier this year on Trump's orders. They say that such a claim does not legally exist.

In the letter regarding Lewandowski, Cipollone wrote Nadler that his conversations with Trump "are protected from disclosure by long-settled principles protecting executive branch confidentiality interests."

In a statement, Nadler said the White House's position is "a shocking and dangerous assertion."

He added: "The President would have us believe that he can wilfully engage in criminal activity and prevent witnesses from testifying before Congress -- even if they did not actually work for him or his administration."

Brant W. Bishop, Porter's lawyer, said in another letter to Nadler that his client was trapped between "competing and incompatible demands from co-ordinate and coequal branches" and would, for now, defy the subpoena. He indicated that Porter would testify if he was instructed to by the courts.

"Such conflicting demands must be resolved through an accommodation between the executive and legislative branches, or by the Judiciary," Bishop wrote. "In the meantime, because the inquiry at issue relates to his service as a senior official at the White House, Mr. Porter must respect the White House's instruction."

At the hearing on Tuesday, Lewandowski would be free to discuss Trump's campaign, which he worked on until he was fired in the summer of 2016. But the Judiciary panel is most interested in Mueller's report, and whether Trump obstructed justice. The report said the president could not be exonerated on that point.

According to the report, Trump asked Lewandowski twice to ask Attorney General Jeff Sessions to limit Mueller's investigation. Trump said that if Sessions would not meet with Lewandowski, then Lewandowski should tell Sessions he was fired.

Lewandowski never delivered the message but asked Dearborn -- a former Sessions aide -- to do it. Dearborn said he was uncomfortable with the request and also declined to deliver it, according to the report.

Porter, a former staff secretary in the White House, took frequent notes during his time there that were detailed throughout the report. He resigned last year after public allegations of domestic violence by his two ex-wives.