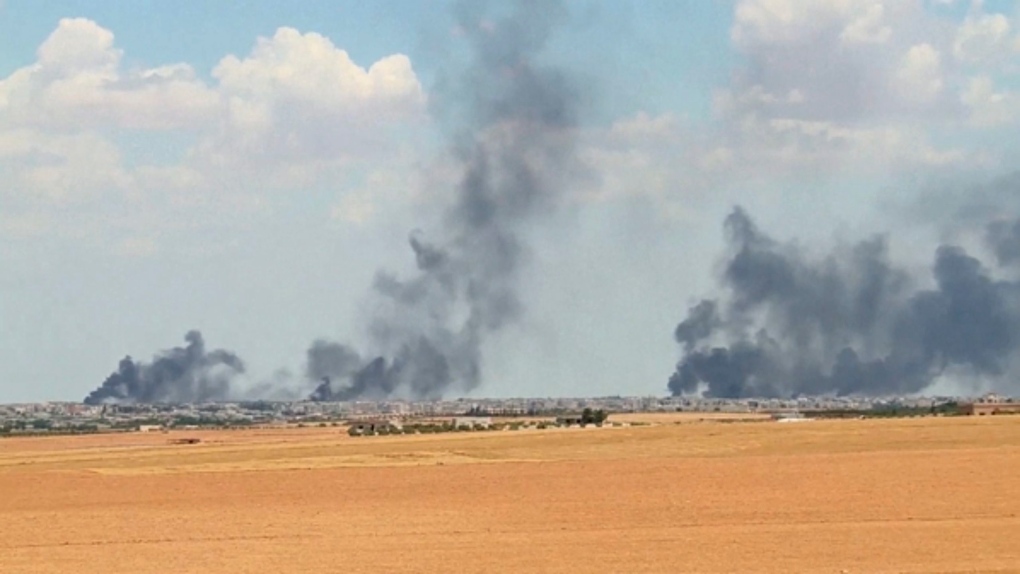 This Wednesday June 8, 2016 video grab shows smoke rising from the city of Manbij, Syria. U.S.-backed fighters on Thursday closed all major roads leading to the northern Syrian town of Manbij, a stronghold of the Islamic State group, and surrounded it from three sides, officials and Syrian opposition activists said. (ARAB 24 via AP)

BEIRUT -- Kurdish-led fighters completed their encirclement Friday of a key town held by the Islamic State group in northern Syria, part of a Western-backed offensive that could see a major strategic victory over the militants.

The advance on Manbij, near the Turkish border, coincided with a Syrian army offensive supported by Russian airstrikes that brought troops closer to the city of Raqqa, the IS extremists' de facto capital.

Two years after their blitz across the Euphrates River valley, the IS militants are coming under increasing pressure on territory they control in Syria and Iraq, as well as on a stronghold in chaotic Libya.

In another battleground of Syria's civil war, minimal food deliveries finally reached the Damascus suburb of Daraya, which has been besieged and blockaded by government forces for nearly four years, but opposition activists said heavy bombardment held up the aid's distribution.

The surrounding of Manbij by the Syria Democratic Forces followed the capture of dozens of nearby villages and farms near the Turkish border by the predominantly Kurdish group.

The coalition, backed by the U.S. and France, has been pressing an offensive since late May to try to capture the Islamic State stronghold, one of its largest in Aleppo province. Manbij is a waypoint on an IS supply line between Raqqa and the Turkish frontier.

The opposition Syrian Observatory for Human Rights said an IS commander from North Africa was killed in the latest round of fighting. More than 130 jihadists have been killed since May 31, when the SDF offensive began.

If the SDF captures Manbij, it will be the biggest strategic defeat for IS in Syria since July 2015, when it lost the border town of Tal Abyad, another major supply route for the militants.

The campaign coincided with a Syrian army offensive that brought troops to about 15 kilometres from the IS-held air base of Tabqa near Raqqa. Backed by intense Russian airstrikes, the Syrian troops seized a major intersection that leads to the air base and nearby oil fields, according to state media and the Observatory.

The latest push by SDF in the Manbij area has almost isolated IS positions in Aleppo province from the Turkish border.

In neighbouring Iraq, government forces cleared more territory won back from the Islamic State group on the southern edge of Fallujah, held by the militants for more than two years.

Iraqi forces pushed deeper into the city about 65 kilometres west of Baghdad after a protracted fight this week, under cover of heavy airstrikes by a U.S.-led coalition.

As armoured bulldozers and units in Humvees cleared houses in the Shuhada neighbourhood, IS launched mortars and rockets at the troops. One such counterattack Thursday wounded a commander and three other men.

Humanitarian conditions for about 50,000 people trapped inside Fallujah are increasingly dire, according to the United Nations.

The fighting in Syria is part of a wider civil war that has consumed the entire country and killed more than a quarter of a million people since March 2011. Half the prewar population has been displaced and many have died due to sieges by one side or the other as food became another weapon of war.

Daraya, a southwestern suburb of Damascus, has been under siege by government forces since November 2012 and has seen some of the worst bombardment of the war. Severe malnutrition has been reported among its few thousand residents because of food and medicine shortages.

Convoys organized by the Syrian Arab Red Crescent and the United Nations brought food, flour and medical supplies to warehouses in Daraya late Thursday and early Friday, after the UN said the Syrian government had approved access to 15 of 19 besieged areas within Syria.

Activists and local council members were to distribute the aid Friday in Daraya, but the Observatory reported new government airstrikes.

French Foreign Minister Jean-Marc Ayrault expressed "indignation" at the bombings after the aid delivery and accused the government of "extraordinary duplicity." He spoke to reporters at U.N. headquarters in New York after presiding over a Security Council meeting on the protection of civilians during peacekeeping missions.

An opposition activist in the suburb alleged the government allowed in only minimal amounts of food in order to create conflict among the starving residents.

"Nothing has been distributed so far and the barrel bombs are falling on the city," said media activist Muhannad Abu al-Zein. "They allowed in foodstuffs for a quarter of the families here."

The U.N. estimated that 4,000 to 8,000 people are in Daraya, which has been subject to the crippling blockade since its residents expelled security forces in the early stages of the 2011 uprising against President Bashar Assad.

"We are seeing a definite improvement on the humanitarian situation and humanitarian supplies," said UN Ambassador Vitaly Churkin of Russia, which is Assad's most powerful ally.

"The Syrian government approved almost entirely the (UN) humanitarian plan in June," he said. "We hope that things will improve."

But Daraya-based opposition activist Shadi Matar said: "The amount of food is not enough."

"The aid delivered is enough for 2,400 people at a time when there are 8,300 besieged persons," he said by telephone.

Last week, a convoy from the UN, the International Committee of the Red Cross and SARC reached Daraya with medicine, baby formula and "nutritional items for children" -- but no food.

The UN estimates that 592,700 people live under siege in all of Syria, with about 452,700 of them under blockades by government forces. Lifting sieges on rebel-held areas was a key demand by the opposition during peace talks that failed earlier this year in Geneva.

A World Food Program official said in an online video posted by Daraya activists that WFP delivered food rations that would feed about 2,400 people for one month.

The WFP official, who was not identified by the activists posting the video, said he had met with community leaders and some recipients of the food aid.

"Most families have to do with one meal per day in order to be able to get by," he said.

A statement by the UN Office for the Coordination of Humanitarian Affairs said the operation finished before dawn Friday.

"This delivery was successful, but the UN continues to call for unconditional, unimpeded, and sustained humanitarian access to all people in need" across Syria, it said, adding that 4.6 million people are living in hard-to-reach and besieged areas.

Amateur video online showed UN SUVs and white SARC trucks driving through sand barriers in the dark and met by opposition fighters. The video appeared genuine and corresponded to other Associated Press reporting.

Joining the convoy were the UN humanitarian co-ordinator for Syria, Yacoub El Hillo, and Khawla Mattar, a spokeswoman for the UN special envoy to Syria, Staffan de Mistura, according to activists' photos posted online.

Russia's Churkin said a "great worry" was the situation in Aleppo, where the al-Qaida-linked Nusra Front has stepped up military activity and "numerous civilian casualties" were reported from the group's shelling.

Meanwhile, the international watchdog group Reporters Without Borders said a photographer Osama Jumas, employed by the British photo agency Images Live, was killed June 5 in Aleppo. It said he was wounded while covering a government artillery bombardment and was in an ambulance that later was hit by a shell, killing him and the driver.

Associated Press writers Edith M. Lederer at the United Nations and Susannah George in Baghdad contributed to this report.