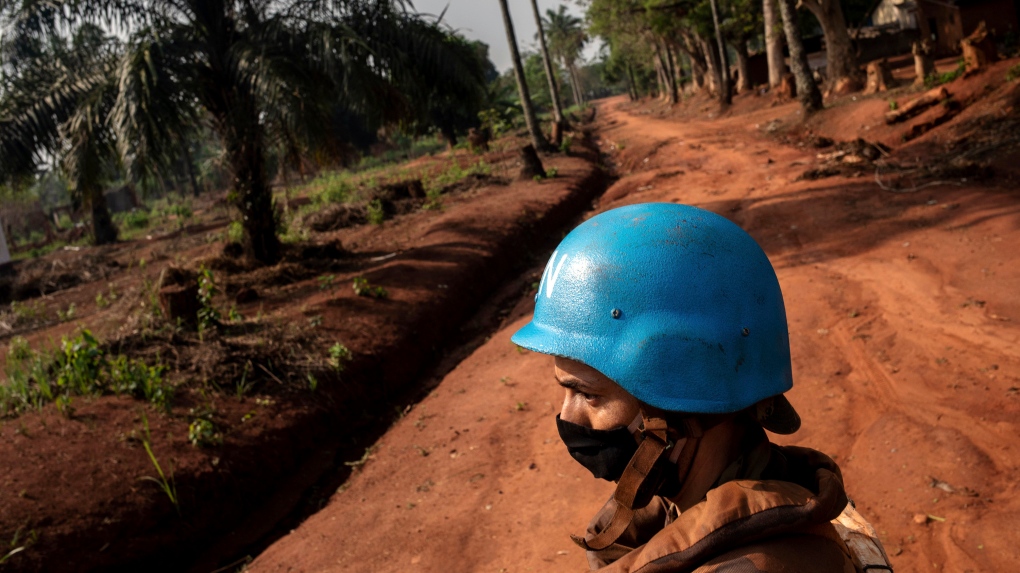 Moroccan UN peacekeepers patrol Bangassou, Central African Republic, Sunday Feb. 14, 2021. An estimated 240,000 people have been displaced in the country since mid-December, according to UN relief workers, when rebels calling themselves the Coalition of Patriots for Change launched attacks, causing a humanitarian crisis in the already unstable nation. (AP Photo/Adrienne Surprenant)

The exchanges took place at a UN Security Council meeting after the UN special representative for the conflict-wracked Central African Republic, Mankeur Ndiaye, expressed serious concern at the military counter-offensive by the country's security forces and "bilateral forces and other security forces" against a coalition of rebel groups which supports CAR's former president Francois Bozize.

Ndiaye called the situation in CAR "among the most dangerous in the world," saying violations of human rights and international law allegedly committed by CAR forces "and bilateral and other personnel ...have never equaled those recently committed and detailed by MINUSCA," the 15,000-strong UN peacekeeping force in the country.

While Ndiaye didn't identify "the bilateral forces and other security forces," Russia has troops in CAR training its military at the invitation of the government.

He said people in the country continue to face an "unacceptably high level of violence."

The mineral-rich Central African Republic has faced deadly inter-religious and inter-communal fighting since 2013.

A peace deal between the government and 14 rebel groups was signed in February 2019, but violence blamed on former president Bozize and his allies threatens to nullify the agreement.

It erupted after the constitutional court rejected Bozize's candidacy to run for president in December. Faustin Archange Touadera won a second term with 53 per cent of the vote, but he continues to face opposition from rebel forces linked to Bozize.

U.S. deputy ambassador Richard Mills noted secretary-general Guterres' report of a 28 per cent increase in incidents of human rights violations and abuses and violations of international humanitarian law over the past four months.

He said the United States is deeply concerned at the increased targeting of Muslims, and the alarmingly sharp increase in abuses committed by national and bilateral personnel.

"I think we need to be clear about these bilateral personnel -- the individuals committing what many are now referring to as atrocities' are not independent actors -- they are operating as extension of Russia's Ministry of Defense," he said.

Mills said the Biden administration is "deeply disturbed" that Russia has failed "to prevent its mercenaries from impeding MINUSCA's freedom of movement on a daily basis."

He condemned an "appalling incident in which these bilateral Russian actors threatened" MINUSCA's deputy special representative and a UN delegation on a humanitarian mission to Bang, , which is close to CAR's border with Chad and Cameroon, on May 28.

He said reports by the secretary-general and UN experts monitoring sanctions against CAR "point to the responsibility of a new actor, who is operating alongside the Central African armed forces and whose status is a mystery."

"Some will try to deny the presence of the Wagner company," De Riviere said, calling on MINUSCA to provide details of who the men are fighting in CAR and who they are accountable to for their actions. The Wagner Group is a Kremlin-backed security company that was implicated in the conflict in Libya.

Britain's deputy ambassador James Roscoe said the armed groups are "fomenting instability, frankly, in order to line their own pockets."

"And now, a new factor of instability: Russian private military companies acting in concert with the national armed forces to obstruct MINUSCA and to violate the rights of the civilians and citizens of the Central African Republic," he said.

Roscoe said human rights violations, including acts of sexual violence, are not only being committed by armed groups "but also by members of the national armed forces and the Russian private military personnel accompanying them."

He said the Russians will deny this, "but the evidence is increasing and overwhelming, and I hope they will reflect on the role they want to play in the Central African Republic and their responsibilities as a permanent member of this council."

She said there are constant "dubious" attempts to discredit them without any evidence, especially in the U.S. and French media which use anonymous sources.

"As for the unfounded allegations coming from the U.S., they're not done by chance," she said. "Our colleagues seem to see Russian instructors or mercenaries everywhere."