'We love it': Family stands by 'sexist' pose they say is all in fun 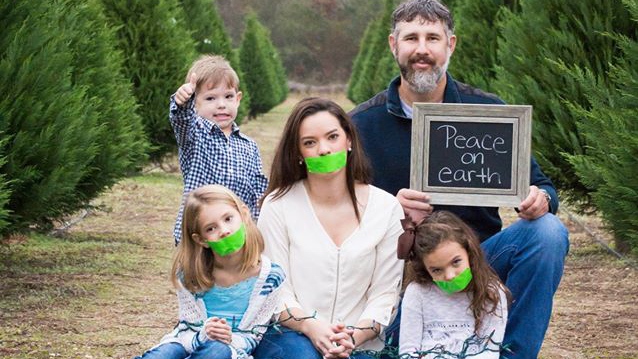 The Johnson family of Louisiana generated controversy with this Christmas card, which they say is just a joke but others view as sexist. (Hannah Hawkes Photography)

A Louisiana family whose Christmas card has generated widespread accusations of sexism on Facebook says it’s just a joke and people who don’t like it should just keep scrolling.

The Johnson family’s card shows mother Lanie Johnson and her two daughters with their hands tied by Christmas lights and green tape over their mouths, while father James Johnson holds a chalkboard that reads “Peace on Earth” and their young son gives a ‘thumbs up.’

The photo has generated more than 3,000 comments since it was posted by the photographer Sunday, plus nearly 5,000 likes and more than 5,000 shares.

Critics say it sends a “disgusting” message that women and girls either talk too much or shouldn’t be allowed to speak, while supporters say it’s all in good fun.

“The message of the photo seems to be that things are better for the people who count (men and boys) when women and girls are silenced and restrained,” wrote Gaye Groover Christmus, just one of hundreds of commenters who panned the card.

“Not sure how that is funny or festive,” the commenter added, “especially since that is the daily reality for millions of women around the world, and some women in the US.”

Commenter Don Davis, on the other hand, was amused. “What a funny picture, wish I had thought of it,” he wrote. “Down with Politically Correct ideas that make us afraid to live and laugh!”

Lanie Johnson, the mother on the card, told ABC News that it was her idea to take the photo, inspired by a similar one she saw on Pinterest. “All the negative feedback was really disheartening,” she added.

Father James Johnson said he thinks people should “take it for what it is -- a family photo.”

“If you like it, great. We love it. If not, scroll up and about a half second later you’re not even going to see it,” he added.

Photographer Hannah Hawkes posted on her Facebook wall Wednesday to affirm that she does, “NOT and (has) never promoted violence to women,” and does “not support abuse, or the degradation of women.”

“I have been called every name in the book, and have received some very hateful and vulgar comments and messages,” Hawkes added.

“I personally know this family, and have known them for many years,” she went on. “They are not abusive to their children in any shape or form. I would like to add that no one was harmed during the process!”

Hawkes then invited strangers to share their “funny” cards, which elicited many more photos of women with tape across their mouths or hands tied by Christmas lights, but also photos with men’s mouths taped while women and girls gave the ‘thumbs up.’