Watching the U.S. midterms? Here's what you need to know

On Nov. 6, U.S. residents will head to the polls in what may end up being a critical referendum on U.S. President Donald Trump’s first two years in office.

Traditionally, midterm elections suffer from low voter turnout. The 2014 midterms saw the lowest participation rate since 1942 when only 36.7 per cent of the population voted, according to the United States Elections Project.

But this year the parties are hoping that voters will show up in force, with key issues like immigration, health care, and LGBT rights on the table.

The Democrats view the election as a chance to take back power in the house and provide some checks against the Trump Administration, while the Republicans are hoping to reaffirm their mandate.

With Election Day less than a week away, CTVNews.ca presents a primer on the U.S. midterm elections.


What are the midterms?

The midterms are general elections that take place every four years in the middle of the president’s term in office.

The midterms see positions at several levels of government up for grabs.

All of the 435 seats in the House of Representatives, where members serve two year terms, will be voted on.

Currently the Republicans hold a majority in the house with 235 seats to the Democrats 193. There are also seven seats that are vacant.

Only 218 seats are needed to control the house.

Thirty-five senators also have their six-year terms ending, putting more than a third of the 100 senate seats up for grabs. Twenty-four of the seats being voted on currently belong to Democrats, nine to Republicans, and two are independent candidates, including Sen. Bernie Sanders.

A party requires 51 seats for control of the senate, though the Republicans only need 50 seats, as Vice President Mike Pence serves as the deciding vote in the case of a tie. 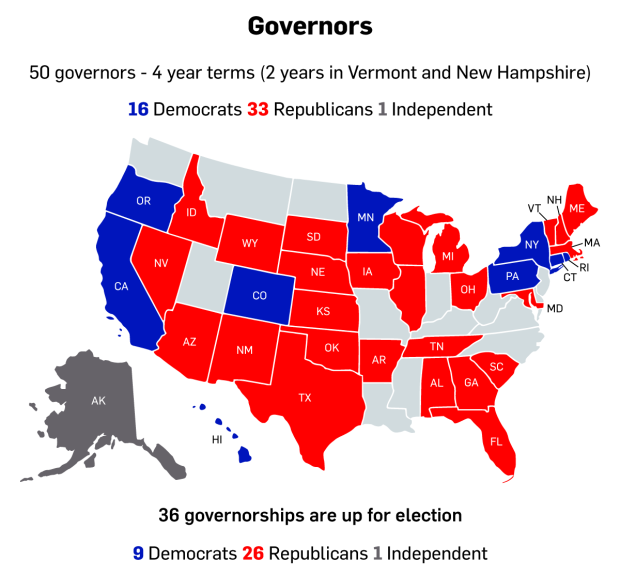 The 2018 midterms also sees several gubernatorial races, with 36 states heading to the polls to elect a new governor.

The offices available are currently held by 26 Republicans, nine Democrats, and one independent.

Many states also elect their state legislatures, municipal officials, and other local public offices at the same time.


What are the issues?

Immigration has become one of the premier issues of the upcoming election, with Trump framing the midterms as a sort of referendum on immigration.

Recently Trump has been vocally opposed to the caravan of migrants traveling from Honduras to the U.S. border.

He has accused the Democrats of supporting the group and has announced that 5,200 troops will be sent to protect the southwest border.

In recent days he’s also floated the idea of building tent cities to house asylum seekers, and talked about ending U.S. citizenship rights for the children of non-citizens born in the country.

Health care is another prominent concern this election, with nearly half of aired federal political ads mentioning the topic, according to the Wesleyan Media Project.

Trump has accused the Democrats on Twitter and in a recent USA Today op-ed of threatening to destroy Medicare, with their Medicare for All proposal.

The plan, championed by some of the most recognizable Democrats including senators Bernie Sanders and Elizabeth Warren, would expand Medicare to cover almost everyone in the country and would theoretically kill the private insurance business in the United States.

But Democrats are firing back against Trump’s accusations, making sure voters know that many of the Republicans in the house or senate voted for the full repeal and replacement of the Affordable Care Act – a popular piece of legislation.


What are some of the key races in the election?

Texas has been a battleground state for years, with Democrats trying to utilize the state’s changing demographics to turn the Lone Star State, blue.

Though Tennessee hasn’t had a Democrat senator since 1990, the retirement of Senator Bob Corker has left the question of who gets the historically Republican seat.

The race between Rep. Marsha Blackburn and former governor Phil Bredesen is surprisingly tight for a state that elected Trump by 26 points, with the majority of polls putting Blackburn in the lead by less than 10 points.

But Bredesen got one endorsement that may prove crucial – Taylor Swift. The pop star, who broke her long-standing refusal to discuss politics to endorse the Democrat, caused a spike in voter registration after a social media message to her almost 113-million followers.

In what will be a state first, Arizona will elect their first female representative to the senate, regardless of who wins the election.

The traditionally red state is up for grabs following Sen. Jeff Flake’s seat being vacated, with Rep. Kyrsten Sinema hoping to appeal to the state’s centrists as part of the Blue Dog Coalition of conservative Democrats.

It may allow her to pick up some extra support, after McSally, a formerly vocal critic of Trump and noted centrist, moved towards the right and became the Republican establishment candidate.


How will it affect the rest of Trump’s term?

The midterms have a lot riding on them this year, with both Democrat and Republican voters particularly motivated to head to the polls.

For Democrats, the midterms are a chance to take control of the house and have a means to slow or stop the Trump administration from passing controversial legislation.

A democrat-controlled house could also result in more investigations, with Pelosi saying they would help Robert Mueller conclude his Russia investigation.

For Republicans, the election is a chance to have their mandate reaffirmed. Maintaining the house would allow them to push ahead on major issues like health-care reforms and funding for Trump’s border wall.

See the results of the U.S. midterms on Tuesday, Nov. 6 by going to ctvnews.ca/americavotes