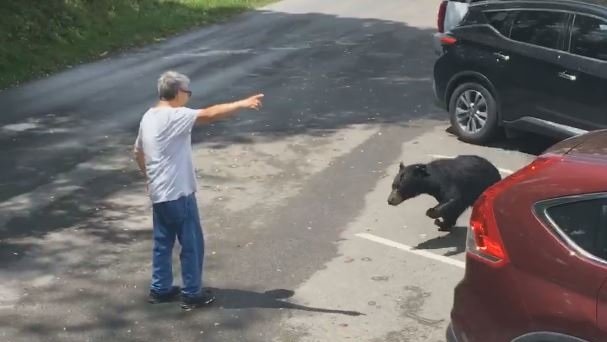 A man at a Tennessee national park got a warning from a mama bear after he got too close to a group of bear cubs. (Storyful/Paige Marple)

A man at a Tennessee national park got a warning from a mama bear after he ventured too close to her cubs.

The incident was captured on camera by an onlooker, who noted in a Facebook post that signs at the Cades Cove valley warn people to stay 50 yards (45 metres) away from animals.

“This man did not listen and could have died because of it. I don’t know how he’s still alive honestly,” wrote Paige Marple. The video has been viewed more than half a million times since Saturday.

The clip shows the bears emerging from tall grass and approaching a small parking lot and road. The man approaches the three bear cubs with his palm outstretched but they run ahead following the older bear crossing the road. The man then approaches the larger bear pointing toward the field from where they came, apparently attempting to usher them back to the valley. That’s when the bear lunges towards the man. He recoils and retreats as the bear cubs run into the woods across the road.

The Tennessee Wildlife Resources Agency stresses that park visitors should “never feed or approach bears.” This is for the safety of both human and bear, says the TWRA.

“Bears that habituate to human presence eventually become a threat to human safety,” they write online. “The end result is that such bears are often killed by intolerant and/or fearful landowners or have to be destroyed by the TWRA.”