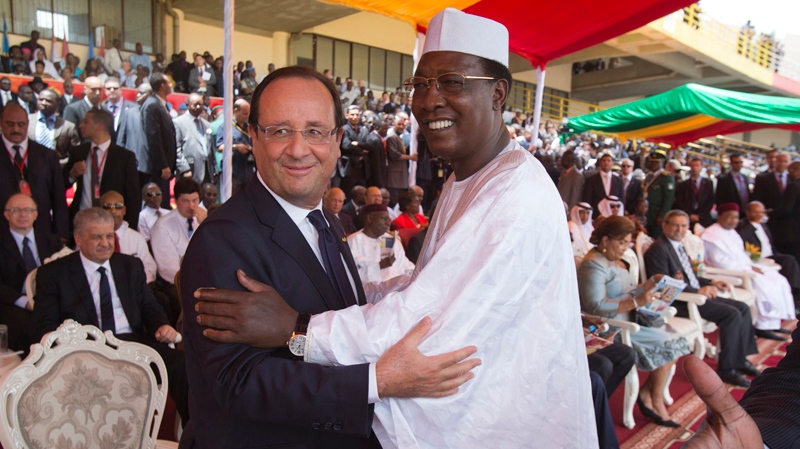 BAMAKO, Mali -- French President Francois Hollande declared Thursday the war against Islamic extremists had been won in Mali, though he vowed to keep French forces in the West African country as long as the threat exists.

Hollande spoke before more than a dozen heads of state at inauguration festivities for Malian President Ibrahim Boubacar Keita, who overwhelmingly won the election that France urged Mali to hold only months after the radical jihadists had been largely ousted from power in northern Mali.

"We have won this war; we have chased out the terrorists; we have secured the north and finally ... we have, you have organized an uncontested election and the winner is now the president of Mali," Hollande told the crowd gathered at a sports stadium in the Malian capital.

"If there had not been an intervention, today the terrorists would be here in Bamako," he said.

Later at a news conference held in Mali's capital, Hollande pledged that French forces would continue to aid the Malian military "so long as the threat exists." He also vowed to continue pursuing the six French hostages who are being held by al Qaeda's North Africa branch.

"We should seek to do all that we can to liberate them," he said.

Several Islamic militant groups were able to seize control of northern Mali in the aftermath of a March 2012 coup in the distant capital of Bamako. Once in power, they instituted their harsh interpretation of Islamic Shariah law, meting out amputations and whippings as punishments and forcing women to wear veils in public.

As they threatened to push further south, France launched a military operation in January that was joined by soldiers from a number of neighbouring countries. The Jihadists retreated from major centres in the north including Timbuktu and Gao.

However, some analysts cast doubt on Hollande's claim of victory.

There are "persistent reports that jihadists have either started filtering back into Mali or never left," said Andrew Lebovich, an analyst who focuses on political and security issues in the Sahel and North Africa.

"While the French intervention reversed the jihadist push south, significantly degraded the capacity of regional terrorist groups to operate in Mali and killed or scattered a large number of fighters and commanders, it is a stretch to say that the war is won," he said.

Hollande also addressed questions Thursday about why France had intervened militarily in Mali but not in Syria. Mali's president had asked for French help, Hollande said, adding: "each situation is different."

Keita formally took the oath of office two weeks ago as was required by the country's constitution. On Thursday, Malians in their finest suits and traditional gowns poured into a sports stadium for the festivities, fanning themselves with programs in the heat and shading themselves with umbrellas.

The new president entered the stadium standing in the back of a military jeep draped in Malian flags, wearing a yellow sash accented in the other colours of the national flag -- red and green. Throngs of soldiers ran alongside his vehicle, holding hands to form a barricade against well-wishers approaching him.

Keita spent much of his speech thanking regional leaders for their help in dislodging the extremists, and pledged to restore Mali's democratic institutions that were battered by the coup and the months of chaos that followed.

"The path will be long, but we will get there with the participation of all Malians," he said.

Keita emerged from a field of 28 candidates to overwhelming win the August presidential runoff election, taking nearly 78 per cent of the vote in the second round.

Among his greatest challenges will be resolving the simmering secular separatist rebellion in the northern region of Kidal. Ethnic Tuaregs there have sought sovereignty ever since Mali's independence from France in 1960 and their latest rebellion last year gained momentum in the power vacuum after the coup. While they were temporarily sidelined during the rule of the radical jihadists, the Tuareg separatists are now largely back in control of Kidal and the return of the Malian military remains deeply unpopular.

Talks are set to begin within two months' time between Keita's new government and the group known as the National Movement for the Liberation of Azawad, the name rebels use to describe their homeland.