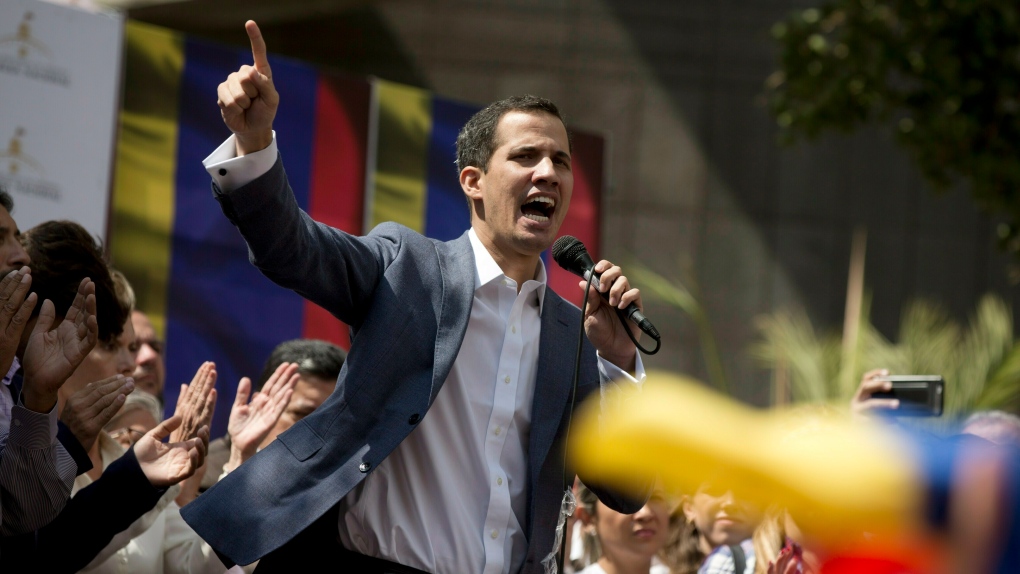 Juan Guaido, President of the Venezuelan National Assembly delivers a speech during a public session with opposition members, at a street in Caracas, Venezuela, Friday, Jan. 11, 2019. (AP Photo/Fernando Llano)

CARACAS, Venezuela -- The Venezuelan opposition leader challenging Nicolas Maduro's claim to the presidency warned officers from a feared state security unit Thursday to stay away from his family after he accused them of showing up at his apartment in a tense brush with the very force he is trying to persuade to switch allegiance and back him.

A visibly flustered but determined Juan Guaido told a crowd gathered at a university that members of a special police unit known for its brutal tactics had gone to his high-rise apartment in a middle-class neighbourhood of Caracas while his 20-month-old daughter was inside.

"I hold you responsible for anything that might happen to my baby," the 35-year-old lawmaker said as his wife stood beside him.

He rushed home and emerged an hour later holding his smiling daughter, named for Francisco de Miranda, a Venezuelan patriot who paved the way for Venezuela's independence, and described how four agents from the police's Special Action Force had arrived at the building and asked security guards stationed there for his wife.

"Children are sacred," he admonished the agents as a crowd of supporters applauded. "Wives are sacred. So don't cross that red line."

In a statement on Twitter, Venezuela's police denied that special agents had gone to Guaido's home, dismissing the claim as "totally FALSE."

Guaido is at the centre of Venezuela's political upheaval as he presses forward with establishing a transitional government after swearing himself in as the nation's rightful president in a move denounced by Maduro as a U.S.-backed coup.

In a country where the socialist leader's foes often end up behind bars, Guaido has thus far managed to avoid arrest, but in recent days authorities have let it be known that even as his powerful international support grows Guaido isn't untouchable.

On Tuesday, the government-stacked Supreme Court barred Guaido from leaving the country and froze his bank accounts while chief prosecutor Tarek William Saab, a Maduro ally, conducts an investigation into his anti-government activities.

"Once more they are playing the intimidation game," Guaido said. "They're not going to succeed in intimidating this Venezuelan family."

Even while denouncing the special police force, Guaido appealed to them and the military to abandon Maduro and abide by the constitution, which he contends instructs him as leader of the opposition-controlled National Assembly to take the presidency. The opposition and a large segment of the international community consider Maduro's reelection fraudulent, in part because the president's most popular adversaries were barred from running.

"You have time to put yourselves on the right side of history," Guaido said.

U.S. officials who have warned Maduro will face "serious consequences" if he harms Guaido denounced the incident as a disgraceful intimidation tactic.

"Regime resorts to targeting a 20-month-old baby," Kimberly Breier, the current U.S. assistant secretary of state for the region, wrote on Twitter. "Shame on you Maduro."

Later Thursday, Guaido told The Associated Press that he will defy a government ban on humanitarian aid by sending large convoys of medicine into the country with the help of neighbouring nations. He said the move will be a "new test" for Venezuela's military.

"In a few weeks they will have to choose if they let much needed aid into the country. or if they side with Nicolas Maduro," said Guaido.

Guaido explained that aid for Venezuela will include life-saving medicines that are scarce in Venezuela and will be transported by vehicles arriving at several border points, after it is shipped into "friendly ports" in neighbouring countries.

"We are not just taking aid from the United States," Guaido explained. "But in the next few days we will announce a global coalition to send aid to Venezuela."

A swift end to the tumult appears unlikely as both Guaido and Maduro dig in for a protracted conflict with geopolitical dimensions.

Maduro has been crisscrossing Venezuela overseeing military exercises and vowing to defend his socialist government no matter the cost. The military's top leadership is backing Maduro, though analysts warn that rank-and-file troops frustrated by their country's economic and humanitarian crisis may not share their unwavering loyalty.

Venezuelan officials said Thursday that authorities had taken down a "terrorist" group backed by political opponents plotting to assassinate Maduro. Interior Minister Nestor Reverol said retired National Guard Col. Oswaldo Garcia Palomo was among those detained. Garcia Palomo has been an outspoken critic of Maduro for months and had openly declared his intentions to amass a military force in exile to remove Maduro from power.

Reverol said security forces seized two rifles and 500 armbands bearing the letters "OC," which he said stands for "Operation Constitution." He accused Colombian intelligence, the CIA and exiled Venezuelan lawmaker Julio Borges of being behind the alleged plot.

"We are continuing the investigation and don't discount future arrests," he added.

The government called for a mass rally Thursday to denounce U.S. sanctions against Venezuela's state-owned oil company that could starve Maduro's government of billions in export revenue but turnout was no more than a few hundred people.

Maduro has retained the support of powerful allies, including Russia and China, but he is growing increasingly isolated as more nations back Guaido.

The European Parliament called on the European Union's 28 member states Thursday to recognize Guaido. The regional bloc has not yet defined its position on the crisis amid differing opinions among members, though several nations have said they will recognize Guaido if Maduro doesn't announce a new election by week's end.

The bloc did not come out in support of Guaido after a meeting of foreign ministers in Bucharest, Romania, to discuss the crisis, but EU foreign policy chief Federica Mogherini announced the establishment of a 90-day international conduct group with EU and Latin American states to "promote common understanding aiming at a peaceful and democratic outcome."

The EU legislature also approved a resolution that condemned the continued violence and the detention of journalists who sought to cover events there.

Guaido reappeared Thursday night to address dozens of neighbours and thank them for not letting state security forces intimidate the community. He is urging Venezuelans to take to the streets again Saturday for a mass protest demanding that humanitarian aid enter the country, something the Maduro government has regularly refused, denying that a crisis is underway.