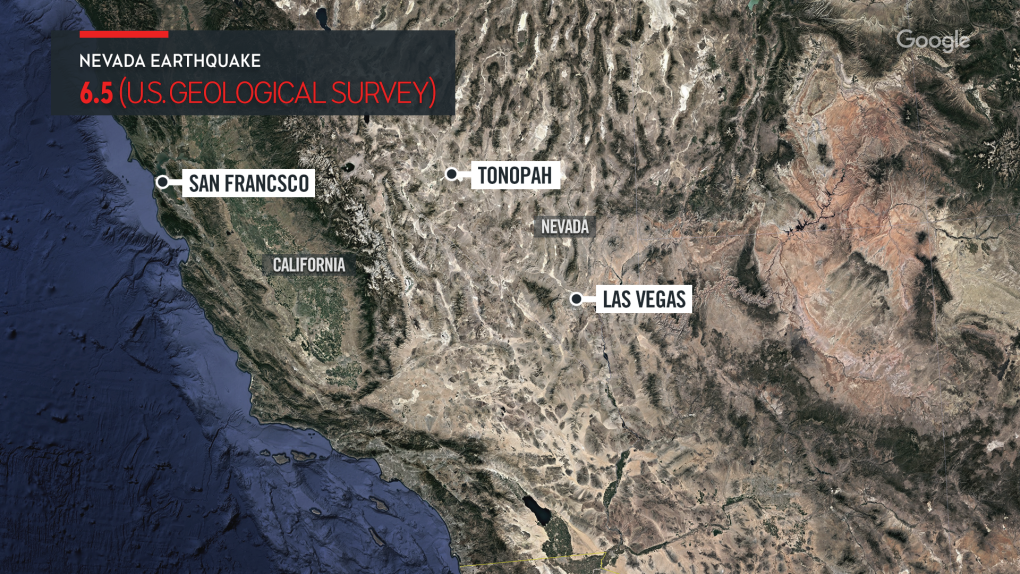 LAS VEGAS -- The main highway between Las Vegas and Reno was damaged and closed early Friday following a magnitude 6.5 earthquake in a remote area of Nevada that a researcher called the largest quake in the state in 65 years.

No injuries were reported, but Nevada Highway Patrol photos showed cracks on U.S. 95 that Trooper Hannah DeGoey said were caused by the temblor a little after 4 a.m. west of Tonopah.

The area is an active seismic region, said Graham Kent, director of the Nevada Seismological Lab at the University of Nevada, Reno. He compared the Friday event with twin December 1954 earthquakes at Fairview Peak and Dixie Valley. Kent said those temblors, occurring four minutes apart, were magnitudes 7.1 and 6.8. Other sources put their magnitudes at 7.3 and 6.9, respectively.

The U.S. Geological Survey reported the the temblor struck at 4:03 a.m. about 35 miles (56 kilometres) west of Tonopah and just east of the Sierra Nevada range. The quake was upgraded after being initially reported at 6.4-magnitude.

It was centred about 4.7 miles (7.6 kilometres) deep, the agency said, and dozens of aftershocks were recorded. Kent said a 5.1 magnitude aftershock struck about 30 minutes after the initial quake.

Keith Hasty, a Tonopah gas station employee, told the Las Vegas Review-Journal that groceries were shaken off shelves and that residents said their televisions shook.

“Overall, everything appears to be sound at this point,” Knightly said. “”However, we have learned that other than obvious earthquake damage some damage is discovered later.“

Last July, a 56-year-old backyard mechanic was found dead in Pahrump four days after strong quakes struck near Ridgecrest, California, about 150 miles (240 kilometres) away. Investigators said it appeared a Jeep he was repairing wobbled off its support jacks.

Larger earthquakes in the region in the last century included a 6.5-magnitude temblor in 1934 and a magnitude 6.8 quake in 1932, the state seismology lab said.

A 6-magnitude earthquake in February 2008 damaged hundreds of structures in the northeast Nevada town of Wells, including its historic El Rancho Hotel and Casino. Officials recently announced plans to restore the hotel.