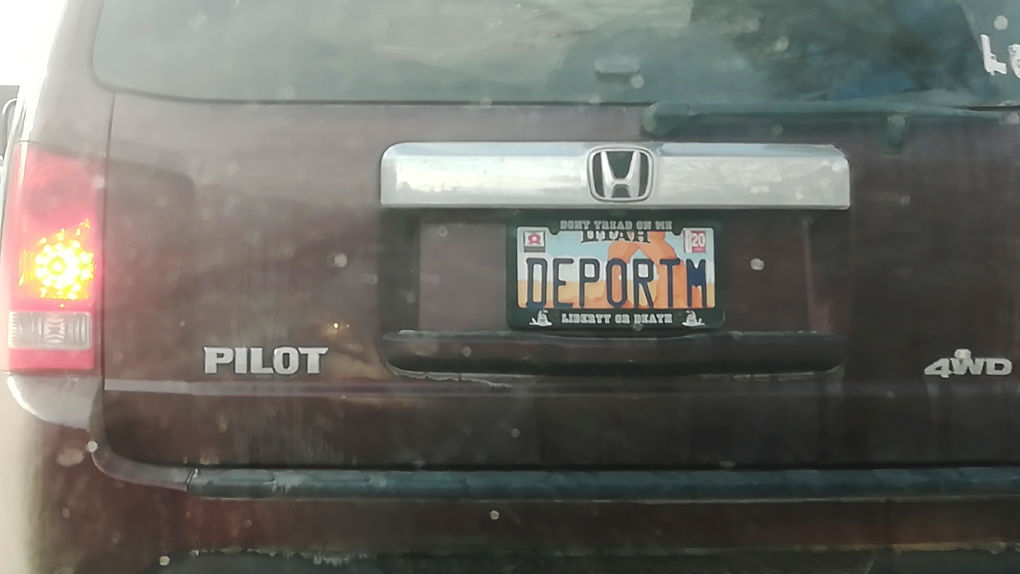 This undated photo provided by Matt Pacenza shows a license plate on a vehicle. Utah lawmakers want to know how a license plate with the phrase "DEPORTM" got approved despite state rules against expressing contempt for any race, religion or political opinion on vanity plates. (Matt Pacenza via AP)

SALT LAKE CITY -- Personalized licence plates that spark multiple complaints will get extra scrutiny in Utah amid questions about how a plate emblazoned with the phrase "DEPORTM" could be on the road despite strict state rules and previous objections.

If more than one person reports a particular plate, it will now be flagged for extra attention and reviewed by the attorney general's office, said Scott Smith, who oversees the motor-vehicles division as executive director of the Utah Tax Commission.

"The safety net here is the general public," Smith told lawmakers at a hearing Wednesday that came after a photo of the "deport" plate gained widespread attention online. Among other rules, Utah prohibits vanity plates that express contempt for any race, religion or political opinion.

Licence plates issued and approved by governments don't carry unlimited freedom of speech rights, he said. Most states have restrictions, and Utah has denied messages ranging from "STRIPPN" to "REDWINE" to "JEWELZZ," according to a list provided to The Associated Press.

Even if approved, plates can be recalled if they are found to break the rules. In the case of the "deport" plate, it's unclear how it was approved in 2015. Since then, complaints from the public have been taken properly, but higher-ups halted the recall process, Smith said. The plate is now under review. The owner has not been identified.

The issue came to the forefront after a picture of the plate gained attention online last week. English teacher Matt Pacenza spotted it in Salt Lake City during his drive home, snapped a quick picture and put it on Twitter and Facebook.

Hey @utahdld, how does this plate I just saw not violate your guidelines? #utpolhttps://t.co/zFDfm8IHxp pic.twitter.com/kt3S2KBh2z

"It did jump out at me. I was surprised by it," he said. So, he did a quick search online. "What you find out right away is they do reject all kinds of plates."

The state, which gets about 450 requests a month for vanity plates, also bars messages that are vulgar, reference drugs or sex acts or suggest something dangerous.

Still, the process can be challenging and is inherently somewhat subjective, Smith said.

With that in mind, Democratic Sen. Luz Escamilla and Republican Rep. Marc Roberts said they'll weigh sponsoring a proposal to put more objective requirements into law. Utah is deeply conservative, but tends to be welcoming to immigrants and refugees.

"We're all humans, and we don't always get it right," Republican Sen. Jacob Anderegg said. "The licence plate all over the news, DEPORTM, I think does not reflect the society's opinion at large, despite where we may have political differences and concerns over aspects of our immigration laws."